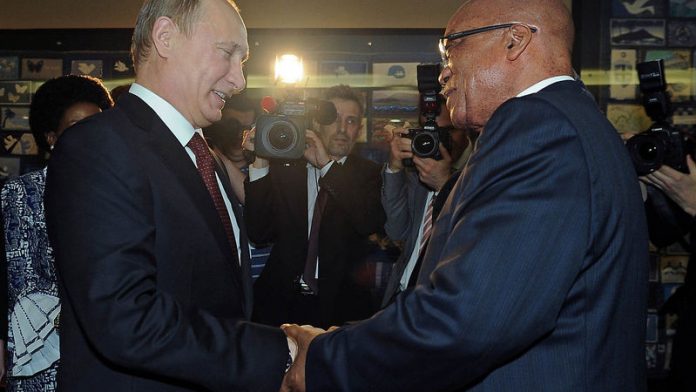 Russia’s bid to secure the estimated R1-trillion nuclear tender has suffered a blow – the South African government has stalled on a co-operation agreement that was supposed to be finalised last month and that the Russians apparently believed would seal the deal.

Sources in both countries speculate that Russia overplayed its hand late last year when its state-owned nuclear vendor Rosatom was well placed to build eight new reactors for South Africa.

After months of high-level lobbying and negotiations between the two countries, Russian media began to report the deal as a fait accompli. In the run-up to the Atomex Africa Forum organised by Rosatom in Johannesburg in November, the state-owned news agency RIA Novosti reported that Rosatom is “to build eight nuclear electricity units in South Africa. Formal agreements about this are to be signed … on the fringes of Atomex”.

But the agreement announced at Atomex was a rather less definitive nuclear co-operation agreement. A nuclear correspondent for another state-owned news agency, Itar-Tass, quoted Energy Minister Ben Martins as saying: “All legal procedures under Rosatom’s agreement with South Africa on co-operation in nuclear energy will be completed by February 15 next year [2014]”. This was confirmed by a Rosatom spokesperson at the time.

Saving face
It has been suggested that Rosatom embarrassed South Africa by letting the cat out of the bag about the reactor deal before the government was ready to make an announcement, and that the nuclear co-operation agreement was a way for both parties to save face while retaining Rosatom as a favoured bidder.

A month beforehand, Business Day reported that an unsigned draft co-operation agreement between South Africa and Russia was circulating among government officials. It reportedly contained a clause giving the Russians a veto over any other agreements South Africa might enter into with other countries – and, thereby, the upper hand.

Responding to the article at the time, Martins’s adviser Robert Nkuna downplayed the significance of the draft agreement, saying it was not final.

Responding to a question this week, Rosatom said: “The document provides the possibility of NPP [nuclear power plant] construction in South Africa based on Russian technologies.”

It did not confirm or deny the retention of the veto clause but blamed Russian journalists for “goal-setting” on nuclear timelines.

Russian media continued to suggest post-Atomex that the co-operation agreement was for reactors, and Russian officials did not contradict them then.

AmaBhungane understands that the February 15 agreement deadline has passed without an agreement being finalised. Rosatom said: “We suppose that these internal procedures [leading to finalising the agreement] in South Africa will be completed in the foreseeable future.”

A source close to the negotiations said that energy department officials have stopped answering Rosatom’s calls, which suggests that the Russians have irritated their would-be partners.

Another source, who claims to have lobbied for the Russians, said that there is a difference between how Russia and South Africa operate. “When something’s done, the Russians believe it’s done, and they say it’s done. But they forget that here in South Africa we have something complicated called a democracy.”

The department did not respond to written questions but Nkuna said: “We have co-operation agreements at various stages with all these countries. Whatever we decide, we will decide in accordance with the law.”

Helmer has flagged a strange deal in which a company with links to President Jacob Zuma intended buying the majority Russian-owned stake in an iron and steel producing company based in eMalahleni, Mpumalanga. Occurring almost in tandem with Russian negotiations on the nuclear deal, this has led Helmer to speculate that the two deals might be connected.

Zuma links
First, Nemascore had been registered only the previous month. Second, one of its directors, Linda Makatini, is Zuma’s one-time legal adviser and a business associate of Zuma’s sons, Duduzane and Mxolisi “Saady” Zuma. Further enquiries have revealed that Nemascore shares an address with the Sandton premises of a law firm belonging to Zuma’s current legal adviser, Michael Hulley.

Third, Nemascore offered Evraz more than double what its stake was worth on the market at the time. The day before the Brics summit began, Evraz Highveld’s market value was only $140-million.

Helmer reported that the Russian state bank VTB would lend Nemascore the money to buy Evraz’s stake, and speculated that it meant cash in hand for Zuma’s connections while the Russians awaited a positive outcome on the nuclear deal. VTB is also expected to offer South Africa the financing it needs should it opt for Rosatom reactors.

The contradiction in Helmer’s theory is that Nemascore’s overpriced offer to Evraz is beneficial to Evraz, not to Nemascore, which has to find the money and then pay it back.

Helmer explained how the contradiction might be resolved: “Evraz is a publicly listed company and receipt of the full $320-million in sale and purchase funds would have to appear on its balance sheet. So, if there is a secondary transaction – a big hypothetical, and one that has yet to be proved – that is more likely to be concealed by the lender to the transaction, VTB, a state bank. VTB is already a lender to Evraz and so, had the transaction gone through VTB would be a creditor to both Nemascore and Evraz simultaneously.

“Accounting for two individual client loans and their repayment within VTB’s loan book would be impossible for outsiders to follow, and probably for VTB’s external auditors too.”

On hold
Furthering Helmer’s theory about parallel deals, the proposed Nemascore buy-out of Evraz has been endlessly deferred, as has South Africa’s decision about nuclear reactors. One week after last month’s nuclear co-operation agreement deadline with Russia passed, Evraz announced on February 21 that new prospective buyers had emerged for its 85% stake. It added that Nemascore was not completely out of the picture.

Both Evraz and a source who identified himself as the public relations representative of the prospective new buyers declined to reveal the new buyers’ identity.

This has led to speculation that either Evraz intends pushing Nemascore – and the nuclear decision-makers – into making up their minds, or Helmer’s exposure of Nemascore’s political connections required a change of strategy.

Nkuna, speaking for the energy department, said: “We are hearing these things for the first time.

We can’t comment on rumours when no evidence has been provided to us.”

Meanwhile, a clutch of Chinese state-owned nuclear vendors appear to have taken the gap, organising a conference on nuclear co-operation in Jo’burg last week. A representative from a rival bidder expressed surprise at the speed with which they organised the conference.

The department announced earlier this week that a draft nuclear co-operation agreement is now under discussion between South Africa and China.

The government put out a tender for two new nuclear power stations in 2008, after rolling electricity blackouts. France’s Areva and the United States’s Westinghouse were contenders, but Eskom cancelled the tender after the bids came in because it was unaffordable.

But the government has pushed ahead with the 2011 plan. In his State of the Nation address last month, Zuma said: “We expect to conclude the procurement of 9 600MW of nuclear energy.” – Lionel Faull