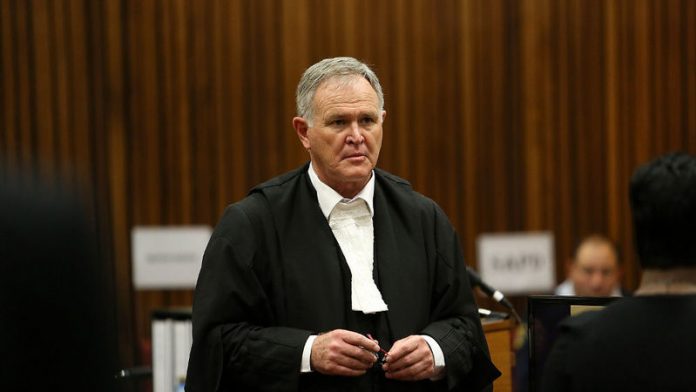 Even before defence advocate Barry Roux worked him over like a chew toy, Charl Johnson described himself as a reluctant ­witness for the state in its case against Oscar Pistorius.

He and his wife had stepped forward only after hearing the version of events on the night of the death of Reeva Steenkamp put forward by Pistorius at his bail hearing, Johnson told the high court in Pretoria. The couple believed they had heard a woman scream; Pistorius had not mentioned anything of the sort. So they felt "morally obliged" to step forward.

Knowing that the Boschkop police station in Pretoria, the station with jurisdiction in the matter, was crawling with media, he said, they avoided it. They assumed that other witnesses would step forward, with the implication that they did not anticipate that they would be required to testify. They wanted to stay out of the spotlight, he said.

But by Tuesday afternoon, what they wanted no longer featured. A picture of Johnson's wife, Michelle Burger, had been published in newspapers and shown on television in conjunction with her testimony. Johnson's cellphone number had been read out in court, and he had received messages he felt were "intimidating".

In court, neither appeared amused by this turn of events. Though media may not approach them directly, both were understood to be somewhere between furious at and fearful of the turn of events.

Marikana mineworkers
Cut to early 2013 at the Farlam commission of inquiry, investigating the circumstances surrounding the deaths of 34 miners at Marikana. Witnesses giving evidence, in particular mineworkers, were being murdered or attacked with a frightening frequency.

One witness was attacked after leaving the commission and beaten until he soiled himself. Another, after his name was published in a local newspaper, received death threats, closed his shop, and left town.

One lawyer at the commission put his witnesses up in hotels for the duration of their testimony, at his own expense, in a last-ditch attempt to stop the killings.

Many were under subpoena, although others stepped forward, and, unlike Johnson and his wife, their testimony was broadcast live on Youtube. They were not granted the courtesy of a court order protecting their identity, in spite of the obvious threat, which Judge Ian Farlam expressed deep concern about.

The only option available to the Farlam witnesses was to be assimilated into the National Prosecuting Authority's (NPA) witness protection programme, an impractical solution for many workers who had families to support.

Victims of media scrutiny
The NPA confirmed this week that none of the Pistorius witnesses had formally applied for protection, although they were free to do so should they feel threatened. Yet their faces are protected by a court order and their privacy considered paramount, in a system that demands open justice and leaves witnesses to deal with the consequences.

Johnson and Burger were both victims and products of the intense media interest in the trial of Pistorius, with a level of coverage unprecedented in South African history. Both told the court that they had stepped forward because they had seen reports on the Pistorius events, and that aerial photographs of the home where he shot Steenkamp helped them to realise that they had probably been ear witnesses to the events of Valentine's Day 2013.

That, however, did not mollify prosecutors, who said that having to complain to a court about the broadcasting of photographs and telephone numbers of witnesses in what may be the most-watched trial in the world to date would do them no favours.

"You tell me, do you think more people are going to go to the police now when they think they know something?" asked a prosecutor – not directly involved in the Pistorius matter – rhetorically. "Or do you think there will be less?"

In theory, prosecutors can summon witnesses using all the coercive power of the state, no matter how reluctant those witnesses may be. In reality, prosecutors say, important cases sometimes hinge on the testimony of witnesses never identified by the police, but who are drawn into a matter by the very moral obligation Johnson cited.

Lambs to the slaughter
Whatever the manner of their arrival in court, they do not always leave court suffused with the warm glow of having done the right thing. Instead, some state witnesses exit the system very angry indeed.

"I was like a lamb to the slaughter," one-time state witness Richard Baird told the Mail & Guardian this week.

Baird was the primary witness for the state in its case against drunk-driving Judge Nkola Motata, who in 2007 drove a car into the wall of a property owned by Baird.

A tenant summoned Baird to the scene, where he recorded audio clips of Motata, making his testimony crucial. But although Motata was ultimately convicted and later lost an appeal, he brought considerable legal weight to the case – and Baird said, in effect, he ended up being the accused. The experience left him bitter.

In a sworn affidavit prepared earlier this year, Baird recounted how his appearance before the court "had massive negative consequences and effect on my family relationships, friendships, business and professional relationships, business interests, stress levels, health, financial position and constitutional rights".

"I would unreservedly not recommend this experience as a state witness to anybody, and especially not small business owners," he said elsewhere in the statement, prepared for a probe by the Judicial Service Commission on Motata's conduct on the night, including allegations that he hurled racial slurs at Baird, who is white. With the drunk-driving case resting on his testimony, much of Motata's defence relied on discrediting him. That included robust – and in Baird's opinion unfair – questioning of his integrity.

Personal attack
Unlike the majority of witnesses in South African courts, Baird is educated and more than passingly familiar with the legal system, and the prosecution team that called him was a senior one.

Even so, he was first taken aback by media interest in the trial, then horrified to see the allegations made against him (including racism and perjury) reported blow by blow.

"It's very unfair to the witness. There is argument; the next thing they look stupid or like they are lying, meantime it is the advocate playing with words, and the judge sees through it, but [in the media] it comes out like there is contradiction, like you are unreliable," he told the M&G this week.

Baird said he had not been prepared for what he was walking into: there had been no warning of the possible impact on his privacy, no indication that he could spend weeks in court, and no warning about the tactics defence counsel could use.

"You are not prepared. You are not given a risk assessment. The state does not care; all it wants is [that] you give evidence."

If there is concern that prosecutors could taint witnesses by preparing them, making their testimony rehearsed, Baird argues that the state could take a leaf from the book of financial regulators and provide standard documents as a briefing, "an orientation pack".

Minimal protection
In the eyes of the court, the Marikana witnesses, Baird and Pistorius' neighbours all played a similar role. Yet the Pistorius witnesses, because their testimony is televised, are receiving more protection from the courts than most witnesses in criminal trials will ever be afforded.

They did not ask for it. Although they did not want to be identified, the principle of open justice requires that all evidence be put in the public domain for scrutiny, to ensure the public's trust in the system.

"The difference with this trial is that it is broadcast live on radio and television after the media successfully applied to have the trial or parts thereof broadcast live," NPA spokesperson Nathi Mncube said this week.

Pistorius's may be the first fully televised trial, but it certainly will not be the last, now that the precedent has been set. Mncube said that, in general, witnesses who felt unsafe could approach the prosecutor or investigating officer to apply for formal protection, with the onus on the witness to pursue protection through the court.

Whether this will be adequate for the next group of neighbours who are awoken by gunshots in the middle of the night remains to be seen.