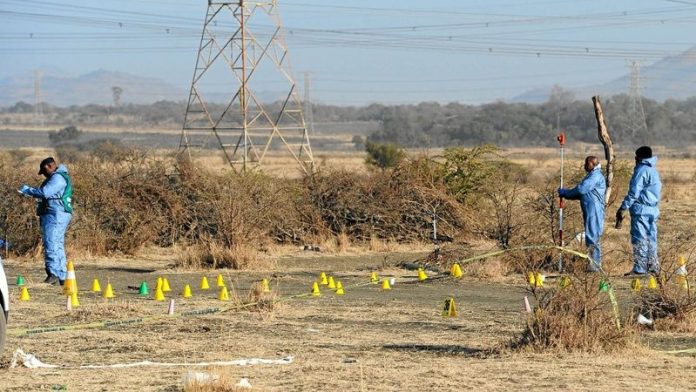 The senior officer was on the scene at Marikana on August 16, when police shot dead 34 miners and injured a further 78.

Chaskalson held that Naidoo was responsible for the deaths of at least 20 workers at the scene, who were in need of medical attention that they did not receive in time.

It emerged that the police did not administer emergency medical assistance to fallen miners at the so-called scene one, and Naidoo said that he did not know whether the police were investigating why this was not done.

Chaskalson said the police should be required to give first aid in situations like Marikana.

Naidoo said several other issues needed to be resolved, such as what would happen if the injured person died while an officer was administering first aid.

Police did not send medics to scene one because, according to Naidoo, it was not clear that people had been shot. Instead, Naidoo expected to find injuries consistent with a stampede.

Chaskalson said it was "utterly untenable" that the police had a policy that allowed an injured man to bleed to death when officers were on the scene.

Chaskalson also criticised Naidoo's handling of the crime scene, which was swept for weapons before it could be secured.

Chaskalson said this "irreparably" damaged the possibility of future prosecution stemming from the shootings. But Naidoo said his first priority was to ensure that no further lives were lost by confiscating weapons. Crime-scene photographers took over after the fact, he said.

Seriti
The arms deal commission, chaired by Judge Willie Seriti, continued to hear evidence into the R70-billion transaction this week.

The commission adjourned briefly last week in an attempt to resolve an ongoing dispute with arms deal critic Richard Young, who has requested documentation necessary to cross-examine an Armscor witness, Fritz Nortje.

Seriti said the commission had tried to accommodate Young's request for documentation pertaining to Nortje's evidence, but expressed concern at the time this was taking.

Nortje was due to testify four months ago. Seriti said, with nine months left for the commission to finish its work, he wondered how much longer it would have to accommodate Young.

The commission will proceed with other witnesses until Young appears on March 17. Young, evidence leaders, and legal teams met this week in an attempt to resolve the impasse.

Barry de Beer, a witness for Armscor, started giving evidence on Tuesday on the defence industrial participation packages, or DIPs, which form part of the offsets.

On Tuesday, De Beer said that the DIPs had largely been fulfilled, and a total of R4.7-billion had filtered down to the local defence industry.

But Armscor's 2011-2012 annual report cited various problems with the DIPs. These have not been put to De Beer, and it is unclear whether he will be cross-examined.

The Armscor report said: "The [Armscor] board is not satisfied with Armscor's management of the defence and industrial participation agreements. One company has to date failed to discharge its obligation, and others seemed to have chosen the areas and manner in which to discharge their obligations.

"It has become clear to the board that there was limited Armscor directed and purposeful action ­during the SDP [strategic defence package, or arms deal] leading to the discharge of DIP obligations.

"To date, Armscor cannot show the impact of DIP obligations on the economy.

"Meeting with affected ­companies has only served to confirm this concern."

Last year, the high court set aside the findings of the commission of inquiry into the arms deal scandal. Now activists are calling on the judicial conduct committee to investigate the judges in charge
Read more
National

Experts disagree on the meaning behind carrying sticks during strike action, a debate that will be aired at the CCMA on Wednesday
Read more
Analysis

‘Less lethal’ weapons have resulted in deaths and severe injuries, yet there are still no guidelines
Read more
Politics

Six years on, still no justice or closure for Marikana victims

As thousands of mining jobs are cut, families of striking workers slain in 2012 still await compensation and justice
Read more
Advertising
Continue to the category
Politics