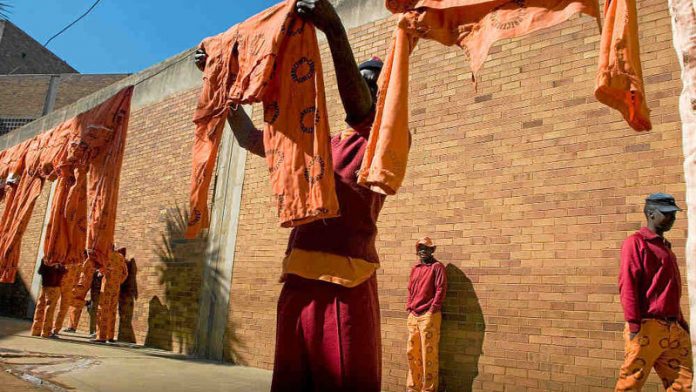 Victor Nkomo sits hunched on a chair behind a chipped and dirty glass partition. He presses the intercom button and his lips move, but there is no sound. The remand ­section of the notorious Johannesburg Medium A Prison is known for its faulty, dirty and ill-equipped ­visiting section.

Remand detainees, who await the outcome of their trial in the jail, better known as Sun City, are classified as noncontact inmates, a glass window with years' worth of accumulated grime and dirt separating them from their ­visitors.

Nkomo is the longest-term remand prisoner in the country. He has waited nearly eight years for the finalisation of his trial, in which he was charged with aiding an armed robbery at a Johannesburg casino where he was employed in 2006.

When the magistrate died in 2008, the trial had to start from scratch. Since then, it has been marred by serious delays. Since July 2012, the trial has run for only part of a day on three separate days. The investigating police officer still hasn’t testified, which means the trial actually has yet to start in earnest.

Nkomo, who is presumed innocent until proven guilty, was told by the prosecutor that the court case would most likely take another three years. “My lawyer and I are always present at court sessions,” says Nkomo, as the intercom is finally made to work. "But my co-accused and their lawyers often don't show, which leads to more delays.

"I am depressed and have lost faith. My wife divorced me and I haven't seen my now 16-year-old son grow into a young man."

Diminished contact with loved ones is not Nkomo's only worry. The abominable conditions at Sun City, which has an overcrowding rate of 175%, depress him as well.

Communal cell
Nkomo shares a communal cell built to house 20 inmates with 60 men. Gang violence and infectious diseases such as tuberculosis (TB) flourish in the dilapidated cells. But Nkomo's main concern is about his future.

"I have no access to a library, ­television or radio, and no way to better myself while I'm in the awaiting trial section of the prison."

Nkomo, who allegedly helped the robbers to find the vault containing money at Montecasino in 2006, still hasn't had a judge look at the incriminating evidence against him. He fears he will waste more productive years of his life behind bars, with no opportunity to prepare for the job market or society in general, as remand detainees are not offered any rehabilitation programmes.

When section 49G of the Correctional Services Act was introduced in July last year, Nkomo was hopeful that he would soon go on trial. The new law seemed tailor-made for him. It stipulates that a remand detainee may not be incarcerated for more than two years without seeing a judge or magistrate, who will have to decide if prolonged detention is constitutional. The fair administration of justice, and the possible risks to society if a suspect is released, are factors that determine the judge's decision.

Section 49G is aimed precisely at the harsh and prolonged conditions of remand detention that Nkomo has experienced and that add to South Africa's overburdened prison system.

But Nkomo's hopes were quickly dashed when magistrate Vincent Pienaar decided on December 23 last year to continue his incarceration. He barely responded to the 30-page legal memo by Nkomo's advocate, Adrian d'Oliviera, that outlined the reasons why Nkomo should be released, listing his many court appearances and postponements and providing statistics about the overcrowding at Sun City. Pienaar deemed the many postponements in the robbery trial acceptable, stating that Nkomo's release "was not in the interest of justice".

D'Oliviera and Peter Jordi, Nkomo's attorney at the Wits Law Clinic, have now applied for a stay in prosecution in the hope that this legal intervention will yield better results. The Johannesburg high court will assess the application on March 13.

Turned down
D'Oliveira previously tried to have Nkomo's case struck off the roll based on a provision in the Criminal Procedure Act that deals with unreasonable delays. But a judge also turned down this petition.

It seems that there has been no legal remedy for the longest awaiting trial detainee in the country.

Has the legal system failed a man who is presumed innocent, yet has spent eight years of his life in a potentially life-threatening prison?

Britta Rotmann, the head of the remand detention branch at the department for correctional services, says she is "reluctant to say that 49G is not working properly because Nkomo has not been released, as it is up to a judge to decide on individual cases. It is not the outcome I had hoped for Nkomo."

Rotmann says that the new ­provision has at least raised awareness about the length of detention among the judiciary and the prosecution service. Since May 2013, the number of remand inmates has shrunk by nearly 200. Of the 150 000 prisoners in South Africa, 44 829 await trial in remand detention centres. More than 2 000 have been waiting for the outcome of their trial for more than two years, and are eligible for a referral to a judge based on 49G.

"We cannot confirm that this decrease [of 200 inmates] was a direct result of the implementation of the new provision," said Rotmann. "I rather suspect it's caused by the better working of various departments in general."

Arrested
Former inmate David Mkhwanazi is one of the 200 released remand detainees who did not benefit from 49G.

In 2006, he ran to catch a train, yet never made it to the platform because the police grabbed and arrested him. They thought he was running away from the group arrest they were conducting for the murder of a factory owner in Westonaria.

Like Nkomo, Mkhwanazi had to sleep on the floor of the communal cell when he arrived at Sun City. Unlike Nkomo, Mkhwanazi contracted TB while in prison. When the judge presiding over the long-delayed murder trial got around to assessing the evidence against him, six years after his arrest, he was released immediately as there was no evidence against him.

Mkhwanazi has enlisted the help of a pro bono lawyer to sue for damages as the state does not automatically compensate detainees for wrongful incarceration.

The onus of South Africa's clogged-up and dysfunctional court system rests firmly on the shoulders of the accused. Bail is designed to move that onus from the suspect to the courts. Nkomo's bail application was turned down repeatedly, however, because the authorities claimed he was of Zimbabwean nationality and was in the country illegally. Recently, home affairs confirmed that Nkomo is indeed South African, which opens the door for a new bail application.

Nkomo, meanwhile, faces more trial delays. Recently the judge postponed his trial until March 18, after which it will continue on April 7.

Ruth Hopkins is a member of the Wits Justice Project, which is based in the journalism department of the University of the Witwatersrand