Warnings that sanctions will ‘boomerang’ as Ukraine standoff intensifies 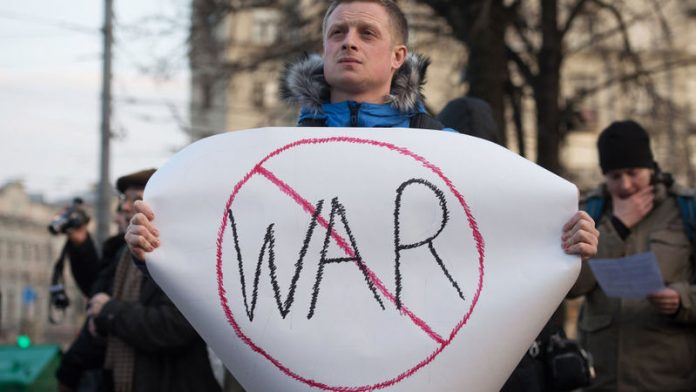 In a telephone conversation with US Secretary of State John Kerry, Foreign Minister Sergei Lavrov warned against "hasty and reckless steps" that could harm Russian-American relations, the foreign ministry said on Friday.

"Sanctions … would inevitably hit the United States like a boomerang," it added.

Kerry stressed the importance of resolving the situation through diplomacy and said he and Lavrov would continue to consult, the state department said.

It was the second tense, high-level exchange between the former Cold War foes in 24 hours over the pro-Russian takeover of Ukraine's Crimean peninsula.

Russian President Vladimir Putin said after an hour-long call with US President Barack Obama that their positions on the former Soviet republic were still far apart. Obama announced the first sanctions against Russia on Thursday.

Putin, who later opened the Paralympic Games in Sochi which have been boycotted by a string of Western dignitaries, said Ukraine's new, pro-Western authorities had acted illegitimately over the eastern, southeastern and Crimea regions.

"Russia cannot ignore calls for help and it acts accordingly, in full compliance with international law," he said.

Serhiy Astakhov, an aide to the Ukrainian border guards' commander, said 30 000 Russian soldiers were now in Crimea, compared with the 11 000 permanently based with the Russian Black Sea fleet in the port of Sevastopol before the crisis.

The Pentagon estimated as many as 20 000 Russian troops may be in Crimea.

Serious confrontation
On Friday evening armed men drove a truck into a Ukrainian missile defence post in Sevastopol, according to a Reuters reporter at the scene. But no shots were fired and Crimea's pro-Russian premier said later the standoff was over.

Putin denies the forces with no national insignia that are surrounding Ukrainian troops in their bases are under Moscow's command, although their vehicles have Russian military plates. The West has ridiculed his assertion.

The most serious East-West confrontation since the end of the Cold War escalated on Thursday when Crimea's parliament, dominated by ethnic Russians, voted to join Russia and set a referendum for March 16. The conflict resulted from the overthrow last month of President Viktor Yanukovich after protests in Kiev that led to violence.

Turkey scrambled jets after a Russian surveillance plane flew along its Black Sea coast and a US warship passed through Turkey's Bosphorus straits on its way to the Black Sea, although the US military said it was a routine deployment.

The head of Russia's upper house of parliament said after meeting visiting Crimean lawmakers on Friday that Crimea had a right to self-determination, and ruled out any risk of war between "the two brotherly nations".

European Union leaders and Obama said the referendum plan was illegitimate and would violate Ukraine's constitution. Obama called German Chancellor Angela Merkel from his Florida vacation on Friday to discuss the situation in Ukraine.

"The leaders reiterated their grave concern over Russia's clear violation of international law through its military intervention in Ukraine," the White House said in a statement.

Visa bans
Obama ordered visa bans and asset freezes on Thursday against so far unidentified people deemed responsible for threatening Ukraine's sovereignty. Earlier in the week, a Kremlin aide said Moscow might refuse to pay off any loans to US banks, the top four of which have around $24-billion in exposure to Russia.

Japan endorsed the Western position that the actions of Russia constitute "a threat to international peace and security," after Obama spoke to Prime Minister Shinzo Abe.

China, often a Russian ally in blocking Western moves in the UN Security Council, was more cautious, saying economic sanctions were not the best way to solve the crisis and avoiding comment on the Crimean referendum.

The EU, Russia's biggest economic partner and energy customer, adopted a three-stage plan to try to force a negotiated solution but stopped short of immediate sanctions.

The Russian foreign ministry responded angrily on Friday, calling the EU decision to freeze talks on visa-free travel and on a broad new pact governing Russia-EU ties "extremely unconstructive." It pledged to retaliate.

Brussels and Washington rushed to strengthen the new authorities in economically shattered Ukraine, announcing both political and financial assistance. The regional director of the International Monetary Fund said talks with Kiev on a loan agreement were going well and praised the new government's openness to economic reform and transparency.

The European Commission has said Ukraine could receive up to $15-billion in the next couple of years provided it reaches agreement with the IMF, which requires painful economic reforms such as ending gas subsidies.

Currency restrictions
Promises of billions of dollars in Western aid for the Kiev government, and the perception that Russian troops are not likely to go beyond Crimea into other parts of Ukraine, have helped reverse a rout in the local hryvnia currency.

In the past two days it has traded above 9.0 to the dollar for the first time since the Crimea crisis began last week. Local dealers said emergency currency restrictions imposed last week were also supporting the hryvnia.

Russian gas monopoly Gazprom said Ukraine had not paid its $440-million gas bill for February, bringing its arrears to $1.89-billion and hinted it could turn off the taps as it did in 2009, when a halt in Russian deliveries to Ukraine reduced supplies to Europe during a cold snap.

In Moscow, a huge crowd gathered near the Kremlin at a government-sanctioned rally and concert billed as being "in support of the Crimean people." Pop stars took to the stage and demonstrators held signs with slogans such as "Crimea is Russian land" and "We believe in Putin."

Ukrainian Prime Minister Arseny Yatseniuk said no one in the civilised world would recognise the result of the "so-called referendum" in Crimea.

He repeated Kiev's willingness to negotiate with Russia if Moscow pulls its additional troops out of Crimea and said he had requested a telephone call with Russian Prime Minister Dmitry Medvedev.

But Putin spokesperson Dmitry Peskov ridiculed calls for Russia to join an international "contact group" with Ukraine proposed by the West, saying they "make us smile."

International pressure
Demonstrators encamped in Kiev's central Independence Square to defend the revolution that ousted Yanukovich said they did not believe Crimea would be allowed to secede.

"I don't think the Russians will be allowed to take Crimea from us: you can't behave like that to an independent state. We have the support of the whole world. But I think we are losing time. While the Russians are preparing, we are just talking."

Unarmed military observers from the pan-European Organisation for Security and Cooperation in Europe were blocked from entering Crimea for a second day in a row on Friday, the OSCE said on Twitter.

The United Nations said it had sent its assistant secretary-general for human rights, Ivan Simonovic, to Kiev to conduct a preliminary humans rights assessment.

Ukrainian television has been replaced with Russian state channels in Crimea and the streets largely belong to people who support Moscow's rule, some of whom have harassed journalists and occasional pro-Kiev protesters.

Part of the Crimea's 2-million population opposes Moscow's rule, including members of the region's ethnic Russian majority. The last time Crimeans were asked, in 1991, they voted narrowly for independence along with the rest of Ukraine.

"With all these soldiers here, it is like we are living in a zoo," Tatyana (41) an ethnic Russian. "Everyone fully understands this is an occupation." – Reuters