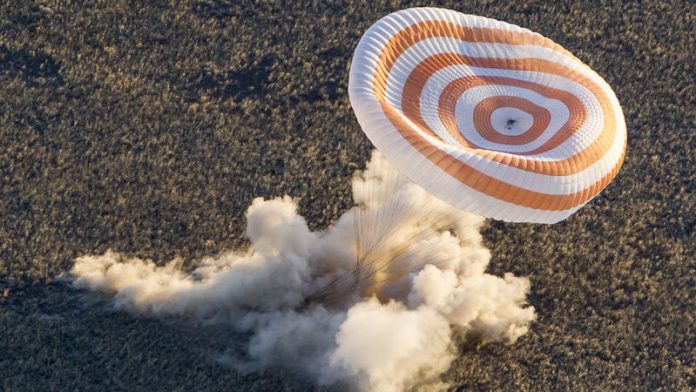 Three astronauts, an American and two Russians, who carried a Sochi Olympic torch into open space, landed safely and on time on Tuesday in Kazakhstan, defying bad weather and ending their 166-day mission aboard the International Space Station (ISS).

"We have landing!" read a huge TV screen at Russia's Mission Control outside Moscow as the descent capsule hit the frozen ground at 9.24am (3.24am GMT) south-east of the town of Zhezkazgan in central Kazakhstan.

"Safe arrival back on Earth," said a Nasa TV announcer while all-terrain rescue and recovery vehicles were shown trundling across a snowy steppe to the capsule. "The crew are reported to be in good health," Nasa said.

Inside the capsule were former ISS commander Oleg Kotov and flight engineers Sergei Ryazansky and Michael Hopkins from Nasa. The trio launched together into space on September 25.

In addition to working on 35 science experiments, Kotov and Ryazansky carried the Olympic torch for the 2014 Winter Olympic Games outside the station during a spacewalk on November 9.

Severe weather conditions
They left behind a small crew headed by Japan's Koichi Wakata, the first Japanese national to command the station. Three more crew members are due to arrive later this month.

Severe weather in Kazakhstan had threatened to delay the Soyuz's landing.

Before their undocking from the ISS, fog and low visibility had prevented airborne rescue and recovery teams from getting to Zhezkazgan, a town about 150km from the remote landing site on the windswept flatlands, a Russian space industry source said.

But Russian officials decided to go ahead with the landing after reviewing weather forecasts and the status of recovery crews.

"There's a lot of snow on the ground and temperatures are hovering in the single-digits [Fahrenheit]," said Nasa mission commentator Dan Huot.

Due to severe weather conditions, it was decided not to set up an inflatable tent for routine medical tests at the landing site. Instead, the crew would undergo just quick tests and be flown by helicopters straight to the local Kazakh town of Karaganda, where a formal welcome ceremony would be held.

Ukraine tensions
The US-Russian space partnership so far has not been affected by tensions over Ukraine. The countries lead the 15-nation space station programme.

The $100-billion research complex, which flies about 418km above Earth, has been permanently staffed by rotating crews of astronauts and cosmonauts since November 2000. – Reuters