Moves to oust Goldrich from Blyvoor 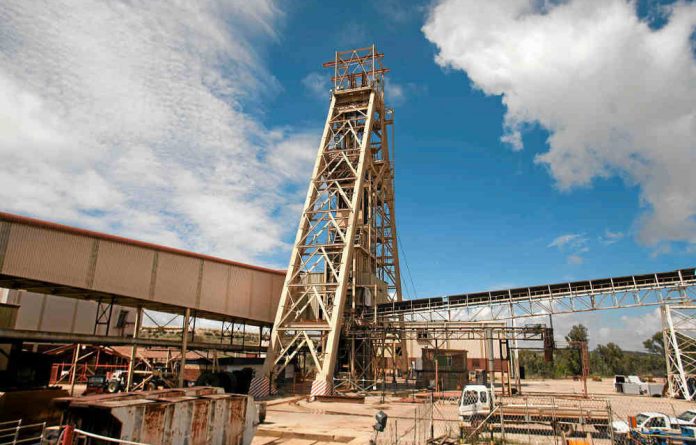 Wages aren’t being paid, deadly force has been used to kill illegal ­miners, investors are owed money, mine assets have been stripped and gold is being sold ­illegally.

These are among the damning and mounting allegations Goldrich Holdings is facing both inside and outside court.

Just three months since Goldrich signed an agreement with liquidators to buy the insolvent Blyvooruitzicht gold mine in Carletonville, the company is now facing its own possible liquidation as well as an ever-growing list of ­disgruntled creditors.

Last week, amaBhungane revealed that at least 20 people – perhaps more than 40 – had been killed in clashes between illegal miners and security staff employed by Goldrich.

Information obtained this week appears to confirm that two alleged “cable thieves” who were filmed by an amaBhungane source while being detained and beaten at Blyvoor are now dead.

AmaBunghane has obtained photographic evidence of two bodies that appear to be the same victims, and will be following up on this lead.

Goldrich has denied ordering any killings.

At the helm of Goldrich are Fazel Bhana and Thulani Ngubane. Both were involved with Aurora Empowerment Systems and its disastrous handling of two mines that belonged to the insolvent Pamodzi Gold mining company, in 2010.

And the Blyvoor storyline, under Goldrich, is starting to read like a remorseless replay of the tale of the Pamodzi mines, under Aurora, which collapsed amid broken investment promises and allegations of asset-stripping.

Ngubane is Goldrich’s chairperson and, although Bhana’s involvement has not been clarified, he is involved in the day-to-day running of the mine and is understood to be a shareholder.

Bonginkosi Mthethwa, Goldrich’s only listed director, who has put his name to various opposing affidavits filed in court since the beginning of the month, appears to be little more than a figurehead.

Blyvoor’s liquidators have filed two urgent applications with the Johannesburg high court. The first, launched on February 28, is a two-pronged application in which it seeks to nullify its sale agreement with Goldrich and asks for an order to evict Goldrich from the mine’s ­premises. The second, which Blyvoor’s liquidators won on March 5, was for a court order interdicting Goldrich from removing and selling any assets from the mine.

Liquidators losing patience
Affidavits by lead liquidator Leigh Roering tell a tale of lapsed agreements, somehow repeatedly revived, and short or late payments, with Goldrich feeding the liquidators just enough cash to keep the deal alive and retain occupation of the mine.

Eventually the liquidators lost patience, leading to the application to evict Goldrich.

Meanwhile, Roering alleges, the asset-stripping has accelerated and the company’s mismanagement poses a threat to surrounding mines and communities owing to the disrupted pumping of toxic water.

In his interdict application, Roering states: “It was brought to my attention during the course of the evening of February 28 2014 that assets of Blyvoor were being stripped and carted off the Blyvoor property.”

He said the tip-off came from “sources who were unwilling to depose to affidavits for fear of their own safety”.

Roering said that, the next day, a representative of AngloGold Ashanti (AGA) informed him that Goldrich “was flame cutting AGA’s assets which were on the Blyvoor property”, notably a winch shaft “worth millions” that had already been sold by the liquidators to AGA.

“Also, on March 1 2014, I was advised, again by a source who will not sign an affidavit for fear of his own safety, that three borer mills belonging to Blyvoor, which are functional pieces of equipment and not redundant, were being cut up into scrap metal.”

Roering said an urgent email was sent to Goldrich noting the prejudicial activity on the mine and warning: “It is apparent from [Goldrich’s] conduct that it holds the entire judicial process in contempt and that it is attempting to realise as much cash as possible before being evicted from the mine … The respondent’s ­conduct is reprehensible.”

Asset stripping
​Roering states that because none of the employees at the mine were prepared to depose to an affidavit confirming the conduct of the respondent, he went out to the Blyvoor property on March 3 2014 to investigate.

“I can confirm … three of the borer mills are being dismantled and being loaded on to a truck. It is evident that the activity being conducted is not by illegal miners [zama zamas] and that the respondent is in the process of stripping the assets at the Blyvoor property with total disregard.

“There is a real fear that the assets of Blyvoor, including the gold concentrate and even gold nuggets, will be illegally removed and sold. In this regard, I have been advised that the respondent is panning gold dust, producing gold and transporting it to refineries … which heightens the concern that the material assets of Blyvoor are disappearing without any accounting to the liquidators.”

These activities, Roering alleges, are in contravention of the agreements with Goldrich, which the ­liquidators are trying to cancel.

States Roering: “The individuals associated with [Goldrich] were involved in the Pamodzi liquidation and were responsible for asset-stripping through Aurora, and the liquidators want to avoid a recurrence of what transpired on that estate.”

Elsewhere, Roering alleges: “I was contacted on the morning of February 28 2014 by the West Rand organised crime unit, which advised me that an inquiry had been opened to investigate the illegal refining and sale of gold out of the Blyvoor property. In the circumstances, [we] doubt the bona fides of [Goldrich] … in general.” On March 10, two of Blyvoor’s senior managers appeared in the Carletonville magistrate’s court after they were arrested by the Hawks on charges of theft and the illegal possession of gold.

Arrests and delaying tactics
Refinery plant manager Sarel Barkhuizen and Blyvoor’s mine manager Ettiene Erasmus appeared together. Barkhuizen was granted bail of R50 000 and Erasmus, who faces two extra charges for fraud and defeating the ends of justice, will have a formal bail application hearing next week.

Erasmus initially went by the name Wynand Nortje, but it has emerged that this is not his true identity.

Meanwhile, on February 27, Goldrich itself applied for “business rescue”, which would usually lead to the appointment of a business rescue practitioner to take over the running of the company.

But Roering claims that this is ­simply a delaying tactic.

In a supplementary affidavit, he told the court: “I submit that this is a clear ploy by [Goldrich] and its director to frustrate proceedings against [them] so as to enable the respondent to remain in possession of the Blyvoor property and continue ­stripping the mine.”

In his answering affidavit, Goldrich director Mthethwa rejected all Roering’s allegations, arguing that the liquidators were attempting to “harass” Goldrich and “generate aspersions to create an atmosphere of suspicion against [Goldrich] by way of speculative allegations”.

Prior to the business rescue, Goldrich indicated that Tayfin had been employed to conduct a ­forensic audit on Blyvoor’s assets.

Meanwhile, court papers have revealed that one of Goldrich’s alleged creditors is a company called Euro Logistics. Euro Logistics has been mentioned to amaBhungane previously by sources working at Blyvoor as one of the companies “removing assets” from the mine for Goldrich as scrap.

At the time these claims were made, Yaseen Suliman, Euro Logistics’s owner, denied that his company had any contract with Goldrich with regard to the removal of scrap metal.

He also denied that he had “a personal relationship” with Fazel Bhana’s father, Solly Bhana, saying only: “We have mutual interest in a common company.”

Suliman and Solly Bhana are listed together as directors of several companies.

Yet it appears that Euro Logistics does have a very real interest in the company. On March 5, it jumped into the legal tussle between Goldrich and the liquidators and filed its own urgent application as the “intervening creditor” in Blyvoor’s application to interdict the company from selling assets.

In his affidavit, Suliman claims that his company “loaned” Goldrich R6-million, although he does not detail the terms of these loans and advances, nor his apparent links to the Bhanas.

Goldrich has mounted a determined effort to rebut the liquidators’ allegations and retain possession of Blyvoor.

In court on Thursday, the company argued that the liquidators had in effect revived their agreement by accepting a late payment from Goldrich.

In his answering affidavit, Gold­rich director Bonginkosi Mthethwa hit out at the liquidators’ application to void the agreement and evict Goldrich, saying the matter was neither urgent nor appropriate, given that Goldrich had applied for business rescue.

“On the contrary, this application is calculated merely to harass [Goldrich], mindful of the fact that the [liquidators] have already made themselves guilty of spoliation.”

He is referring to a previous unsuccessful attempt by the liquidators to evict Goldrich.

Mthethwa flatly denied that any “functional equipment” was cut up to be sold as scrap, but he did not refer to specific allegations

or deny that material is being removed.

“The scrapping of redundant material is part of the normal course of business on the mine … The allegations of reprehensible behaviour on the part of [Goldrich] … are contemptible and unwarranted,” he said. “They did not merit any response.”

Mthethwa said Goldrich was entitled to proceed as it did: “The material cut up was so patently and undeniably redundant that [the liquidators’] disinclination to confirm same was nothing short of obstructionist.”

The liquidators’ allegations regarding the theft or disappearance of gold nuggets and concentrate was “scurrilous”, he said. “Absolutely no case is made out justifying any interdict in this regard. The same applies to gold dust.”

Mthethwa questioned the liquidator’s motives, stating: “The unseemly references to the West Rand Organised Crime Unit and to some unspecified individuals allegedly associated with [Goldrich] whose seemingly nefarious but unspecified activities regarding the so-called Pamodzi liquidations and evidently asset stripping in another unrelated, previous liquidation, simply demonstrate the lengths to which [the liquidators] are prepared to go to … create an atmosphere of suspicion.” The case will be resumed on March 18. – amaBhungane reporter

SAA crash-lands but new airline will take off

During discussions between unions and business rescue practitioners and the government, it was decided that the national carrier would be closed and a new airline formed
Read more
Business

Automation is unstoppable, but if we're strategic about its implementation, it presents major opportunities
Read more
National