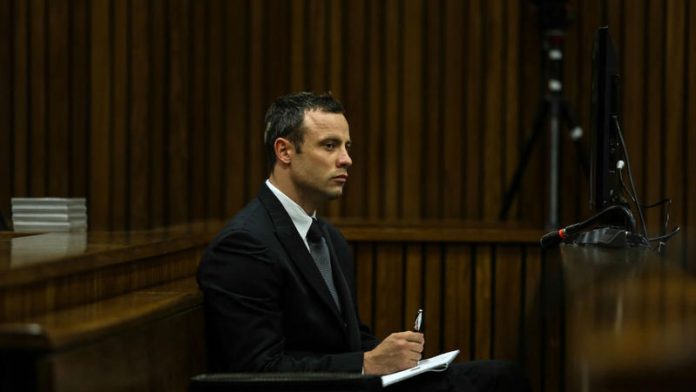 Oscar Pistorius's lawyer seized on a state forensic analyst's apparent omissions in collecting evidence for the Olympian and Paralympian's murder trial in the high court in Pretoria.

Barry Roux, SC, wanted to know on Thursday why Colonel Johannes Vermeulen had not analysed a prosthetic foot of the double amputee, which was handed in as evidence.

The significance of the prosthetic foot and door became evident on Wednesday when Vermeulen was asked to testify on the cricket bat Pistorius said he used to break the toilet door down, after he shot his girlfriend Reeva Steenkamp on February 14 2013.

Vermeulen had said that in his opinion Pistorius was on his stumps when he bashed the cricket bat into the door, based on height measurements of marks on the door, even though he had left this out of his report.

Pistorius said at his bail hearing that he was on his stumps when he fired four shots into the door, then when he realised it was Steenkamp, he put his "legs" on and struck at the door with a cricket bat.

Roux also wanted to know why Vermeulen had not analysed a section of the door, which had a mark which could corroborate Pistorius's version that he had his prosthetic legs on and kicked the door down to free Steenkamp.

Analysing the cricket bat
Roux also wanted to know why Vermeulen only examined the shin of the prosthetic leg, and not the foot.

"I was not requested to do analysis on the prosthetic foot, except for that mark that was on the shin," said Vermeulen.

The forensic analyst reiterated Wednesday's testimony that he had only been asked to focus on analysing the cricket bat and the strike marks from the bat on the door.

He denied reading the contents of Pistorius's bail application, saying he had only seen a part of it when he walked past it when it was open on the desk.

He repeated his opinion that it was possible that the mark on the door, which looks like a shoe print, could be from a kick, but unless analysis was done there was no certainty. Pistorius could also have stood on a broken piece of door later.

He said that although Vermeulen claimed to work for both the accused and the state, he had already said he did "not bother" to check for anything unrelated to the cricket bat.

"I ignored those that I could immediately link with the cricket bat because I know there were various other investigations going on and different issues with the door," he said.

The door and the replica of the cubicle, complete with a toilet, cistern, and magazine rack, was set up next to the witness box in the court. Four bullet holes are clustered on the right side of the door, just under the keyhole. The toilet is to the left of the door.

Pistorius has been charged with the murder of Steenkamp in his home in Silver Woods estate, Pretoria, as well as charges under the Firearms Act relating to the alleged discharge of a firearm at Tasha's restaurant, Johannesburg, and out the sunroof of a car driving back from the Vaal River.

He has pleaded not guilty to all charges.

The right leg had blood streaks on it, and one of the grey ankle socks had a dark blood stain near the toes.

While the photographs of the double amputee's artificial legs were being sought, and as an official was scrolling through the photo files, a picture of Steenkamp, covered in blood and lying on the floor was seen on screens placed around the court.

Vermeulen said he had received the legs without the socks.

"It would have been fantastic as a qualified foot print examiner seeing that mark … to just do the test," said Roux.

Pistorius has admitted that he fired four shots into a toilet cubicle at his home thinking there was an intruder, while he was on his stumps. – Sapa