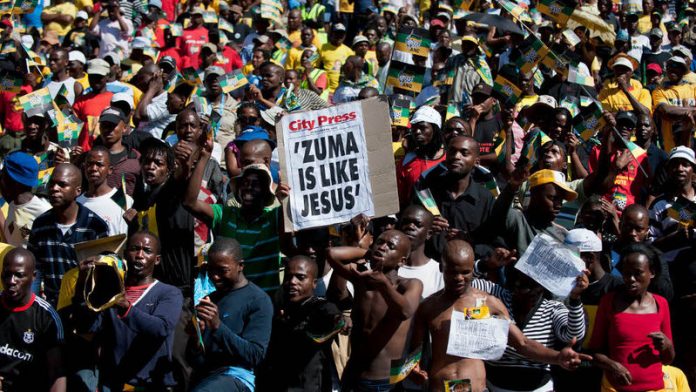 Empires throughout history have set impressive time periods for their planned longevity, and the ANC has gone biblical with its own forecast, saying that it will rule until Jesus comes back. This is part of a semantic shift in the way the party talks about itself and those who oppose it.

"Even God expects us to rule this country because we are the only organisation which was blessed by pastors when it was formed," said President Jacob Zuma at a rally in January. "This is why we will rule until Jesus comes back."

Previously, he said that by voting for the party, people would secure their place in heaven.

Last week Sports Minister Fikile Mbalula said those who oppose his party or its leader are forces for evil. In this case, it was football fans at the FNB Stadium who had booed Zuma following Bafana Bafana's 5-0 drubbing by Brazil.

Evil plans
An agitated Mbalula, speaking the next day, said: "All of their plans, infused by Satanism at best, will never succeed in the future because their plans are nothing else but filled with evil."

This type of language has started appearing in communiqués from the ANC, a party that once prided itself on being secular. In a response to the alleged racism at the North-West University campus in Potchefstroom, the party this week sent out an email titled "Racism is Satanism".

Last year, Nono Maloyi, the MEC for human settlements and public safety in North West, blamed the devil for violence in the province. "Satanism is the only wicked force that leads wives to kill their husbands and their children, and for men to rape their own children."

Angie Motshekga, minister of basic education, asked for prayers for matric students in Mpumalanga last year. "We believe nothing can defeat prayer," she said.

"We will make sure that the kids are delivered from evil spirits and believe we will get the best results this year."

Thanks be to God
Mcebisi Skwatsha, a member of the ANC's national executive committee, told delegates at a list conference in the Northern Cape last year that, thanks to God, the party would win the elections: "We will not fear any weapons formed against us ahead of the 2014 general elections because God is with us."

At the same conference, Sindiso Mfenya, a provincial ANC member, went further and said former leader OR Tambo had told him that "the ANC had its own God" – that was why those who attack the party would be destroyed.

Piet Naudé, professor of ethics at the Nelson Mandela University, said politicians using God to gain political credibility was as old as humanity itself.

"We should not be surprised or even shocked when ANC leaders resort to Christian imagery to promote their cause."

But people should be wary of this kind of association, he said. "As a rule of thumb, one should rarely trust a politicians using God for election purposes. It is a transgression of the second commandment."

National Party flavour
The language and iconography used is not unlike that of the Nat­ional Party. Apartheid was the will of God – a narrative reinforced by the Dutch Reformed Church. Afrikaners were chosen by God to bring light to what was they saw as the "dark continent".

When the apartheid regime came under pressure, the association was cranked up. In its darkest hours of the 1980s, the apartheid government used its favourite bogeyman, the communist rooi gevaar (red danger), as the embodiment of the devil.

The ultimate expression of evil became a pervasive image in white culture, said Nicky Falkof. A lecturer at the University of the Witwatersrand, she has written extensively about South Africa's "satanic panic" and the race element that underpins it.

"The belief in satanic conspiracy maintained apartheid's work of racial separation and kept black and white youth in their place," she said. The devil was seen as a "legitimate and real threat to white South Africa", she said.

The fearmongering also led to the foundation of the police's occult crimes unit. Its founder, Kobus Jonker, gained a fearful reputation. Known as "Donker Jonker", he is a hard man to track down these days but, in a 2010 interview with the American magazine Vice, he said the devil was often used as an easy excuse by people.

But, he said, he had encountered many cases of "people being possessed" by the devil. He gave an example of a "girl who had ants crawling out of her breasts".

The police say there has been a steady increase in the number of crimes related to satanic rituals in recent times.

But South African courts try people according to the crimes committed and do not accept evidence based on the supernatural: claiming that your opponents are possessed by a satanic force holds no sway, except in the court of public or political opinion.