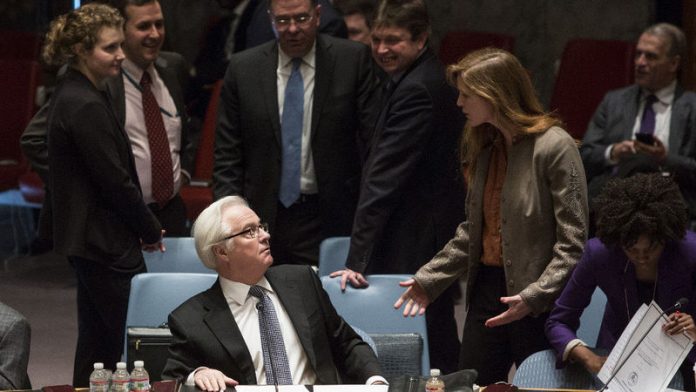 Russia on Saturday vetoed a UN Security Council draft resolution that declared a planned referendum on the status of Ukraine's Crimea region "can have no validity" and urged nations and international organisations not to recognise it.

The Russian veto of the draft, drawn up by the United States, was expected. Moscow, which has sent military forces to Crimea, is backing Sunday's referendum, which would transfer control of the region from Ukraine to Russia.

"This is a sad and remarkable moment," Samantha Power, the American ambassador to the United Nations, said after the vote by the 15-member Security Council.

Thirteen countries voted in favour, Russia against and China abstained. Russia and China are among the Security Council's five permanent, veto-holding members.

"This annexation … goes beyond Ukraine, it concerns us all," Gerard Araud, France's UN ambassador, said in a statement. "This veto must be seen as a defeat only for Russia."

The brief resolution noted that the referendum was not backed by the Ukrainian government in Kiev.

Russia's ambassador to the United Nations, Vitaly Churkin, said before the council met, "No surprises at this vote."

Later, the Russian Foreign Ministry condemned the draft resolution as another US attempt to interfere in Ukraine.

"Unfortunately neither the stability of that country [Ukraine], nor its security nor the flourishing of its citizens concerns Washington," the ministry statement said.

Sunday's vote, dismissed by Kiev as illegal, has triggered the worst East-West crisis since the Cold War, and ratcheted up tensions not only in Crimea but also eastern Ukraine, where two people were killed in clashes late on Friday.

Russia, which has close historical ties to Ukraine and especially to Crimea, began seizing the region after the February 22 ouster of Ukrainian President Viktor Yanukovich.

China has voiced support for Ukraine's sovereignty and territorial integrity during Security Council sessions on the crisis, although diplomats said earlier they were not sure Beijing would break from Russia on Ukraine and further isolate Russia.

"The vote on the draft resolution by the Security Council at this juncture will only result in confrontation and further complicate the situation, which is not in conformity with the common interest of both the people of Ukraine and those of the international community," Xinhua news agency quoted Liu as saying.

"International financial institutions should start to explore how to help maintain economic and financial stability in Ukraine", he added, although China has so far shown little interest in helping the country with financial aid.

US ambassador Power said Russia stood alone and was wrong.