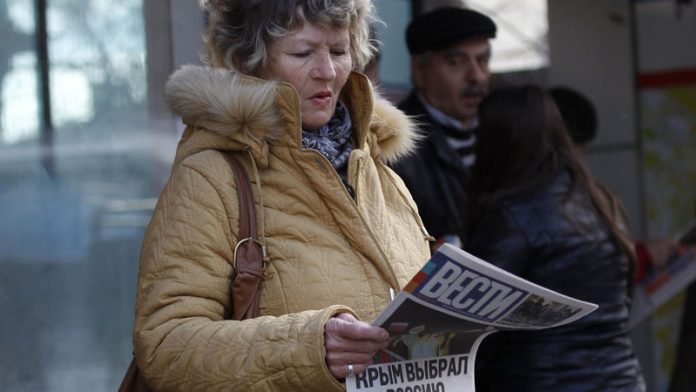 A complete, preliminary ballot count showed that 96.77% of voters in Ukraine's Crimea region voted to join Russia, the chairperson of the regional government commission overseeing the referendum said on Monday.

Earlier, Russia's deputy economy minister warned that the country's economy is in crisis.

Speaking at a local business conference, Deputy Economy Minister Sergei Belyakov said there are "clear signs" of the Russian economy being in crisis.

Analysts say that the economy is set to suffer from the continued weakness of the rouble and the fall-out from President Vladimir Putin's stand-off with the West over Ukraine .

The central bank, which revised its gross domestic product growth forecast down in February, estimates that the economy will expand by 1.5% to 1.8% this year.

"We will agree today, I'm confident, at the EU foreign ministers meeting, some sanctions, some travel bans, some asset freezes concerning individuals in Russia," Hague told the BBC in an interview.

"We will set out after this meeting the individuals concerned. The meeting has to go over this list. It could be amended yet," he said.

When asked whether the crisis signalled a new Cold War, Hague said: "I wouldn't describe it as a new Cold War but of course this will depend on the course of events over the coming days." – Reuters

Mabuza says he was hospitalised in Russia at his own cost