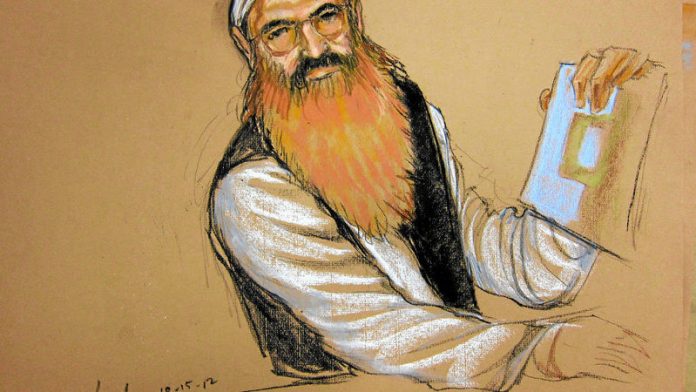 Al-Qaeda is in "a war of attrition" with the United States, according to the accused mastermind of the 9/11 attacks, Khalid Sheikh Mohammed, in one of the only statements he has issued since he was captured in 2003 and tortured.

During an interview with US defence attorneys, acting for Suleiman Abu Ghaith, Osama bin Laden's son-in-law, and which was filed in the New York federal court where Abu Ghaith faces conspiracy charges, Mohammed mused at length on the ideology behind the 2001 terrorist attacks that changed the course of US foreign policy.

Throughout the interview, which was facilitated by the US military command at Guantánamo Bay where the man known internationally as "KSM" has been detained since 2006, Mohammed portrayed al-Qaeda as a scrappy underdog compelled to assault a vastly more powerful US and thwart what he sees as the mastermind of global iniquity, hypocrisy and godlessness.

"The enemy occupier of the Islamic world is a superpower with a budget of billions while we are a small organisation whose members are limited in numbers and capabilities. There is no comparison between the two sides, so it is obvious that we would have to resort to a long war of attrition to which the military and media alike contribute," Mohammed said during the interview conducted in February this year.

Recently the court granted Abu Ghaith’s lawyers the right to ask Mohammed preliminary questions before any testimony was led, ultimately to rebut the state’s charges that Abu Ghaith conspired to kill Americans. He pleaded not guilty earlier this month.

Mohammed told the defence attorneys that Abu Ghaith "did not play any military role" in al-Qaeda and probably did not swear an oath to Bin Laden. Significantly for Abu Ghaith's case, Mohammed denied that Abu Ghaith played any role in a botched 2001 plot to smuggle bombs on to planes inside shoes.

It is Mohammed's most extensive public statement since his 2008 comments at a subsequently abandoned military commission at Guantánamo, which he termed an "inquisition" before stating a desire to plead guilty to the 9/11 attacks.

Mohammed said the primary operational goal of al-Qaeda was to provoke the US into futile, expensive and bloody wars, thereby advancing a strategic aim of forcing US and Western withdrawal from Islamic lands.

"Every state of emergency declared and every change of alert level that inflicts specific procedures on the military and civilian sectors costs the country millions of dollars. It is enough that the US government has incurred losses upwards of a trillion dollars in the wars it has waged in the aftermath of 9/11, the bleeding of which continues to this day," Mohammed said.

He did not speak about the brutal treatment he received from CIA interrogators after he was captured in Rawalpindi, Pakistan, in March 2003. He was subjected to 183 bouts of simulated drowning, known as waterboarding, in a single month. The closest he came to referring to his torture was to state that he suspected Abu Ghaith's attorneys were collaborating with the US government, as the questions he received "correspond precisely with the way the CIA and FBI posed questions".

There is a reference in a 2007 transcript from Guantánamo, also entered into the New York court record, to Mohammed's "treatment", but it is without elaboration. In the transcript, Mohammed said he "was responsible for the 9/11 operation, from A to Z", and confessed, with varying degrees of credibility, to responsibility for 31 acts or attempted acts of terrorism.

In the interview, he expanded on the arguments he made at Guantánamo in 2007: that the accusations the US has made to justify his detention at Guantánamo are flimsy, and that the US is the hypocritical puppet master of what amounts to a global besiegement of Muslims.

"Some visitors of every type met members of the government of the Islamic Emirate of Afghanistan and some even visited the mujahideen camps if they were trustworthy from a security point of view. That does not mean that anyone who visited a mujahideen camp or gave a lecture was a member of the group or agreed with their ideology," Mohammed told Abu Ghaith's lawyers.

Mohammed portrayed the US as rapaciously hypocritical, funding extremist Islamic organisations during the 1980s as proxies against the Soviet invasion of Afghanistan.

"At the time, jihadist speeches were accepted and even supported and applauded by the West because they mirrored their strategic interests," he said. But after Islamist uprisings began in Bosnia and Chechnya in the 1990s, "the term changed from ‘mujahid' to ‘terrorist', and from ‘jihad' to ‘terrorism' ".

Mohammed portrayed Afghanis­tan under Taliban rule – a time of impoverishment, global isolation and widespread human-rights abuses – as a golden age, its people spared "pillaging, looting, killing, rape and gang violence". Mohammed claimed that Kandahar, Kabul and Jalalabad under the Taliban were "even more secure than American cities such as Chicago, New York, Dallas and Los Angeles".

He presented the growth of al-Qaeda in Afghanistan as the result of US neglect of post-Soviet Afghanistan – "stupid foreign policy … completely blind to what was happening in the camps".

He claimed that Washington worked with Pakistani intelligence in the 1990s to keep Afghanistan weak.

"All of that was done to ensure that, even if the mujahideen prevailed and expelled the Russians, they would be left powerless and Afghanistan would remain dependent on Pakistan, India, Iran or Tajikistan, just as the West desired," Mohammed said.