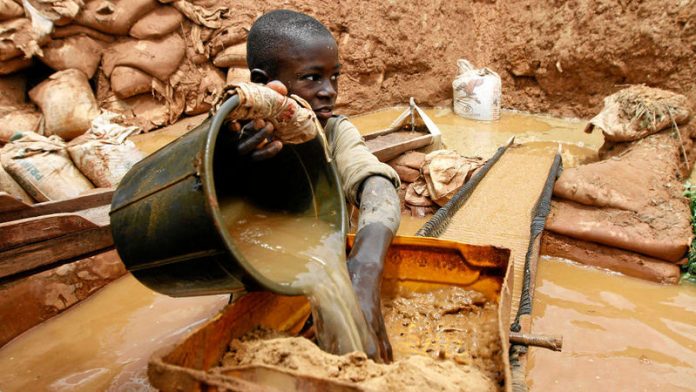 Flanked by fields of millet and groundnut, the northern Nigerian outpost of Bagega is so far out on the periphery of the global economy that when the financial crisis struck in 2008 few residents had any idea it was happening. And no one in a village without cars, electricity or tarred roads imagined it would end up indirectly poisoning hundreds of their children.

"We knew there was gold around here, but most people didn’t care. We have always been farmers here," said Alhaji Jibril, the white-haired village chief, sitting among the gnarled roots of a tree in front of his house, which he calls his office.

But when Western financial markets went into meltdown, gold provided investors with a haven from the turmoil, sending its price rocketing. For the first time, it became profitable to mine the ore from the lead-filled mines on which the village sits. "We thought it [the gold boom] was a good thing at first," said Jibril. So did thousands of itinerant fortune seekers, who beat down the dust trail leading to the village, swelling its population.

Shortly afterwards, officials from Médecins Sans Frontières (MSF) received a phone call from local health workers. "They told us their children were dying, and they didn’t know why," said Michelle Chouinard, the medical charity’s country director. It was, in fact, the beginning of what Human Rights Watch called the worst incident of lead poisoning in modern history. When gold is extracted it releases the lead, which accumulates in the blood and can severely damage the nervous system.

Ravaged
By the time the rush subsided, Bagega, and seven other villages dotting the Zamfara countryside, had been ravaged by the deadliest lead poisoning epidemic in modern history. At least 460 children died and nearly 2 000 were poisoned. "Lead poisoning can make adults infertile, but its most severe impact is on children. So we were seeing children who have been blinded or paralysed. Some have neurological damage, and that is not usually reversible," Chouinard said.

After three years of official dithering, some of the $5.4-million pledged in government funds released last year allowed international organisations to begin cleaning the worst of the contaminated areas. Yet, with few alternatives, thousands continue to mine in perilous conditions.

For the three extended families that live in Soweba’s compound, mining provided a much-needed boost when their farms suffered from erratic rainfall, partly linked to climate change. Three years ago, her 14-year-old son began bringing rocks home. Soweba and the other women would sift through them, looking for glints of gold dust. A gram could bring in up to 7 500 naira ($45) in a state where 70% lived on less than $2 a day.

Then, one by one, the children in the compound were struck by convulsions and sweats. "There was a herbal concoction which we used, but it didn’t work," said Soweba, a slight woman with almond-shaped eyes. Her two-year-old toddler died first. A few weeks later, another daughter died. Even cattle – drinking from contaminated waterholes – began to die, further diminishing the family’s earnings.

"We thought it was a genie, an evil spirit," she said, cradling a surviving daughter during a weekly visit to a clinic run by MSF. Still, her husband continued to allow their son to go mining against her wishes. "He says it is the only way to feed the surviving children. They just leave their [contaminated] clothes outside the house when they come back."

Crime
Health workers also worry about a potential crime boom. Lead poisoning is linked not only with learning difficulties, but also with violent crime.

Environmental scientist Simba Tirima, whose company shipped in about 10 000m3 cubic metres of soil in an effort to clean hundreds of compounds in Bagega, discovered astonishing rates of contamination: up to 35 000 parts per million of lead, almost 100 times the amount considered safe for residential soil. In the vast tracts of land where processing took place, the rates soared to 100 000 parts per million.

"It is my sincere hope that the communities will not be recontaminated. The key to preventing this from happening again lies in carefully designed safer mining programmes that are pragmatic and relevant," Tirima said.

Once a significant part of the economy, mining was abandoned by the government when oil was discovered in the 1960s, leaving the work to small-time diggers equipped with nothing but shovels and hand-powered stone crushers. The unregulated industry continues unabated. Villagers who make 10 times more money mining than from farming have told Tirima they would rather die of lead poisoning than poverty.

"They are not going to stop. I saw a woman who had lost eight kids, but she is still mining," said mines minister Musa Sada, who aims to increase the sector’s contribution to the economy to 5% from its current 1% by next year. "The only way around it is to invest in getting better methods for mining, provide modern equipment and get a more structured industry for these people to work in."

Yellow fever: The lack of modern and safe mining equipment at the gold mine in Bagega village has led to serious health problems in the community. (Reuters)

Poverty
For now, that has not happened. A short ride away from Soweba’s home, a fine mist of dust rises from the ground, clinging to clothes and machines and clogging the eyes, nose and mouth. Payment increases according to how hazardous the work is. At the top of the chain are workers who operate hand-powered grinders. Sitting amid fumes for hours a day, they earn up to 2 000 naira ($12) per jute bag of powdered stone. Next come those who mix poisonous mercury, used to separate the lead from its ore, with their bare hands.

"The early days were good days," said Adamu Tsiko, chairperson of the Bagega Gold Miners Association, surveying workers raising plumes of dust at a vast open-pit site. "Everybody wanted to join – some people walked from [neighbouring countries such as] Burkina Faso, Chad, Niger, even Côte d’Ivoire."

Tsiko was part of a delegation that met government representatives in the Nigerian capital of Abuja last year to lobby for modern equipment. He worries the government’s efforts to woo big players – using tax holidays and duty waivers – means artisanal miners are being forgotten.

"Right now we still need the correct equipment, we need [pipe-borne] water to do things properly. Like now, there’s nowhere to wash my hands before I start eating this sugar cane," he said, breaking off a piece for a blank-eyed toddler wandering through the clouds of fumes. – © Guardian News & Media 2014