Russia’s back: Whip of the West lets rip 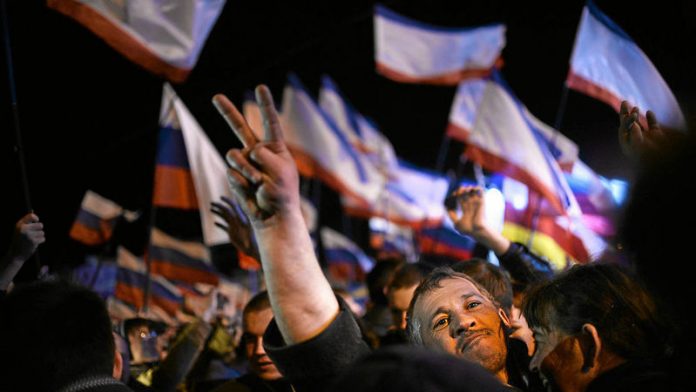 Vladimir Putin likes to take his kit off in public. But the exhibition of naked power by Russia’s president at a joint parliamentary session in Moscow this week was delivered fully clothed before a conservatively suited audience of officials and adoring, applauding fans dressed up as MPs.

Speaking at a white rostrum, a dapper-looking Putin’s message was clear: after years of being cheated and dissed by the Western powers, Russia is back. The United States and friends could like it or lump it. But as the Ukraine crisis showed, Russia would no longer take it lying down.

Putin spoke primarily about Crimea, whose cause was "sacred" and whose return to the Russian fold was justified, democratic and legal. But his broader theme was that Russia was finally standing up for its rights nearly a quarter of a century after the Soviet collapse.

Russia was fully aware of the possible negative consequences in its relations with the West of Crimea’s annexation, he said. But in handing over the region to Ukraine in 1954 like "a sack of potatoes", Nikita Khrushchev had erred, and now that wrong was being righted.

He also pledged support for a strong, prosperous Ukraine, claiming Russia was not planning to rescue ethnic Russian minorities in "other regions after Crimea … we don’t need that". This may come as a relief to politicians and pundits proclaiming a new cold war – if they believe him, that is.

Insults
At the same time, Putin directed some trademark insults at the new government in Kiev, whose leaders he said had seized power in a coup last month using "terror, violence and pogroms". These people were neo-Nazis, nationalists, anti-Semites and anti-Russians whose antecedents could be traced back to Adolf Hitler. "There is no one to negotiate with [in Kiev]. I’m not kidding." Following this undemocratic putsch, Russia could not possibly have left Crimea "in the lurch". To do so would have been treachery.

And anyway, he said, Crimeans had a right to self-determination, just like the people of Kosovo or any other aspiring independent nation. He did not mention Scotland. Luckily for Alex Salmond, there are not many distressed ethnic Russians on the Upper Clyde.

Putin is no orator. His delivery is wooden. His expression rarely changes. A smile seems like a concession. Even when his words grow angry and accusatory, his face remains impassive. This surface lack of feeling, concealing deep resentments, has a chilling effect.

Although his address to the Duma covered a wide range of issues including relations with the US and Germany, it was in large part a 50-minute whinge, a disappointed man’s whine about life’s unfairness and a historical determinism that boomeranged on its most devout adherents.

Putin is a master of the politics of grievance. The sudden collapse of the Soviet Union meant that "millions" of Russians had gone to bed in one country and woken up in another. The Russian motherland –the rodina – had been divided, then preyed upon by its enemies.

Separation
It was "inconceivable" that Russia and Ukraine should have been separated, he said, but that is what had happened. The ill-fated Commonwealth of Independent States was supposed to hold the former Soviet lands together, but it had been betrayed.

The Western powers led by the US had wilfully destroyed the power balance of the bipolar world. "The West believed it was entrusted by God to decide the fate of other peoples," he complained. They used pressure and coalitions to get what they wanted, and if they did not, they ignored the United Nations Security Council and used military force.

This is what had happened in 1999, when Belgrade, capital of Russia’s ally Serbia, was bombed by Nato. Something similar had happened in Afghanistan, Iraq and Libya. Because of Western exploitation and manipulation, the Arab Spring had become the "Arab Winter".

Russia itself, meanwhile, had been "cheated and deceived" as Nato steadily expanded eastwards, the US pursued missile defence plans, and issues such freer trade and visa liberalisation were delayed.

Putin’s bitterness and bile poured out unchecked, mixed with an apparently bolstered but unfounded confidence that the US and the European Union are incapable of beating back Russia’s new cross-border assertiveness.

Western countries claimed Russia had broken international law by intervening in Crimea, he said. But this was sheer hypocrisy – another glaring example of the double standards displayed by the US and others. "It is good they realise international law still exists. Better late than never," he said. – © Guardian News & Media 2014