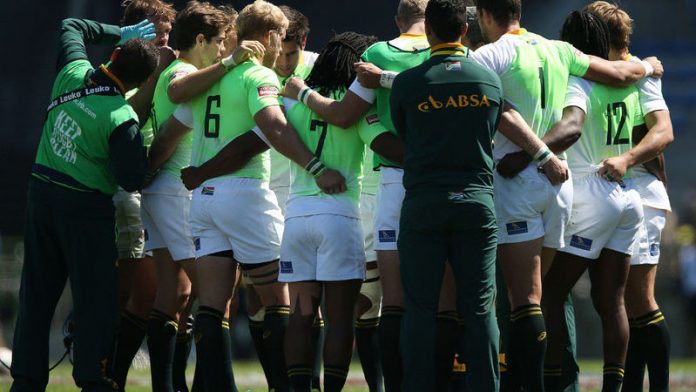 Coach Neil Powell's team will now face the US in the last cup quarterfinal fixture on Sunday morning in their quest to qualify for the semifinals of the HSBC Sevens World Series.

On Saturday, the Blitzboks defeated Argentina 28-12 after the teams were tied 7-all at halftime.

South Africa got their campaign under way in the early morning hours with a 26-12 win over Kenya. They initially struggled to get going against the tenacious tournament hosts, Japan, but a better second half secured them a comprehensive 33-5 victory.

In their final match of the day, the South Africans were left frustrated by unforced errors and some solid tackling by the physical Argentinian outfit, especially during the first half.

Their cause was not helped when wing Jamba Ulengo was yellow-carded after being spotted throwing the ball away, which prevented the opposition from launching a quick counterattack.

Improved performance
During the halftime break, Powell urged his team to keep their shape and to work on their discipline, and their improved performance netted them three well-worked tries in the second half and a comfortable victory.

Martin Rodrigues opened the scoring for Argentina after a patient build-up, while Stephan Dippenaar scored just before the break for the Blitzboks. Kwagga Smith (two) and Steven Hunt added three more tries after the break.

"I am glad we qualified for the quarterfinals but not too pleased with our performances. We will have to improve and play much better against the US if we want to reach the semifinals," Powell said. "The US showed today they are a strong side and will be difficult to beat."

The Springbok Sevens have so far managed to reach the semifinals of each of the previous five rounds of the HSBC Sevens World Series. They are just two points behind leaders New Zealand (99 points) on the World Series standings.

The quarterfinal line-up for the Tokyo Sevens on Sunday is: New Zealand vs Australia, Fiji vs Kenya, England vs Canada and South Africa vs US. – Sapa

The Blitzboks speedster is entering Super Rugby with a firm eye on the Springbok jersey.
Read more
Sport

The team has set an example that the 15-man format and other sports could follow.
Read more
Sport

The Olympics in Rio are the game-changer. Suddenly nations that care little for rugby have diverted funds to the sport.
Read more
Sport

South Africa beat New Zealand 26-17 in the the final round of the world sevens circuit on Sunday.
Read more
Sport