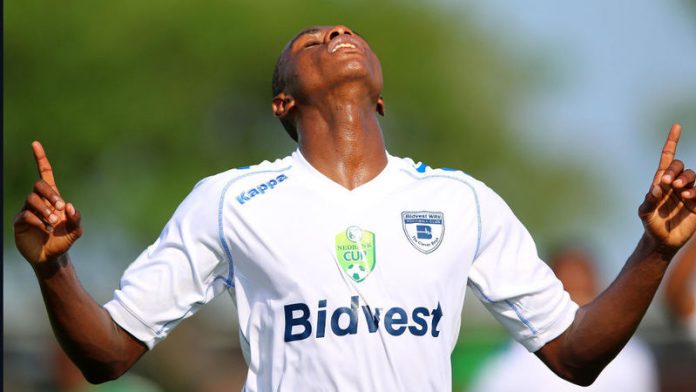 Papy Faty bagged a brace as a 10-man Bidvest Wits team thrashed AmaZulu 4-1 in their Nedbank Cup last-16 encounter at the Princess Magogo Stadium in KwaMashu, north of Durban, on Saturday.

Sthembiso Ngcobo opened the scoring against his former side after 15 minutes, before Faty netted a goal either side of halftime.

The hosts began brightly and caught the visitors on the back foot after just three minutes, when Bongani Ndulula sprung the off-side trap and was clean in on goal, only to have Moeneeb Josephs dive to his left and save the strike brilliantly.

Jabulani Shongwe had Wits' first opening, which came when the home defence kept backing away, allowing the midfielder time and space, although he could only drag his effort wide to the left.

Probing cross
The Students went ahead after 15 minutes, when Siboniso Gumede delivered a probing cross to the near post that saw Philani Zikalala rush off his line and Ngcobo cleverly beat him to it with a header that rolled into an empty net.

Usuthu tried to hit straight with a free kick that was bent just over by Ruzaigh Gamildien and an Ayanda Dlamini effort that was side-footed wide after the striker had been put through on the right side of the box.

But they were hit again by a Gumede ball from the right flank and this time Faty was on hand at the near post as he bundled in unmarked after 29 minutes.

Shongwe had a chance to make it 3-0 before the break, but he wasted too much time and ended up blasting the ball over the goals.

At the other end, Njabulo Manqana and Tamsanqa Teyise put two further chances over giving Wits a comfortable halftime lead.

Lacklustre defence
Faty made it 3-0 after halftime by capitalising on more lacklustre home defending to turn smartly and thump the ball into the back post after a long throw-in from the same right flank.

Ndulula then had another chance to make his mark, but saw an acrobatic header cleared off the line by Kwanda Mngonyama.

Despite Wits losing midfielder Ntshangase for a second yellow within seconds of the first after 71 minutes, they stretched their lead with 12 minutes to play as Vilakazi struck in Asive Langwe's squared ball powerfully from the edge of the box.

There was even time for Faty to strike the crossbar in the closing stages.

AmaZulu did manage a consolation goal when replacement Lucky Nguzana slotted in a Goodman Dlamini stoppage-time cross from the right as Gavin Hunt's men completed a comprehensive win.

Penalty drama
In the Maritzburg vs Stars game at the Moruleng Stadium outside Rustenburg on Saturday, goalkeeper Virgil Vries saved two spot kicks as Maritzburg United booked their place in the Nedbank Cup quarterfinals by securing a 3-1 victory over Platinum Stars in a penalty shootout.

With the scores level at 1-1 after regulation time, neither side was able to find the back of the net in 30 minutes of extra time.

After a tame start to the match, played in extreme heat, Maritzburg fluffed a double chance in the 16th minute.

Orlando Smeekes sliced an attempt across the face of goal, which hit the left post, and Nhlanhla Vilakazi fired straight at Stars shot-stopper Siyabonga Mpontshane off the rebound.

Vries, the protagonist of the second half, was called to action in the 37th minute, diving to his right to save a close-range strike by Mogakolodi Ngele.

Ngele delivered the set piece to Issa Sarr, who flicked in a header and placed his side in front at the break.

But the visitors struck back shortly after halftime, when Smeekes rounded defender Benson Mhlongo and played across to Heinrich Isaacks, who maintained his composure on the line to score the equaliser.

Maritzburg had another opportunity just two minutes later, with Smeekes getting in a cross from the right. But Vilakazi again fired his volley straight to Mpontshane.

Hitting back against the run of play, Stars took control with 35 minutes remaining and dominated the rest of the match.

Wasted chances
Charging forward on the counterattack, Siphelele Mthembu wasted two chances in the space of a minute as the home side piled on the pressure.

First Mthembu beat Vries in the box, but hit the side netting with a left-footed shot in front of an open goal, and just seconds later he outsmarted Vries again but slammed his attempt against the upright, with defender Robyn Johannes lurking at the near post.

Vries was having none of it, however, when he got down low to his right to save strikes from Nduduzi Nyanda and Ngele on either side of the hour mark.

The Maritzburg keeper again faced a one-on-one situation with Mthembu with 16 minutes left in the game, and while the Stars striker got past defender Mario Booysen, Vries was able to get his body in the way and the scores remained level till the end of regulation time.

With both sides visibly tiring in the warm conditions, the hosts had the best chance of first-half extra time when Vries, the man of the match, punched away a solid attempt by Thabiso Semenya and then smothered the rebound shot from Nyanda.

Maritzburg came close in the second stanza of extended play when David Booysen climbed high to connect with a Bhongolwethu Jayiya corner.

Mpontshane pulled off a fine save, however, to deny Booysen's header as the match was decided on spot kicks. – Sapa