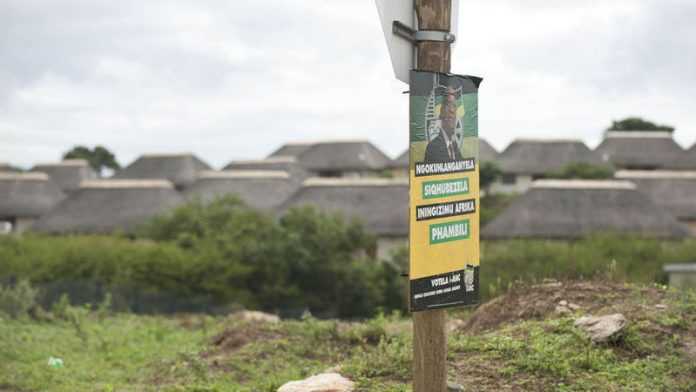 "As we mark 20 years of freedom and democracy this year, it is an opportunity to celebrate all the achievements that South Africans have scored in all walks of life, working together," he said to the thousands of ANC supporters gathered at the George Thabe Cricket Pitch in Sharpeville, Gauteng.

"We now live in a thriving constitutional democracy with equal citizenship for all and a respect for human rights and dignity," he said.

Zuma commemorated the lives lost in Sharpeville on March 21 1960, when the police opened fire on thousands of people protesting against unjust apartheid laws, killing 69 people and wounding 180 others.

The day is remembered in South Africa as Human Rights Day and commemorates the Sharpeville massacre.

He said that the 20 years of democracy has "not been easy because the legacy of apartheid is huge and the backlogs are massive".

Zuma said that in the next five years, government would work even harder to improve the quality of life of all South Africans. Every household should have access to water, electricity, decent schools, clinics and an economy that creates jobs.

No mention of Nkandla
The president made no mention of the public protector's controversial Nkandla report during his speech.

Public protector Thuli Madonsela released a damning report on Wednesday into state-funded renovations to the president's private homestead, from which she found that Zuma and his family had "unduly benefited".

The ANC was not the only political party speaking at Sharpeville to commemorate Human Rights Day. The Economic Freedom Fighters (EFF) and the Democratic Alliance (DA) were also present.

Earlier, a group of Economic Freedom Fighter (EFF) members blocked the street to the stadium, dancing and singing songs praising their leader, Julius Malema, but soon moved their gathering slightly away from the stadium.

But the DA's Mmusi Maimane said ANC members attacked their convoy en route to the memorial. "We were forced to retreat for safety when the only intention was to complete the wreath-laying," Maimane said.

Unwavering support
Sharpeville was coloured yellow, red and black as the ANC, EFF and the PAC commemorated Human Rights Day in the historical township in Vereeniging, south of Gauteng.

Thirty-year-old Duduzile Skhosana came by bus from Siyabuswa, Mpumalanga to celebrate the day.

He said he was a loyal ANC supporter and would be voting for the party come the general elections on May 7.

"There is still a lot to be done … I am still going to vote ANC," he said.

"The opposition thinks Zuma is corrupt but as a leader people are always waiting for him to make a mistake but we support him nevertheless."

Noma Mpumula (35) and Ntoiseng Motaung (25) drove by car from Sebokeng, near Vanderbijlpark.

They said they were staunch supporters of the ANC because it had done a lot for them.

"We don't believe in [President] Jacob Zuma, we believe in the ANC. The ANC is not Zuma," Mpumula said.

"He must be removed because he is abusing money and ruining the party's reputation," Motaung said.

Heroes
They vowed to keep voting for the party for the sake of their heroes.

Sixty-year-old Maria Mabaso from Moroka, Soweto had travelled to the George Thabe stadium to see Zuma, who addressed the thousands of people at the stadium.

"I was happy to see Zuma. It doesn't feel good to hear all the negative things about him.

"We as black people like to judge one another, white people also abuse money."

They said they had come to the stadium to celebrate and to understand what made March 21 a historical day.

"Our parents and grandparents tell us about it and we were happy to see Zuma," Maqhuzu said.

"I thank the ANC for what it has done for us and our parents," Mahlong said.

"We are able to eat for free at school, we get free uniform, I say thank you to the ANC that I was born free."

The two said they would not abandon the ruling party as everyone made mistakes.

Bad memories
They said the EFF were constantly trying to recruit young people in the area.

"Julius Malema is a snake, he makes empty promises. We don't like him."

Johanna Malefane (69) whose husband died on March 21 1960 at the age of 17 when the massacre took place, said the day brought about bitter-sweet memories for her.

"It is good that we commemorate the day but it also brings back memories of our husbands who died on that day," she said.

"I love Sharpeville, I will never leave it. I have built myself a house here, not a government's house, my own."

She said she would never abandon the ANC and that she loved Zuma.

"He takes care of us elderly people. I don't listen to all the negative things about him, I just know his kindness."

'Keeping an eye on Julius'
Two EFF supporters, who would only give their first names, said they had lost hope in the ANC.

"We have been loyal to the ANC forever but they do nothing for us, they only pop up on the 21st of March," 50-year-old Itumeleng said.

"Our children are done with school but they are not working. Malema is going to do better."

Mmalefu (51) said she wanted to support a party that treated its members well.

"ANC is Zuma, no one reprimands him, they all support him," she said.

"We must stop putting these people on pedestals … We are also keeping our eye on Julius."

They said they had lived in Sharpeville their entire lives and had seen little change in the area.

ANC 'disingenuous'
The Pan Africanist Congress (PAC) held a joint commemoration with the EFF across the road from where the ANC had its ceremony.

Thousands of ANC supporters were treated to a number of performances on stage after Zuma addressed the crowd.

PAC secretary general Mike Muendane said the ruling party was being disingenuous by hosting the event without acknowledging the PAC.

"It shows how disingenuous the ANC is because they know the day is associated with the PAC," he said.

Human Rights Day is celebrated on March 21 in remembrance of the Sharpeville massacre which took place on March 21 1960.

The massacre occurred at the Sharpeville police station in the Vaal when black South Africans, led by the PAC, protested against the pass laws.