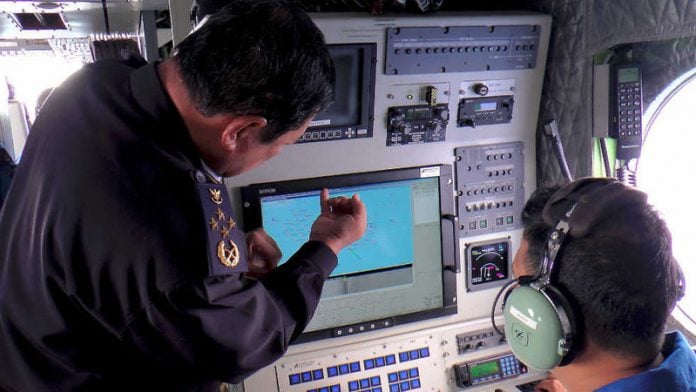 New French satellite images show possible debris from a missing Malaysian airliner deep in the southern Indian Ocean, Malaysia said on Sunday, adding to growing signs that the plane may have gone down in remote seas off Australia.

The latest lead comes as the international search for Malaysian Airlines Flight MH370 entered its third week, with still no confirmed trace of the Boeing 777 that vanished with 239 people on board.

"This morning, Malaysia received new satellite images from the French authorities showing potential objects in the vicinity of the southern corridor," the Malaysian Transport Ministry said in a statement. "Malaysia immediately relayed these images to the Australian rescue co-ordination centre."

The statement gave no details as to whether the objects were in the same vicinity as the other possible finds in a vast swathe of some of the most inhospitable sea territory on Earth.

Australian Prime Minister Tony Abbott said there was "increasing hope" of a breakthrough in the hunt for the plane on the strength of Chinese and Australian satellite images of possible large debris from the plane in the southern search area.

Flight MH370 vanished from civilian radar screens early on March 8, less than an hour after taking off from Kuala Lumpur on a scheduled flight to Beijing.

An international force resumed its search efforts on Sunday, zeroing in on two areas some 2,500 km southwest of Perth in an effort to find the object identified by China and other small debris including a wooden pallet spotted by a search plane on Saturday.

"The weather in the southern Indian Ocean is much clearer today than the past couple days, allowing for the full spectrum electronic and visual of search capability," Commander William J. Marks, spokesman for the U.S. 7th Fleet, said in an email.

The Chinese discovery was dramatically announced by Malaysia's acting transport minister, Hishammuddin Hussein on Saturday, after he was handed a note with details during a news conference in Kuala Lumpur.

China said the object was 22 metres long  and 13 metres wide, and spotted around 120 km  "south by west" of potential debris reported by Australia off its west coast.

It could not easily be determined from the blurred images whether the objects were the same as those detected by Australia, but the Chinese photograph could depict a cluster of smaller objects, said a senior military officer from one of the 26 nations involved in the search for the plane.

The wing of a Boeing 777-200ER is approximately 27 metres long and 14 metres wide at its base, according to estimates derived from publicly available scale drawings. Its fuselage is 63.7 metres long by 6.2 metres wide.

Hijack or sabotage
Investigators believe someone on the flight shut off the plane's communications systems, and partial military radar tracking showed it turning west and re-crossing the Malay Peninsula, apparently under the control of a skilled pilot.

That has led them to focus on hijacking or sabotage, but they have not ruled out technical problems. Faint electronic "pings" detected by a commercial satellite suggested it flew for another six hours or so, but could do no better than place its final signal on one of two vast arcs.

While the southern arc is now the main focus of the search, Malaysia says the search will continue in both corridors until confirmed debris is found.

"Hopefully we will eventually provide some sort of closure or at least understanding of what happened on board Malaysian Airlines Flight MH370," Australian Deputy Prime Minister Warren Truss said. "The search will continue and will continue as long as there's hope."