No end in sight for Amcu platinum strike 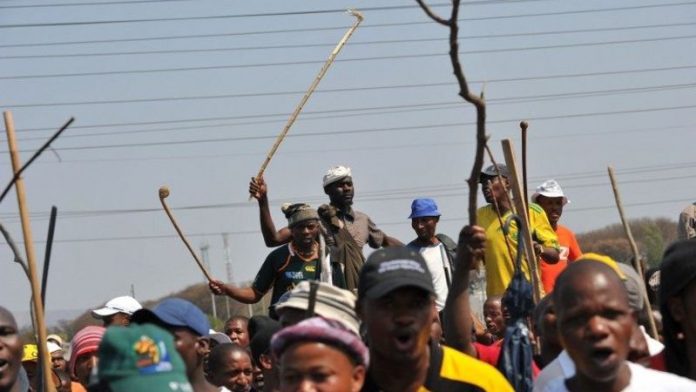 The world's largest platinum miner will respond to its labourer's memorandum of grievances on Monday, but the end to a two-month long strike in the sector is nowhere in sight.

Anglo American Platinum will respond to a list of grievances as detailed in a memorandum, submitted by the Association of Mineworkers and Construction Union (Amcu), by the close of business on Monday, company spokesperson Mpumi Sithole told the Mail & Guardian.

On Tuesday March 18, majority union Amcu members who work for Anglo American Platinum marched to the company headquarters in Johannesburg to hand over a memorandum of grievances, with a deadline to respond by close of business on Monday March 24.

The memorandum deals with the issue of salary increases, Amcu treasurer Jimmy Gamma told the M&G. "We want them to come with a revised offer or to propose a meeting to take negotiations further," he said. "We expect them to respond. If they don't respond we will just intensify our strike going forward … There are various ways of doing that that one would not necessarily share with the media."

Anglo American Platinum's anticipated response on Monday will be the latest development in a protest which began on January 23 and is entering its ninth week as Amcu stands firm on its demand for a minimum wage of R12 500 from the three largest platinum mining companies in the world – Anglo Platinum, Impala Platinum and Lonmin.

Halted negotiations
Negotiations have halted since the Commission for Conciliation Mediation and Arbitration (CCMA) mediation process, facilitating talks between the platinum sector and Amcu, was suspended indefinitely earlier in March to allow stakeholders time to reflect on the current offer.

Since the start of the strike, the union has revised its demand to achieve R12 500 in basic salary over three years. "However, this revised demand translates into an average annual increase of between 30% to 40% year on year and remains unaffordable," the employers said on March 4.

Anglo American Platinum was the only one of the three major platinum employers to receive the memorandum so far.

Taking turns
Chamber of Mines spokesperson Charmane Russell said no other mining companies will have input and "the response will be only from Amplats to Amcu".

But other platinum producers will get their turn, according to Amcu.

"We started with Anglo because Anglo is the biggest platinum producer and employer," Gama said. "The other two [Lonmin and Impala] will follow in due course."

Amcu led its members in a march to the Union Buildings on March 6, where it invited platinum producers to send representatives to be available to receive a memorandum. But they did not do so. CCMA director Nerine Kahn said the body will remain available to all parties when they are ready to return to the negotiating table.

The Chamber of Mines has come under fire for comments by its chief negotiator, Elize Strydom, that question the CCMA's ability to handle the mediation between the parties, as published by the Sunday Times on March 9. The CCMA demanded that the Chamber retract its comments.

On March 20, the National Union of Metalworkers of South Africa accepted the terms of Anglo American Platinum's wage offer of up to 8.5% per annum for certain employees.

"The employers remain open to engagement with Amcu within a reasonable settlement zone," Russell said. "Losses are mounting – for employers and employees. However, no talks are currently scheduled."

Employees have lost R4.4-billion in earnings since the start of the strike, while the companies have collectively lost R9.9-billion in revenue.