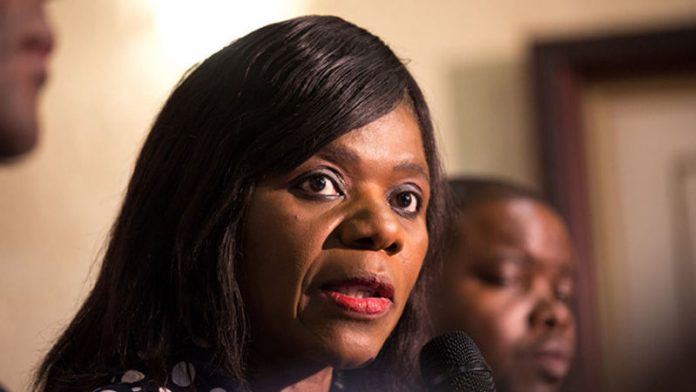 The ANC released a statement on Monday saying that it "notes with regret the disparaging comments about the public protector that have been attributed to the ANC Youth League and the Congress of South African Students [Cosas]."

The youth league said on Thursday that public protector Thuli Madonsela must step down.

Masina was speaking at a media briefing at the ANC's Luthuli House headquarters shortly after the party held a separate media briefing on Madonsela's report on President Jacob Zuma's private Nkandla homestead.

The ANC said the youth league's remarks do not reflect the views of the party and are in contrast with the manner in which it would expect members of the organisation to conduct themselves in debate.

ANC secretary general Gwede Mantashe has summoned the youth league and Cosas to explain their remarks.

The ANC said it supports and has confidence in the office of the public protector.

'Sheer disgust'
Standing at the same podium where Mantashe earlier said the party had no intention of ignoring or undermining Madonsela's report, Masina said the youth league noted the report with "sheer disgust".

He accused Madonsela of being biased and sensationalist, saying her office was trying hard to "poison the public against the ANC".

Madonsela released her report on costly security upgrades at Zuma's Nkandla homestead in KwaZulu-Natal on Wednesday, saying Zuma should have asked questions about the scale, costs and affordability of security upgrades which could end up costing as much as R240-million.

She found that Zuma and his family benefited unduly from the upgrades.

But Masina said Madonsela had no authority to speak on such matters.

"She isn't competent to speak on issues of security," said Masina, adding that Madonsela thought she was above the law.

Too busy
Youth league national co-ordinator Magasela Mzobe said Zuma had no time to question issues about swimming pools and other things that were built on his property "without his authority".

"Zuma didn't ask for a swimming pool," said Mzobe. "He is busy running the country. People who authorised for that should pay."

Madonsela had recommended that Zuma pay back a percentage of the cost of upgrades to his home.

Addressing the media earlier, Mantashe said the ANC needed to decide if it would encourage Zuma to follow Madonsela's recommendation to pay back some of the money.

"The public protector said the president must pay a reasonable percentage … and the question is whether we will encourage him to do so," said Mantashe.

He said the biggest problem with the cost of the upgrades at Nkandla was "inflation of prices".

"This project is a sample to say we should look at whether prices aren't inflated in other areas."

All officials involved had to be brought to book and all funds acquired inappropriately had to be paid back, said Mantashe.

Accusations
While Madonsela emphasised that the probe into upgrades had no political motive, the youth league accused her of having close relations with the Democratic Alliance (DA) and pushing an agenda.

"Madonsela has attended tea parties with the DA … She has even attended some of their rallies," said Mzobe.

The league intended to write a letter to Police Minister Nathi Mthethwa to request that he investigate the leaks of some documents from Madonsela's office.

Asked whether the league had ever engaged with Madonsela or intended to, Masina responded that they had never done so and would not.

"She is arrogant … She does not deserve our attention. We don't have time to engage with her," said Masina.

The youth league said those parties had no case.

The league had not consulted the mother body regarding its statement, nor had it seen the ANC's statement on its stance on Madonsela's report. – Sapa