CTIJF: Fashion and all that jazz 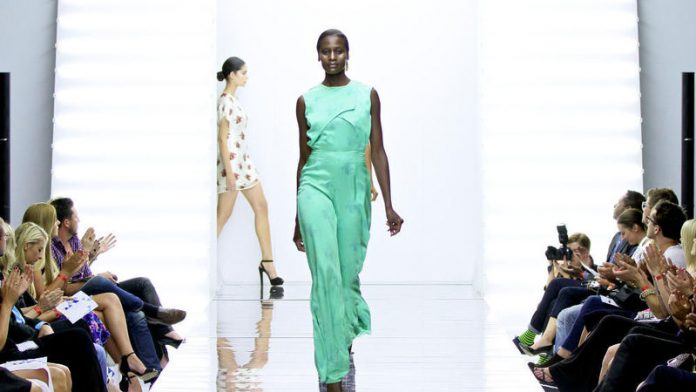 Julia M'Poko (25) and Ernest Mahomane (30) are two of a trio of fashion designers showing six looks at the Fashion and All that Jazz show as part of the Cape Town International Jazz Festival (CTIJF) on March 27. Winner of the AFI Young Designer of the Year 2012, Kim Gush is the third exhibitor.

Having launched their own labels only last year, M'Poko and Mahomane are focused on learning the business and honing their skills, and not interested in the fame.

Designers were given a brief to cater for a festival audience while maintaining their signature.

CTIJF has also partnered with the South African Clothing and Textile Workers Union, to "encourage the design, making and purchase of locally produced goods".

Julia M'Poko
Pretoria-raised M'Poko completed four years of studies at the Cape Town College of Fashion Design. Last year she was one of eight participants in the Elle Rising Star Design Awards and showed her debut collection at Mozambique Fashion Week.

"It's a little intense. I wasn't planning on becoming a designer for another 10 years. After graduating I wanted to work for other people and gain experience in the industry so that once I come out with a brand I would know exactly what I'm doing," she says.

"There's a lot that you don't learn in college. I wanted to learn how to produce and build a brand. I wanted to study business perhaps. But then the Elle show happened. Now I'm a designer."

M'Poko is taking baby steps though, sewing at the kitchen table of her St George's Mall apartment in central Cape Town. She keeps her brand close to home too, having named her label Julienne as a tribute to her grandmother, who taught her how to sew.

"She used to wake up at 4am and started designing and sketching wedding dresses and so on and used a lot of African fabric. I’d take scraps of her fabric and try and assemble doll's clothes," says M'Poko.

Turning to her own collection, M'Poko said she was "inspired when I went home to Pretoria and saw all these Jacaranda trees. I thought how Jacarandas would look if they had a feeling and sound. So I drew a Jacaranda sound wave and imagined what that would look like. I sketched that and had the fabric printed.

"I’ve never really seen an African print in purples and blues. I wanted it to be really soft and feminine. It's a different kind of colour palette that I would normally use."

She adds: "I thought about all the textiles that South Africa has to offer and tied it into the whole Jacaranda theme and played with more organic fabrics. I played with leather, mohair and silk. I made this collection for a vibrant, confident young woman who wants to look good all day. It's ready-to-wear but with glamour."

M'Poko says she does "love the fashion show experience" but, unlike numerous young startups, is not very interested in being famous.

"One of my mom's friends, who is also a designer, told me, 'You don't have time to be famous. You need to be sitting and designing clothes for clients every day. Forget about fame. It's not going to pay your bills'. That's so true," she says.

"You can be in every magazine but that's not going to pay your bills. If my clothes could be shot without a photo of me or without me having to walk onto the runway that would be awesome because I’m a very shy person.

"I would like people to wear my clothes. I want to turn this into a business, find people that I can employ and slowly but surely create a nice little business for myself."

Ernest Mahomane
Mahomane started sewing in his mother's studio when he was still in high school. He studied fashion at the University of Johannesburg and worked as a buyer for a retailer before opening his own studio.

"When I graduated, I was so afraid of being one of those designers who walked in young and then exited from the industry before 30. I wanted to take my time, discover myself and not be pushed in a direction that I wasn't interested in," he says.

"When I moved to Cape Town, I met a lot of youngsters who have just rushed into things and then it didn't work out. I want to still be designing years down the line.

"But even with this media thing, after my show I was so afraid of the media. I didn't want to talk about my work. I wanted them to decide for themselves if it was good or not. I still need a few more years to build my confidence. I'm still scared of what might happen. I know what I want to show though."

Mahomane says his jazz collection is in honour of late African singer Miriam Makeba. "I wanted the look to be African. I looked at all the musicians that represented Africa all over the world. The one woman who stood out was Miriam. She travelled all over the world and her style was beautiful," he says.

"I researched her so much. I named the collection Songbird. It's going to be chic glamour – a little twist on Miriam on stage."

Mahomane says he designs clothes for a sophisticated woman in her 20s up to her 40s.

"Having worked with clients, a person walks into my studio and they say they want this. As a designer, you want the money and you make it. I'm now past the point of making something that someone wants. I want to make something that looks beautiful," he says.

The Fashion and All that Jazz show takes place at the Cape Town International Convention Centre on March 27. Jimmy Nevis and Shakatak will also be performing. Tickets costs R500 per person or R5 000 for a table of 10 and includes a three-course meal and complementary wine.

After news that house songstress Lady Zamar opened a rape case against hip-hop crooner Sjava, the Cape Town International Jazz Festival has removed him from its 2020 lineup
Read more
National