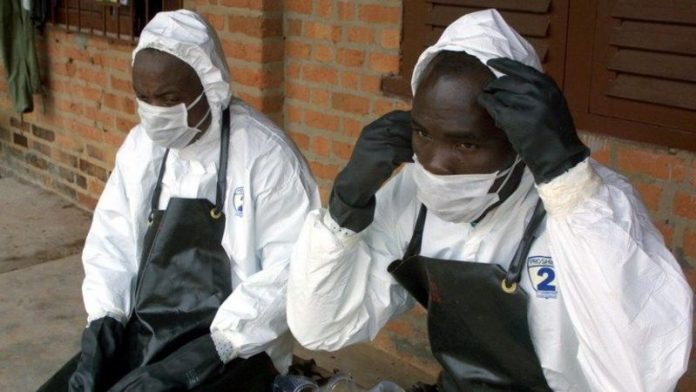 Guinea battled on Wednesday to contain an Ebola outbreak threatening neighbouring countries as fear and confusion gripped communities under siege from one of the deadliest viruses known to mankind.

Global aid organisations have sent dozens of workers to help the poverty-hit west African nation combat the haemorrhagic fever, with health officials raising the death toll by two to 63.

"On Monday, two more deaths were reported in our area. People are really frightened," Joseph Gbaka Sandounou, a unit manager for Plan International was quoted as saying in a statement released by the organisation.

"They have seen people die in a matter of just two or three days. They are constantly worried who is going to be the next fatality."

The British-based charity said people of Guinea's southern forests – the epicentre of the outbreak that began in February – had been terrified by seeing neighbours bleeding severely as they were struck down by the virus.

"People have never experienced anything like this before. Rumours are rife among communities who are trying to come up with their own explanations," said Sandounou.

'Molecular shark'
Ebola had never spread among humans in west Africa before February but five deaths being investigated in Liberia, one in Sierra Leone and others still being tested could bring the total in the epidemic to above 70.

"We are not at the end of this epidemic, we continue every day to record a number of new cases or fatalities," said Guinea's chief disease prevention officer Sakoba Keita, confirming the two new deaths.

"But the daily incidence is lessening.We believe the peak has passed."

The tropical virus – described in some health publications as a "molecular shark" – causes severe fever and muscle pain, weakness, vomiting and diarrhoea, shutting down organs and causing unstoppable bleeding in severe cases.

Other highly-contagious tropical bugs, including the Marburg virus and Lassa fever, can lead to similar symptoms but the authorities have not announced which other pathogens have been picked up in test samples.

"It is not just people but also the health workers who are extremely worried. When the epidemic broke out a number of health workers had no clue what they were handling nor did they have the protective gear," said Sandounou.

"As a result, a number of Ebola victims have been health workers.

We heard reports that health workers turned patients away due to fear in some cases before the health administration swung into action."

Infections
Sierra Leone warned on Tuesday that a 14-year-old buried recently may have been infected in Guinea, while the deaths of four women and a boy in Liberia are being tested for the killer virus.

Guinea has banned inhabitants of the south from eating bats, a common feature of the local diet, as the creatures are considered to be the natural host of the virus.

Transmission of Ebola to humans can come from wild animals, direct contact from another human's blood, faeces or sweat, as well as sexual contact or the unprotected handling of contaminated corpses.

Doctors Without Borders, which is known by its French initials, MSF, said the spread of the disease was being exacerbated by people travelling to funerals in which mourners touch the dead person's body.

No treatment or vaccine is available for Ebola, and the Zaire species in Guinea – first found in the Democratic Republic of Congo 38 years ago – has a 90% death rate.

Guinea is one of the world's poorest nations despite vast untapped mineral wealth, with a stagnating economy, youth unemployment at 60% and a rank of 178th out of 187 countries on the UN's Human Development Index.

Health help
Plan, MSF and other aid organisations are working are providing treatment and sanitation facilities and relaying public health information, especially to schools, via the media and text messages.

MSF emergency coordinator Marie-Christine Ferir said the priority was isolating patients showing symptoms, protecting their families and neighbours while treating them with dignity.

"We want to avoid the danger of the population panicking and it is important to transmit all the information necessary to understand the disease and how people can protect themselves," she added. – AFP