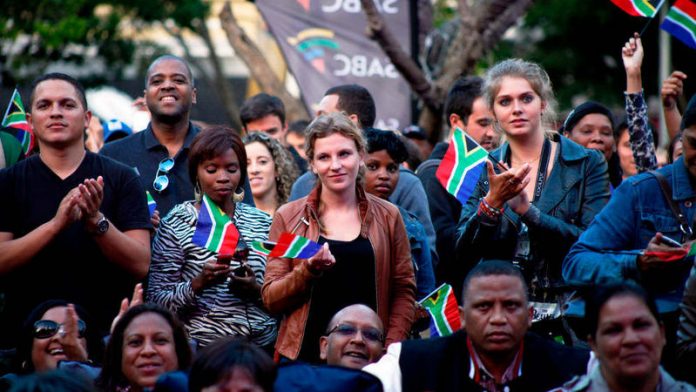 A week before the two-day Cape Town International Jazz Festival (CTIJF) – which draws scores of jazzophiles, vendors and tour guides – the city saw the start of social initiatives centred on music for the youth.

Stumbling on stage at the rehearsal for one of the training programmes, the arts and cultural focus school show, was the Intyholo music group from Gugulethu. In the once whites-only Groote Schuur High School, the audience of mainly black and coloured schoolchildren waited for the group of young girls and boys to synch their borrowed horns and the older youth to fine-tune their voices to the instructions of a impassioned and slightly dishevelled bandleader. Finally things came together, and the band harmonised melodies and lifted the audience off their seats to dance.

This year's CTIJF happens at a time of the country's collective contemplation, spurred on by the death of Nelson Mandela, the 20th anniversary of democracy and the upcoming general elections. From its festival line-up to its social programmes and visual art exhibition, the CTIJF, which celebrates its own 15-year anniversary, shows a nation in mourning, deliberation and pro/regress.

Unlike the glitz and glamour that tends to spotlight the main event and its international guests, interactive shows like Gigs for Kids and workshops like the arts and cultural focus school programme brings a light version of the show to a side of Cape Town that those who enjoy the CTIJF at the city's international convention centre might not get to see.

Not only are economic imbalances revealed beneath the bright lights at the CTIJF's arts and cultural focus school show – which brings together schools and music groups from Cape Town in a series of workshops conducted by professionals who aim to help children understand the "real world" of the music industry – but so are gender issues.

"When you're a girl playing jazz, it really stands out because there aren't a lot of girls who would take up the responsibility of playing an instrument like the bass," says 15-year-old Lisa-Jade Wesson, while showing her calloused fingertips outside the school's rehearsal venue a day before the school show. "Bass guitars are usually thought of as a man's instruments," she says. "It's not an easy thing to play but I enjoy it." Despite the balanced ratio of girl instrumentalists to boys at the school concert rehearsal, looking at the line-up for the jazz festival says something different about the continuation or longevity of women jazz musicians in a male-dominated genre.

With only US jazz vocalist Carmen Lundy among a sea of male jazz bandleaders on this year's line-up, some might wonder where the rest of the female jazz musicians are? "I think there's a problem in this country with the perception of women artists. Singing is over-represented as a profession for women and although we have female instrumentalists, they are very often not considered," says music writer Gwen Ansell.

'Lack prominence'
Speaking to Ansell about the lack of women jazz acts at the festival, she tells me, "I cannot think of a woman bandleader in this country. I'm sure there are some but they lack prominence and therefore one doesn't think of them. I do think that many South African women have therefore chosen to work overseas. A good example of that is [South African saxophone player] Shannon Mowday."

Ansell, who also runs the CTIJF arts journalism workshop ahead of and during the festival, says, "We have such a small number [of women bandleaders] to choose from – yes, Melanie Scholtz leads her own band, but she was at the festival a couple of years back and because of the issue of rotation, the festival will therefore be reluctant to have her back too quickly."

Chatting to Scholtz before the CTIJF's elections debate, of which she was a panel member, she agrees that jazz, "with its big bands and quintets", is a male-dominated industry. However, she feels South Africa "has a lot of women who are choosing to be seen as 'musicians' as opposed to 'female musicians' or 'female instrumentalists'." Twenty years into democracy, the Capetonian singer says there are more women "learning to play instruments that would have in the past been male-dominated, like saxophones and trumpets".

As the country attempts to move away from its racially divided past that also slugged along with it gender and class divisions, the CTIJF shows not only South Africa's progress but its slow move away from these divisions. Is a two-day music festival able to speed up the progress to a united future? Sponsored by the department of arts and culture and the SABC, questions about the CTIJF's role in attempting to address gender discrimination or impact the city's poorer communities come to the fore. Regarding the latter, the festival reaches out of communities beyond the orderly city limits with its arts and culture focus schools event and the Intyholo jazz development programme, which is a series of interactive workshops for the youth of previously disadvantaged areas in the city.

Facilitator of the arts and cultural focus schools programme Camillo Lombard says that besides working with schools from the Western Cape, "reaching areas as far as Worcester and George", he is "working on doing a road show so that we can inspire and cultivate the music appreciation and music awareness with the youth".

"However, speaking to Mashiya Mgojo from Gugulethu at the free CTIJF community concert at the Greenmarket Square in the city centre relays a different story especially for older music lovers. “Not a lot of people in Gugs can afford to go to the jazz festival … tickets are too costly and sell out quickly,” says the airline guest service agent. Despite the high-price tickets, the Mgojo says she enjoys “the vibe of the free concert”, to which she’s been going to for the last three years."

Mashiya Mgojo from Gugulethu. (All photographs by Themba Vilakazi)

Reflection
The festival as a reflection of society, pays tribute to the man who tends to represent the rainbow nation ideal: Nelson Mandela. The former president, who died on December 5, is honoured by the jazz festival's annual photographic exhibition, which takes place at the Duotone Gallery. By paying tribute to Mandela, the exhibition will, according to the CTIJF, display the work of both amateur and professional photographers that "capture the essence of 'jazz in motion' and documents the emergence and growth of jazz globally".

Despite the photography industry's reputation of being a white-male dominated field, photographer and president of the KwaZulu-Natal Society of Art Peter McKenzie says this has slightly changed. "Indeed, the young black photographers cutting it internationally are a minority but there are some who, like Zanele Muholi, destroy that [racial divide]," he says. "There are also a bunch of younger photographers who are coming through with new visual voices, approaches and philosophies to embrace."

Responding to my questions about encouraging integration in South Africa's photography field, McKenzie highlights the importance of struggle photographers mentoring young photographers as a way of moving from our segregated past. McKenzie, who is also a photographer facilitating and mentoring budding photographers at the CTIJF’s jazz photography workshop, commends photographers of his generation for taking budding artists under their wing and influencing them with modern techniques as well as using "their philosophy and experience of taking images during the struggle".

"This combination of the mentorship works really well, and we [the photography workshop] bring that philosophy to the teaching, mentoring and workshops."

Five days after the arts and culture focus schools rehearsals and on the eve of the festival, I finally speak to Intyholo's bandleader, Jabu Mdluli, at the development programme event in Gugulethu. "The instruments that the children are playing have been borrowed to us, but we're desperate for donations,” he says outside the venue.