A little humour has a long way to go 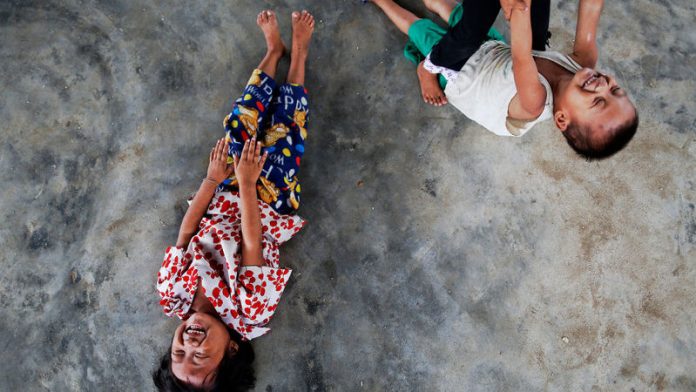 The first replies: "Oh, I know that one. No worries, it'll pass."

Do you know the joke of "no me neither"?

Norwegian (from Ole Goethe, 36)
Two whales are sitting at a bar. One of them suddenly says: "Mmmwaamm!" The second whale looks over and says: "Holy shit, you're fucking drunk."

Finnish (from Antton R, 32)
Which traffic sign allows you to make a U-turn on a highway in Finland?

You are approaching the Russian border.

Hungarian (from Andras Szirko, 30)
What do you call a man who wakes up early in the morning, wears a white apron, bakes bread, but is not a baker at all?

Dutch (by comedian Raven Pandav, 30)
I still live at home. My great-grandparents are from India, they moved to Surinam, and my parents moved from Surinam to Amsterdam.

And I'm born and raised in Amsterdam, but I don't really have a connection with Surinam and India, I feel Dutch.

But it's a little strange living at home with those two immigrants.

Spanish (from Fernando Acuña, 33)
A man enters a store and says: "Fifteen litres of wine please." He's asked: "Did you bring a container for this?" Reply: "You're speaking to it."

Estonian (by comedian Janika Maidle, 22)
I am single by choice.

A choice made by those reluctant to date me.

Russian (from Olga N, 30)
A man walks into a travel agent: "I would like to go somewhere really special."

Travel agent: "We have just the thing: an all-inclusive holiday in Cyprus, flying from Moscow."

Man: "Nah, there have been so many plane crashes, I really wouldn't feel safe."

Travel agent: "OK, I can offer you a cruise around the Greek islands then?"

Man: "But there have been so many cruise-liner incidents …"

Travel agent: "In that case, I can offer you a coach tour of Europe?"

Man: "But the road accidents – they are worst of all!"

Travel agent: "Oh, I think I have just the ticket – a walking tour, but I must warn you: it has sexual overtones."

Bosnian (from Sladjana Perkovic, 31)
A Bosnian catches a goldfish. The goldfish says: "Let me go and I will grant you one wish."

The Bosnian says: "No way, I'll take you to the pawn shop – gold is gold."

Macedonian (from Mila Damyanoska, 22)
Only 20% of Macedonians live in stress and revolt.

The other 80% live in Australia, the United States, Canada, Germany, Sweden, the United Kingdom …

Hebrew (from Rachel Goldberg, 26)
A Polish Jewish woman gets up in the middle of a flight to the United States and shouts: "Is there a doctor here?"

A nice, serious-looking guy approaches her quickly and tells her: "I am. What is the problem?"

Laughing all the way to happiness

Hypnosis is not just about making you cluck like a chicken

Laughter therapy is no joke