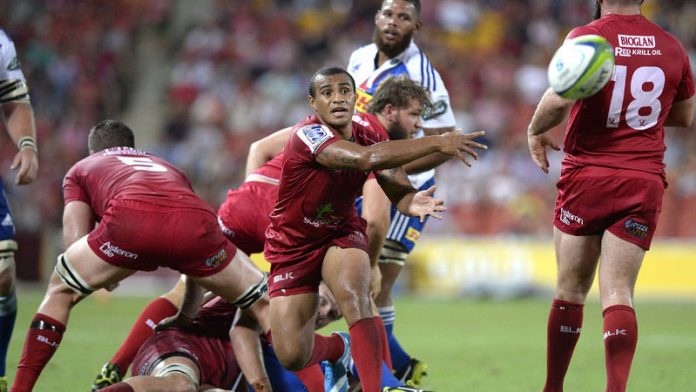 The Stormers scored two tries to one but it was Cooper's 17 points from a conversion, four penalties and a drop goal that got the Reds home.

Queensland were desperate to return to winning ways after losing both their two games in South Africa, while the Stormers return to Cape Town losing all four of their Australasian tour games.

It was a stop-start match, with too much kicking for any attacking momentum to be generated and the Reds benefited from Stormers' mistakes for Cooper to cash in with his penalty goals.

Aplon's night was over midway through the first half when he appeared to badly dislocate his left elbow as he attempted to break his fall in a James Horwill tackle.

Penalty
Queensland hit back with two Cooper penalties and a converted try from close-range by lock Rob Simmons to lead 13-7 before Grant kicked a penalty for the Stormers to trail 13-10 at halftime.

It was a dour contest in the humid conditions and Cooper edged the Reds clear with another penalty and a drop goal before the South Africans lost their second player to injury, lock Jurie van Vuuren (shoulder) with 12 minutes left.

But the Stormers could not bridge the gap and had to be satisfied with a losing bonus point.

"The Stormers are a very physical side, they pride themselves on their defence and their contact work so we knew it was going to be physical," Reds skipper Horwill said.

"We were very disappointed with the way we finished up our South African tour so it was important to come back here in front of our fans and get a win."

"We get ourselves into a position to win the game and it's inexperience and making bad decisions at the wrong time and giving possession away," he said.

"We must start learning from our mistakes, because we are doing the same over and over again each week."

The Stormers leave for home where they will play the NSW Waratahs next weekend, while the Reds have an Australian derby against Western Force in Brisbane. – Sapa-AFP