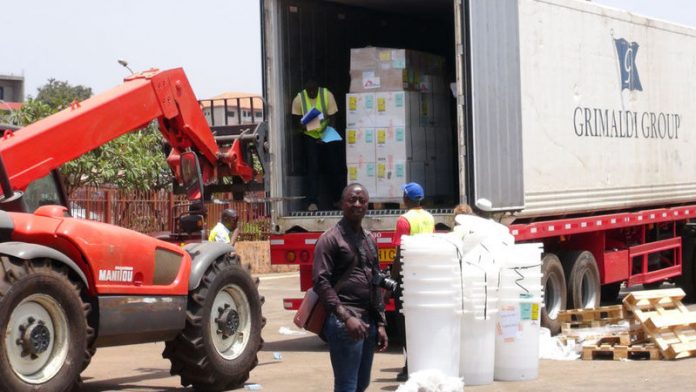 Eight cases have been confirmed in the capital, the Guinean health ministry said on Friday, including one fatality.

All those infected have been put into isolation at the capital's biggest hospital to avoid the highly contagious virus from getting into the population.

Aid organisations have sent dozens of workers to help the poor west African country combat the outbreak of haemorrhagic fever.

"The total number of suspected cases recorded from January to 28 March 2014 is 111 cases of haemorrhagic fever including 70 deaths … or a fatality rate of 63%," said the ministry.

Most of the cases were recorded in southern Guinea but in the past two days it has spread to the capital.

"Intensive case investigations are underway to identify the source and route of these patients' infection, record their travel histories before arrival in Conakry and determine their period of infectivity for the purposes of contact tracing," the World Health Organisation (WHO) said in a statement.

'Untreatable disease'
Guinea is one of the world's poorest nations despite vast untapped mineral wealth, with a stagnating economy, youth unemployment at 60% and a rank of 178th out of 187 countries on the UN's Human Development Index.

Residents of Conakry's suburbs said they feared venturing into the city centre to shop and were keeping their children home from school.

"I wonder what Guinea has done to God to make him send us this untreatable disease … I'm wary of anything that moves that could be a carrier of the disease," said unemployed graduate Abdoulaye Soumah.

The 15-member Economic Community of West African States said the outbreak was now "a serious threat to regional security" and appealed for help from the international community.

The tropical virus – described in some health publications as a "molecular shark" – causes severe fever and muscle pain, weakness, vomiting, diarrhoea and, in severe cases, organ failure and unstoppable bleeding.

Six deaths
Ebola had never spread among humans in west Africa before the current outbreak but further suspected cases being investigated in Liberia and Sierra Leone could push the total death toll beyond 80.

Transmission of Ebola to humans can come from wild animals, direct contact from another human's blood, faeces or sweat, as well as sexual contact or the unprotected handling of contaminated corpses.

The health charity Doctors Without Borders said the spread of the disease was being exacerbated by people travelling to funerals in which mourners touch the bodies of the dead.

Guinea has banned the consumption of bat soup, a popular delicacy in the country, as the fruit bat is believed to be the host species.

'Divine retribution'
No treatment or vaccine is available, and the Zaire strain detected in Guinea – first observed 38 years ago in what is today called the Democratic Republic of Congo – has a 90% death rate.

Customers in a suburban cafe in Conakry described the epidemic as "divine retribution" and "a curse that has befallen us and will allow us to reflect on our daily behaviour".

"There is total panic among the population," said Fanta Traore.

But the WHO played down fears of a massive spread, pointing out that the disease typically caused much less death and sickness than influenza, and adding that it was not recommending travel restrictions.

"Outbreaks tend to be limited. But certainly we need to watch this extremely carefully because there is no treatment, there is no cure and the course of the disease is more often than not fatal," WHO spokesman Gregory Hartl told reporters in Geneva. – Sapa-AFP