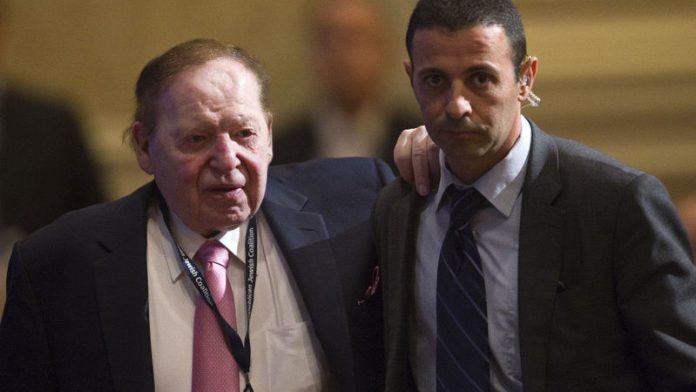 Two of the nation's highest-profile Republican governors on Saturday called for more aggressive leadership on America's challenges abroad, emphasising their support for Israel as they courted powerful Jewish donors gathered in Las Vegas.

New Jersey governor Chris Christie and Wisconsin governor Scott Walker, both considering presidential bids, appeared at the Venetian resort casino along Las Vegas' storied strip, which is owned by Republican super donor Sheldon Adelson. Their remarks during the Republican Jewish Coalition's annual spring gathering were made inside an ornate ballroom two floors from where unsuspecting gamblers played blackjack and roulette.

Two years before the 2016 presidential contest officially begins, the lesser-known competition for the Republican Party's most influential donors is well under way.

No donor is more sought after than Adelson, who is among the 10 richest people in the world. He did not attend Walker's speech, but was seated directly in front of the podium as Christie spoke.

The casino magnate almost single-handedly bankrolled the group behind former House Speaker Newt Gingrich's unsuccessful 2012 presidential bid and later put his money behind Republican nominee Mitt Romney. Now, he is casting for a presidential candidate on whom to shower what could amount to tens of millions of dollars in campaign cash.

Adelson is known for his devotion to Israel, in addition to an aggressive US foreign policy.

Both Christie and Walker stoked speculation about their own presidential ambitions, giving frustrated Republicans advice on how to reclaim the White House in 2016.

Walker declared that the nation needs a "swift and decisive" foreign policy, while insisting that Republicans must find a 2016 presidential nominee from "outside Washington".

Walker conceded that he does not have extensive foreign policy experience, having been focused on state issues as the Wisconsin governor, including curbing the influence of public employee labour unions.

Their comments come as President Barack Obama grapples with the Ukraine crisis. Obama and Russian President Vladimir Putin agreed in a call on Friday to have their chief diplomats meet to discuss a possible diplomatic resolution. Secretary of State John Kerry arrived in Paris on Saturday for talks with his Russian counterpart.

The Las Vegas gathering offered a fresh look into the murky and evolving world of campaign finance – a world with few remaining rules for anyone with deep pockets and a deep desire to influence the political process.

The 2010 Supreme Court's Citizens United decision helped transform a former system that had some loopholes, but generally required disclosure and limits for individual donors.

With a net worth estimated at nearly $40-billion, Adelson is now free to use a collection of super political action committee's and non-profit groups to give and spend unlimited sums of money to influence elections, sometimes without having to disclose his specific role publicly.

He donated more than $90-million to political groups in the last presidential election.

Christie briefly addressed his challenges in New Jersey just days after a report he commissioned cleared him of any involvement in the politically motivated plot to create huge traffic jams at the George Washington Bridge last year.

He promised to be more questioning of his staff.

"I am going to be responsible for all that happens on my watch," he said and later added, "For people in government and people who are intent on providing leadership to a state or to our country, it's strong and decisive action or lack thereof that does define ultimately who you are and what kind of leader you are." – Sapa-AP