Australia out of T20 World Cup 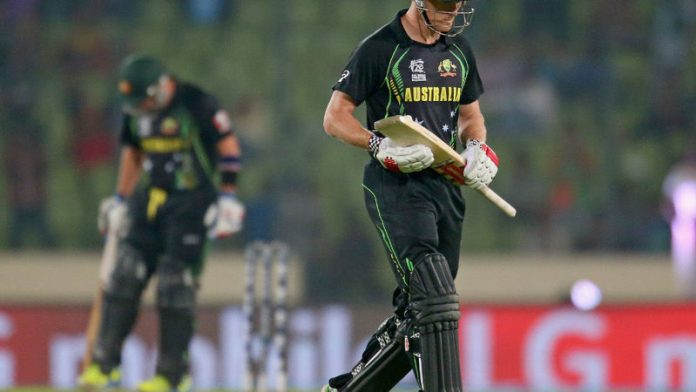 Australia's cricket captain George Bailey arrived in Bangladesh with an abundance of intimidating power hitters at his disposal in the cricket powerhouse's quest to land the only major trophy to have eluded them.

Yet just 10 days since the main group phase of the ICC World Twenty20 began, the pre-tournament favourites find themselves already eliminated and in the winless company of the hosts and the Netherlands.

Narrow defeats to Pakistan and the West Indies meant they were no longer the masters of their destiny in the pursuit of a semifinal berth, and the miracle of a Bangladesh victory against the former to keep them alive on Sunday failed to materialise.

The Australians further embarrassed themselves later on Sunday, getting dismissed for 86 runs in a 73-run hiding from India as their glorious summer of test cricket, made memorable by their Ashes win and series victory in South Africa, fizzled out in Bangladesh.

"It's been a long summer, a neverending summer, but it certainly doesn't mean we should have taken the foot off the pedal," all-rounder Shane Watson said after the plastering from India.

"Playing cricket for your country in a World Cup for whatever format of the game it is, it's a huge honour. There's certainly going to be a lot of people with damaged pride, especially after tonight."

Batting woes
Watson's struggle with the bat – seven runs from three matches – epitomises the misery of Australia's top six, whose strike rates in the range of 134-165 (per 100 balls) are enough to give most bowling attacks sleepless nights.

"As a team we don't like losing and I don't like my performance in the tournament … my performance was certainly nowhere near where I was hoping for," said Watson, refusing to blame the squad's significant workload for their early exit.

"This is a tournament we've been really excited about in the last couple of years," said the 32-year-old, who has played in all five of Australia's unsuccessful World Twenty20 campaigns.

"We lost in a semifinal in Sri Lanka [in 2012]. With the team we have, I was really excited at the better prospects [this time]," he said.

"We've not been able to execute really in those first couple of games, when it's integral to get off to a great start.

"I know everyone coming here was extremely excited about being involved in this team. We got a lot of match winners in our team from bat and ball, but we just haven't been able to put it together unfortunately."

Sloppy fielding
Australia were uncharacteristically sloppy in the field too, dropping catches that highlighted their road-weariness, while death bowling remained a major issue.

Indian slow bowlers claimed seven of their 10 wickets to once again expose the team's frailties against spin, a trait that was evident in Australia's tournament opener against Pakistan.

The series of rash strokes they played against India suggested they wanted to head home sooner rather than later.

Bailey, himself a culprit of throwing away his wicket, agreed there was no plan B once their one-dimensional aggressive approach fell apart.

"I certainly don't think that out batters can hold their heads particularly high in terms of their shot selection, match awareness, game sense … all the stuff that we spoke about our last game that we weren't particularly happy with," said the Australia captain, who was "embarrassed" by his own performance.

"We asked for improvement and we certainly did not have that … I'm disappointed with the way we batted, we all could've made better decisions and done things differently if we had our chance again."

Australia finish their campaign hoping to sign off on a winning note in Tuesday's Group Two match against hosts Bangladesh. – Reuters