Sri Lanka: Living in fear of the ‘white vans’ 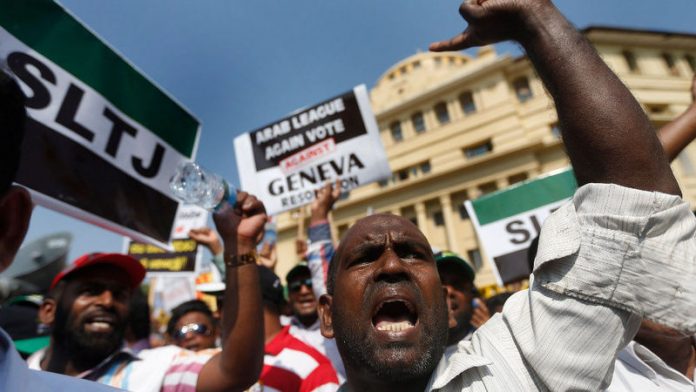 The arrest on terrorism charges this week of two well-known human rights activists in Sri Lanka has sent ripples of fear through those who work for justice on the island, even though the two men were subsequently released. It was the timing, happening just days before the United Nations Human Rights Council votes on whether or not to hold Sri Lanka accountable for grave violations of international law during the final phase of the conflict in 2008-2009. An investigative mechanism under the office of the High Commissioner is envisaged in the current draft of the Resolution, which was tabled for voting on March 26.

Many fear the latest arrests herald a new wave of intimidation and retaliation to deter witnesses from giving evidence to the new investigative mechanism. But the truth is we seldom hear what goes on in the dark heart of that island. There's already a campaign of revenge and intimidation under way – targeting low-level former rebels, their supporters and some Tamils who just speak out about war crimes and human rights abuses.

I know this because I've analysed detailed testimony from 40 survivors of recent sexual torture at the hands of the Sri Lankan military for a forthcoming report, An Unfinished War: Torture and Sexual Violence in Sri Lanka, written with the Bar Human Rights Committee, England and Wales.

This testimony is from young men and women who survived the horrors of the war, only to be abducted in Sri Lanka's notorious "white vans", tortured, raped and subjected to sexual violence. A quarter of those we interviewed had been abducted more than once; after the first incident they assumed wrongly that it wouldn't happen again. Almost half had tried to kill themselves after leaving the country. They would weep, shake physically and even rush to the bathroom to vomit as they recounted their ordeal over several days. The process also left its mark on the lawyers who took the statements, who said it was some of the most upsetting but fulfilling work they'd done.

Lessons for the future
In the course of taking the statements we learnt a lot about the risks that witnesses from Sri Lanka face and there are lessons here for any international investigation in the future.

Everyone we interviewed survived because their families managed to track them down and pay a bribe to the security forces. Many left the country illegally and almost immediately, still bruised and traumatised, without even seeing their spouses or parents. It was simply too dangerous. Even now many have lost touch because it's too risky to ring home; they know their calls are being intercepted. They are lonely and they need their families more than ever but don't dare to be in contact.

In several cases, a sibling or parent had been beaten, arrested or abducted, "disappeared" or murdered in retaliation for the escape abroad of one of our witnesses. Sometimes it's because the person abroad had given a media interview or taken part in an anti-government protest, unwittingly endangering their family in Sri Lanka. The abduction of a family member is one of the common triggers for the suicide attempts by survivors abroad.

Sophisticated recognition software
All the indications are that the Sri Lankan government now has sophisticated facial recognition software for identifying those of interest. They also have an extensive database now of Tamils from the former conflict areas to which they can match photos. Every survivor of the war was photographed, their personal details recorded in the giant internment camp in 2009. We now know that it's standard operating procedure for the security forces to photograph and fingerprint all those they abduct illegally in "white vans". This includes often photographing their bodies for scars from the war or previous torture sessions.

The security forces have many former rebels turned informer; several witnesses describe being turned in by hooded informers who nod when they recognise someone. Others describe turning informer themselves and identifying innocent strangers to survive themselves.

What's surprising is how many Tamils assumed wrongly that it was safe to go home, years after the war. The typical story is they fled abroad on a student visa at the end of the war but then thought it safe to go back and visit ailing relatives. Some are picked up straight off an incoming international flight. In most cases it's a few days before the "white van" comes for them.

Yasmin Sooka is a former commissioner on the Truth and Reconciliation Commission and was responsible for the final report. In 2004 she was appointed by the United Nations to the Sierra Leone TRC and in 2010 was appointed by UN secretary general Ban Ki-moon to a panel of experts to advise him on the conflict in Sri Lanka. She is the present executive director of the Foundation for Human Rights in South Africa.