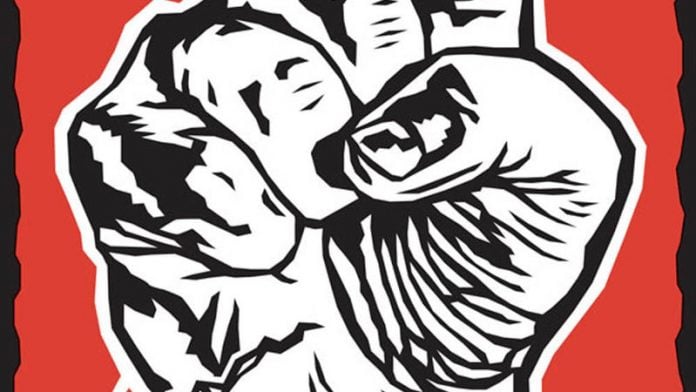 My friends argue that Jared Sacks's recent rejoinder to Andile Mngxitama's piece "How Malema became Mao'lema" should not be dignified with a reply; it would give him legitimacy as a worthy contributor to the progressive agenda of black liberation. To some extent, I agree. Who is Sacks, after all? But at the same time, I disagree. The hostility towards the black radical agenda has not changed since the early encounter between the blacks and whites. Though it might be easy to ridicule the likes of Sacks, he nevertheless represents those vile missionaries and the white left – sons and daughters of colonialists – long rejected by Maqoma, Bambatha, Anton Lembede, Robert Sobukwe and Steve Biko. His distortions are consistent and compatible with the historical white left's hegemony – "they kick us and tell us how to respond to the kick".

Not so long ago, Sacks, who today quotes Frantz Fanon, wrote a piece of opprobrium against Mamphela Ramphele, inserting himself into the tradition of black consciousness. This showed Sacks's ignorance or oblivion of the scathing criticism of his kind by Biko. He could desecrate and appropriate Biko at the same time, making no distinction.

Now Sacks is at it again, labouring on another contamination. But it is not a surprise: Sacks merely reproduces what has become an active industry of pollution of the black agenda by the white left since time immemorial. Fanon and Biko have been selectively appropriated – what others have called "a death by memory" – often mute against white supremacy. It remains interesting, though, how for example Fanon's conclusion in Black Skins, White Masks and the famous chapter "Pitfalls of National Consciousness" in The Wretched of the Earth have been peculiarly topical reference points in the white left, used to re-launch the historic anti-black agenda.

Today, not only does Sacks misread Mngxitama's piece but also misconstrues Fanon. He begins his mumbo jumbo by first distorting Alain Badiou's concluding remarks in his chapter on the cultural revolution in his little red book, The Communist Hypothesis. Badiou, Sacks says, rejected the party model and even the notion of the leader. The self-declared Maoist, with no qualms in referring to Hegel, Lenin, Mao and even Jacques Lacan and Louis Althusser as his "masters", is turned into a common anarchist by Sacks's jaundiced lens.

Sacks one-sidedly and uncritically adopts Badiou's criticism of the party-model but omits many other complications that Badiou raises regarding the cultural revolution. Interestingly, Badiou writes that anarchism "has never been anything else than the vain critique, or the double, or the shadow, of the communist parties, just as the black flag is only the double or the shadow of the red flag" – a line continuing from Sacks's quote from Badiou.

Though Badiou's notion of "subtraction" is not really compatible with Fanon's criticism of the party of national liberation, there are similarities. Badiou's theory of subtraction attempts to warn not only against the appropriative impulse of capitalism (its use in democracy, elections etc.), but it also warns against the intramural failures within liberation politics. Similarly, Fanon's labour on the party should not be read as a blind tantrum but must be consistent with his critique of eurocentrism and the neocolonialist bourgeoisie. This prerequisite background eludes Sacks's selective and opportunistic toiling. In fact Fanon, in all his work, is at pains to contextualise his critical labour. He argues that in the postcolonial moment, the party becomes a bourgeois administrative tool that not only safeguards the status quo, but also has consequently relinquished its historical task.

The leader, who had served in the rank and file of the liberation movement, has become sterile, a bureaucratic animal always at the mercy of imperial forces and the national bourgeoisie. Yes, he is critical of what "the leader" or the party becomes post-independence, but Fanon – much like Mngxitama, Badiou and Slavoj Žižek – is not seduced by the triviality of a leaderless or even spontaneous struggle. Žižek has already noted that even anarchists have their "secret master". In fact, Fanon's cry is for a thinking intellectual class, as opposed to that sucked into "stupidity". Fanon writes; "For it is the rank-and-file who are fighting in Algeria, and the rank-and-file know well that without their daily struggle, hard and heroic as it is, the summit would collapse; and in the same way those at the bottom know that without a head and without leadership the base would split apart in incoherence and anarchy."

Actually Sacks must distinguish between Fanon's critique of neo-colonialist thug and the organised revolutionary leadership. Secondly, he must not turn Fanon into someone who thoughtlessly valourises the masses – like the white left has patronisingly turned "the poor" into pristine subjects of history. But Fanon's, as is for Badiou, Žižek and Mngxitama, acceptance of leadership does not promote the idea that the masses are a cluster of unthinking fools. Mngxitama clearly writes that it "does not mean that the leader knows everything, or that the followers are unthinking sheep, but it's a realisation that to achieve the collective desire for liberation, there is a need for a unifying symbol".

But Sacks darts past this point. He erases his interlocutor's argument, only to calibrate his ill thought and hasty rejoinder. Similarly, he turns to Mngxitama's Why Biko Would Not Vote, a text published from New Frank Talk. Here, again, Sacks comes out with the most outrageous assessment as he has done on both Fanon and Badiou. For those who have read Mngxitama's text, the confusion is Sacks's. Mngxitama's piece doesn't argue against voting as such but argues that the current political parties, despite the ritual of opposition, are nevertheless ideologically agreeable to one another.

It seems to me that Sacks is not interested in any meaningful contestation of ideas, but distortions for the sole purpose of stabilising the anti-black project. He chops and combines out of desperation different contexts and unashamedly dishes out a deurmekaar goulash. It is anguishing that this has gained traction, let alone being standardised as thought. Those who now deem that black politics have become an industry to the white left, aren't too wrong – Sacks and many others are the new breed of colonial dealers. Like proper colonialists they chop and choose, distort and destroy every potential seed of black emancipatory possibility. And as the house of fervent rebellious spirits burns down, they watch on the touchlines congratulating each other with implied glee, as each comes with an account of how great they were in giving darkies support in the memorable past.

Athi Mongezeleli Joja is an art critic, a member of the arts collective Gugulective and part of the editorial collective of the New Frank Talk

In the interest of fairness, Soapbox is a regular feature on the M&G website, which allows all political parties, regardless of standing and size, to express their views on policy and governance in the run-up to the 2014 elections on May 7. To have your views published, send an email to [email protected] with 'Soapbox' in the subject line.