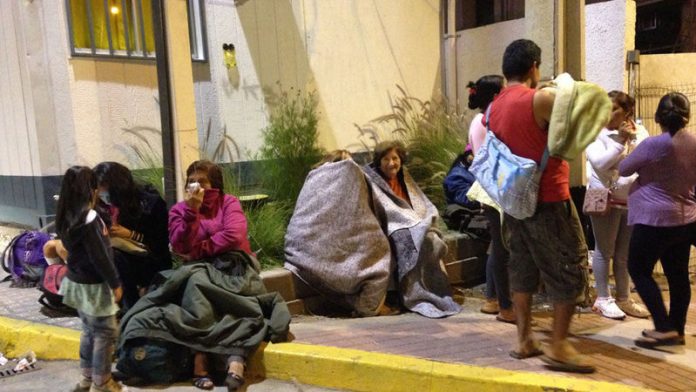 A major earthquake of magnitude 8.2 struck off the coast of Chile on Tuesday, triggering a tsunami, causing landslides that blocked highways and leading to five deaths.

Officials said the dead included people who were crushed by collapsing walls or were killed by heart attacks.

The US Geological Survey said the quake was shallow at 20.1km below the seabed and struck about 100km north-west of the mining port of Iquique near the Peruvian border.

The government said it had no reports of significant damage to coastal areas, but around 300 prisoners took advantage of the confusion and escaped from a female penitentiary in Iquique, Interior Minister Rodrigo Penailillo said.

About 16 of the women were soon recaptured, Chile's investigative police said, while security forces fanned out through the area amid reports of power outages.

The Pacific Tsunami Warning Centre said the quake generated a large tsunami with the biggest wave reported at 2.3m. The Chilean navy said the first big wave hit the coast within 45 minutes.

Evacuation
Iquique is a key copper exporting port, close to Chile's main copper mines. The area has been on high alert in recent weeks after an unusual number of tremors.

The government evacuated Chile's northern coast and a tsunami warning was issued for the Pacific coast of Mexico through Central and South America.

Chile is the world's number one copper producer but key mining firms said there was no serious damage to their operations. The tsunami alert in the country would however go on for at least another six hours, the government said late on Tuesday.

In 2010, an 8.8-magnitude quake triggered a tsunami that devastated several coastal towns in central-south Chile, a disaster that killed 526 people.

State-owned miner Codelco reported no harm to its workers or mines, and said its operations in northern Chile were normal.

'A destructive tsunami'
Chile's Collahuasi copper mine and port had no immediate problems following the quake, chief executive Jorge Gomez told Reuters, and mining company BHP Billiton said it had not received reports of damage.

"An earthquake of this size has the potential to generate a destructive tsunami that can strike coastlines near the epicentre within minutes and more distant coastlines within hours," the Pacific Tsunami Warning Centre said.

"An evaluation of the Pacific wide tsunami threat is underway and there is a possibility that Hawaii could be elevated to a watch or warning status," it added.

Authorities in Peru started evacuating communities in the southern coastal region of Ica. Electricity was partially lost in the Peruvian cities of Tacna, Moquegua and Arequipa but there were no reports of deaths or serious damage there. – Reuters