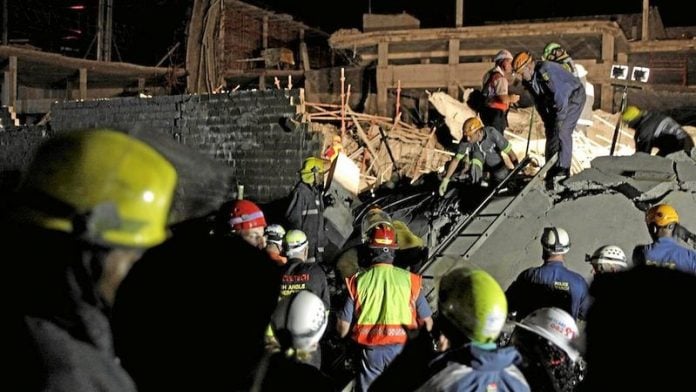 A commission of inquiry on Wednesday into the collapse of part of the Tongaat mall during its construction on November 19 last year revealed that steel bars needed to reinforce a beam holding a concrete slab were missing.

Sipho Mbuyisa, whose company Mbuyisa Steel Fixing Services CC was responsible for all the steel required in the construction, testified that his team had fitted 19 steel bars in the beam.

This had been done in accordance with the engineer's plans.

The inquiry is headed by the labour department's occupational health and safety manager Phumudzo Maphaha.

Maphaha asked Mbuyisa: "What if I told you that there were only seven Y32 bars?" Mbuyisa replied: "I would be shocked sir.

I would not know where those [12] beams went." Maphaha's commission is investigating the collapse.

He is being helped by co-presiding officers Sandile Kubheka and Lennie Samuel, a forensic investigator and organiser.

Recommendations
The commission is expected to prepare a report of its findings and formulate recommendations to be presented to the labour minister and the National Prosecuting Authority for consideration.

On March 10, the commission along with engineers, conducted a site visit to the mall that was being constructed by Gralio Precast.

The commission previously heard from site foreman Ronnie Pillay that a concrete slab sagged by 7cm in the days leading up to the collapse.

Permission to build the mall was never obtained and the eThekwini municipality had obtained a court order stopping the development.

However, building continued and the mall was scheduled to open in March this year. – Sapa

TB Joshua’s church: Built, like others, on shifting sands

Smiles and prayers as Nigerians U-turn on co-operation