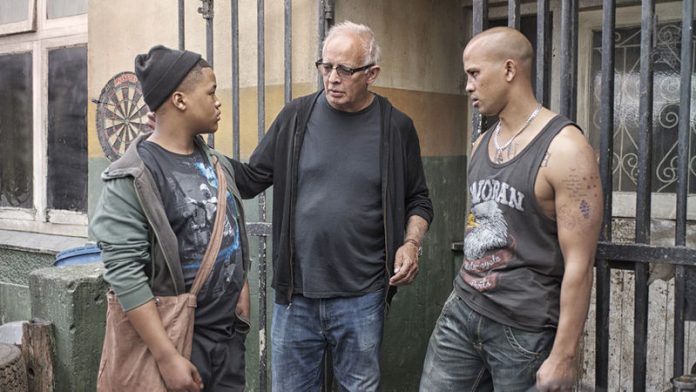 Ian Gabriel's Four Corners is beautifully photographed by Vicci Turpin. The attention to the details of the Cape Flats, the way the camera occasionally ever so slightly pauses on a doorway, a rooftop, an out of focus figure in the crumbling streets of the ghetto, coupled with the perfect capturing of the grey light that hangs in those grim streets, away from the sunshine, the mountain in the unattainable distance that lends an authenticity to a script so sadly littered with tropes: the ex-con trying to make good and having to do one more job; the woman who returns from overseas; the boy who has to choose between chess or being a gangster; the serial killer that stalks the ghetto preying on young children.

That the film is largely in Sabela (the once secret prison language of the numbers gangs) and that a large majority of the bit parts and extras are non-professional performers, further lends to the very realness of the project. Of an early, and viscerally captured prison mess hall fight scene, Gabriel says, "everyone was an ex-prisoner or an ex-gangster or an ex-addict or a continuing addict".

It is the intersection of these elements, the authentic and the regurgitated tropes, which make Four Corners a success as a product, and not as a great film. It is the very lack of aspiration to some kind of high art, while rooting itself in authenticity, coupled with the films success as a product (that is – people are watching it), that makes Gabriel's film feel like a ray of light through the clouds of Hartiwood Film-formula filcks and the continued good fortune of Leon Schuster.

Before Four Corners premiered last week, it had appeared on the streets in pirated form and then as a torrent, which was widely downloaded. Gabriel is incredibly philosophical about this, "I think the way people think now – digitally – they don't see it as piracy, they see it as sharing. We will definitely not get as many people to the cinemas as we would have if the film were not pirated. At the same time, there are people who have seen the film who would never have got to the cinema.

Ian Gabriel on the set of Four Corners. (Supplied)

"A lot of the Facebook and Twitter talk, is largely from people who have already viewed the pirated copies. We are pushing 'better on the big screen' to counter the piracy, but we are yet to know if we will get the same audience into the cinema."

Bridge between two worlds
After the weekend's release on 20 screens nationwide, Helen Kuhn of Indigenous, the film's distributor, said that with the figures they had so far, "Four Corners is on 92% of the per print high estimate for its opening weekend, and will be very close to 100% [when the other figures come in]."

Performances such as Brendan Daniels as Farakhan, the man returning to society from prison with a quest to find his son, Jezriel Skei as Ricardo, the young boy literally being forced to choose between chess or killing, are even-handed and completely believable within the world of Four Corners. Irshaad Ally as the Americans gang member Gasant trying to recruit Ricardo, however, overplays his hand to the point of caricature. Daniels, in particular, has crafted a shifting embodiment of a man trying to cross a bridge between two worlds; straight backed and upright on his leaving prison, he devolves into the slouch of the condemned.

It's these kinds of details that lift Four Corners way above the recent attempts of South African cinema (and particularly the National Film and Video Foundation [NFVF]-?funded films) to find a popular audience in the fairly lucrative crime-and-redemption audience. And while the film can be said to end on a redemptive note, the hope is tempered by the very real acknowledgement that the Flats will not be transformed by single narratives, that it will remain cold and indifferent, and the mountain, the symbol of affluent tourist Cape Town, will still hover in the distance above the RDP houses, the shacks, the mist from the vlei, always just out of reach.

Four Corners fails as great cinema, mostly from the pressure it puts upon itself to tell so many stories: the doctor who returns from "the overseas" to pack up her father's house, only to become a love interest, and the (perhaps Station Strangler-inspired) serial killer who is slowly picking off young children and burying them in the dunes in some kind of quasi-Se7en fashion, only serve to take away valuable screen time from the more engaging story: a father trying to restore the house his father lived in to its former glory and trying to leave the numbers gangs behind while his son is being faced with similar quandaries. The performances in the secondary stories are uneven, almost as if the actors understand the superfluous nature of their contributions, acting as it were for the cutting room floor.

'The female story'
"I always knew I wanted to tell several threads," Gabriel says. "The reason why I wanted to do that was to keep the story small actually and not make this grand story. We thought by weaving the stories that we'd be able to avoid some of the pitfalls of telling a big story. And originally, the stories didn't include the female story. The female story came in last of all. I was quite cautious of it being a love interest story. It took quite a long time to become that, but what it was, was a woman's story and deliberately a story about an outsider coming back because the threads were getting really hard and very harsh and very masculine."

The surprising thing about Four Corners is the distinct lack of a condescending third act. The stories themselves may be constructed of threadbare tropes, but Gabriel and scriptwriter Hofmeyr Scholtz manage to build to a conclusion that is satisfyingly un-patronising toward it's audience. Funded partially by the NFVF and developed before the recent changing of the guard, which some say has resulted in an environment more open to different narrative approaches than before.

Four Corners is uneven in places, far from perfect in its structure and reliant on recognisable tropes of Western cinema. Yet somehow transforming these well-worn narratives into a mostly authentic experience of the Cape Flats through cinematic detail, superb casting of background characters and, for the most part, believable performances, Four Corners is exactly the kind of film South African cinema needs to grow audience that pay for local mainstream products. Only once this has happened, will there be investor interest in taking risks on more challenging products. Four Corners could be an indication that the film development sector finally seems to be getting its priorities in order; audience comes from authenticity, which comes from trusting the filmmakers.

In essence, the real story being told in Four Corners is about the inner life of the Flats, rather than the individuals story threads, and perhaps this is the truest reflection in the film. Four Corners is similar to Riaan Hendricks's Devils Lair, in that it shows this, but offers no real solutions, no patronising attempts to tack on false hope to the larger problem. It is, in the end, a competent action drama about gang violence in the Cape Flats, that is respectful of the reality it is attempting to portray, and in doing so indicates that the evolution away from the imposed Hollywood template is well under way.