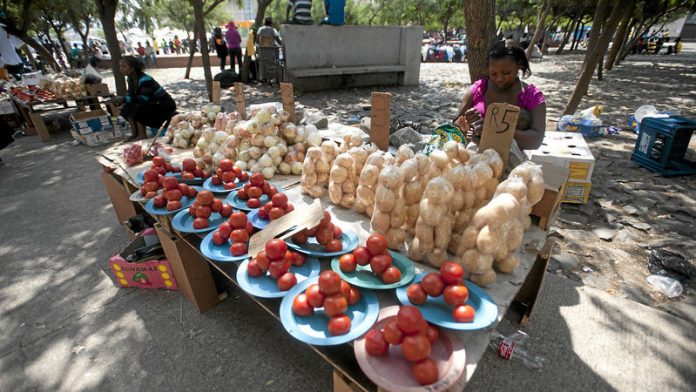 Doreen Joubert sits at her Mega Pawn shop and complains that a 10-week wage strike in the world's biggest platinum-mining industry is crippling business in the South African city of Rustenburg. She's taken up bead work to pass the time.

"Everyone's pawning, but nobody is fetching," said Joubert (43), in front of a shelf of motorcycle helmets she's selling in the shop she co-owns with her husband, Vagely. It's not only the miners feeling the pinch. "One-man businesses are selling their power tools" because there's no work, she said.

Wage negotiations between Anglo American Platinum, known as Amplats, Impala Platinum Holdings and Lonmin Plc and more than 70 000 members of the striking Association of Mineworkers and Construction Union (Amcu) have restarted after ceasing through most of March. The companies estimate employees have lost about R5-billion in pay so far.

Platinum mining, which started in the 1920s, boosted the Rustenburg economy to the point where the town became one of South Africa's fastest-growing cities by 2000. During the 2010 World Cup, England's national soccer team was based near the town, about 115 kilometres west of the capital, Pretoria.

Lucky Ramoroa remembers how business at his Lucky Pub, across from the Royal Bafokeng Stadium, swelled during the England World Cup match against the US that ended in a 1-1 tie.

'Spillover effect'
"It was good and it was still good until the strikes started," he said in a phone interview. Since workers walked off the job, sales have fallen 45%.

As the platinum industry goes, so goes Rustenburg, a city of 500 000 people where mining-related activities account for about half the jobs and 60% of the economy, said Thapelo Matebesi, the spokesperson for the local municipality.

The strike has hurt businesses from the "tuck shops" that sell matches and cigarettes to bigger business owners and contractors that could default on commercial loans, he said. "The strike has got a spillover effect in that way."

The municipality is also seeing less demand for its pre-paid electricity packages and is facing the threat of non-payment of garbage removal fees, he said.

Properties repossessed
"All our members, they're really tightening up their belts over this difficult time," said Sydwell Dokolwana, the National Union of Mineworkers's regional secretary in Rustenburg. "We have seen many people losing their cars, banks repossessing properties, vehicles and houses. There's no food. The level of crime is now picking up."

Even before the strike started on January 23, the town started feeling the effects of the looming labour action as tensions between the mineworkers and the companies deepened.

"In December, we weren't busy as usual because people knew what was coming," said Wolfgang Kruis, assistant manager at the Ultra Liquors store. "I would rather buy food than liquor too."

The shop's sales are down by 30% to 40% and people have switched to cheaper liquor brands along with the wholesale business largely declining because "taverns are scared to sell until the strike is over", according to Kruis. The small shops and bars fear they will become targets of robbers if they maintain their normal stock levels, he said.

Violence worsens
The strike has also worsened violence in the area. An Amcu official was killed in clashes with police and two others were arrested for the attempted murder of an Amplats worker in April. A winch operator on his way to the company's Union mine was attacked March 3, according to a statement by the National Union of Mineworkers.

Producers and the Amcu haven't made new concessions during separate talks with the state's Commission for Conciliation, Mediation and Arbitration (CCMA) during the past week, Impala spokesperson Johan Theron said on Tuesday.

"It is of course possible that producers looking to divest from high-cost, low-productivity Rustenburg mines will be in a better position to do so the longer the strike goes on," Mark Rosenberg, an Africa analyst at New York-based Eurasia Group, said in a note on Tuesday. There's a 35% chance that the strike will last until May, he said.

"We heard rumours last year that there was going to be a long strike, but not this long," said Morne Fourie, a salesperson at the Motor World used car dealership, as he sat at his desk under the head of a stuffed warthog mounted on the wall. "Before we would move 30 cars a month; we're lucky if we get seven out now."

Banks are less willing to extend credit to mineworkers as the strike goes on, he said.

"It's difficult for them to get approved if they work for the mine," said Fourie, whose wife is pregnant with their second child. He now works longer hours and public holidays at the lot. "Hopefully I can sell one or two more cars." – Bloomberg