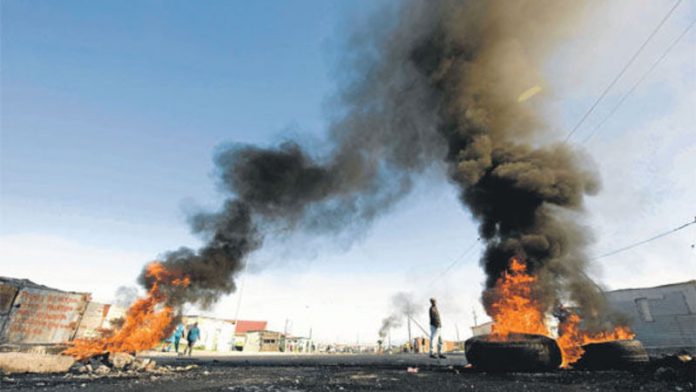 The ANC on Tuesday called for calm in Boitumelong near Bloemhof after six houses were burnt during a violent protest.

"The ANC condemns [such] acts of provocation, intimidation, public violence and criminality by some of the protesters," North West provincial secretary Dakota Legoete said. "While the public has the constitutional right to protest, these very rights do not imply that people must be violent, destroy private and public property, attack police and intimidate others."

Residents went on a rampage demanding the resignation of the mayor and councillors, whom they reportedly accused of nepotism and failing to deliver basic services.

"We [therefore] urge the community of Boitumelong to act in accordance with the law because the South African law applies without impunity," said Legoete. "Public violence cannot be an alternative to address the needs of our communities but can only reverse progress on services already done, thereby reverse community development. Negotiations remain the only solution when disenchantment reigns."

Meeting residents
Legoete urged the provincial government to urgently convene a meeting with the residents of Boitumelong in an effort to restore stability in the area and to agree on a plan to resolve the impasse.

The provincial ANC executive committee was expected to meet residents at 4pm on Tuesday.

North West police said almost 100 people had been arrested since the protests began on Wednesday.

"They have all been charged with public unrest and malicious damage to property," said Brigadier Thulani Ngubane.

Sixteen of those arrested appeared in the Bloemhof Magistrate's Court on Monday. The matter was postponed to Friday when they were expected to apply for bail.

"The situation is volatile and the police are closely monitoring the situation, and will continue effecting arrests on those who are breaking the law," said Ngubane.

"We wish to condemn in the strongest terms possible the destruction of private and public property, looting of several tuck-shops as it undermines the right to peaceful protest," he said in a statement.

He said violence was not a solution for residents when they were unhappy about service delivery. "When communities do not get any joy from local engagements, they should escalate their dissatisfaction to the provincial government for intervention instead of opting for unlawful violent protests."

The provincial government was studying reports from officials who were sent to the area to meet with the municipality and affected communities. – Sapa