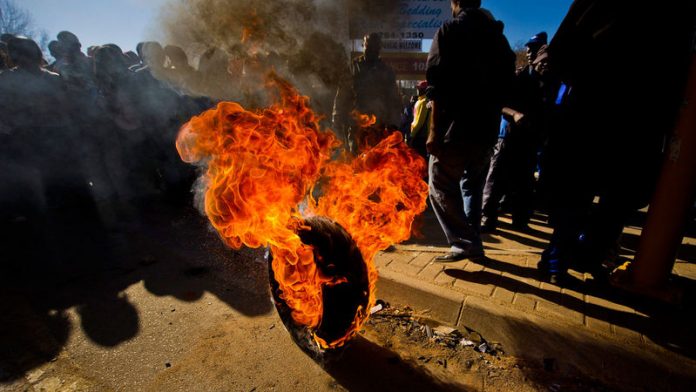 The situation in Boitumelong was tense as protest action intensified in the area, the office of the North West premier said on Thursday.

"It is very tense in the area but we hope the situation will be conducive when the premier visits the area later this afternoon," Premier Thandi Modise's spokesperson Lesiba Kgwele said.

Modise is scheduled to meet with residents and visit the family of the Christiana teenager who was shot dead at a tavern on Wednesday. He was allegedly part of a mob looting shops while protests were underway in the town. When the group arrived at a tavern, its owner fired shots at them, killing the boy and wounding two other people.

Kgwele appealed for calm in the area. "We don't want heightened racial tensions. We are appealing for calm and to allow for the law to take its course," he said.

By Tuesday, the protest had spilled over to Coverdale in Christiana where a community hall was torched. Journalists were also not spared the anger of residents. Their cars were attacked and stoned.

"At the moment residents have blocked roads in Boitumelong and we can't enter the township. There is a police nyala patrolling the streets," said one journalist at the time. Police spokesperson Brigadier Thulani Ngubane said police were monitoring the situation but no acts of violence were reported.

Task team
Meanwhile, the premier formed a provincial executive council task team that would meet with Boitumelong and Itsoseng protesters, her office said on Wednesday.

Kgwele said that on Wednesday, the council took a decision to appoint an independent firm to conduct a forensic investigation into allegations of nepotism and corruption. The allegations were raised by residents of Boitumelong, near Bloemhof in the Lekwa Teemane local municipality.

Modise said service delivery issues were not raised in the memorandum that was submitted by the protesters from Buitumelong. "We are committed to get to the bottom of the allegations raised in the interest of good governance."

Schooling was disrupted and residents could not go to work because all the roads were blocked in the area. "We don't know what the protest was about because we have not received a memorandum," he said. A community hall was also burned in Christiana near Buitumelong on Wednesday.

On Monday, six houses and a community hall were torched during protests in the area.

Protesters disrupted schools, barricaded the N12 with burning tyres, pelted police with stones and petrol bombed a nyala. Two police officers were injured and taken to hospital. A police officer lost his finger in the process. Protesters were demanding the resignation of the mayor and some councillors, accusing them of nepotism and failing to deliver basic services.

"Destruction of properties is a drawback for which there will be consequences for those orchestrating and participating in these acts that undermine the rule of law," she said.

The Police and Prisons Civil Rights Union also condemned the violent protests in North West. The public needed to be reminded the right to protest came with responsibility, said spokesperson Theto Mahlakoana in a statement. "It is disturbing that protesting community members vandalise public facilities, which are meant to provide them with services and later blame government for lack of service delivery," said Mahlakoana.

Mahlakoana said the union was willing to work with the communities to ensure that their issues were addressed through proper channels. "However, we cannot sit back when public facilities are destroyed and the lives [of] our members are exposed to dangers posed by unruly protesters." – Sapa

The legislature will suspend its business indefinitely from Wednesday, after a final sitting to pass two pieces of critical legislation to keep the wheels of government turning
Read more
Politics