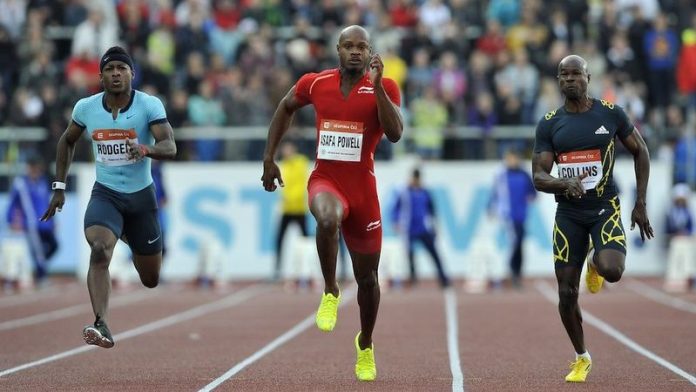 Former 100m world record-holder Asafa Powell was handed an 18-month suspension on Thursday for his positive test for a banned stimulant.

Powell and training partner Sherone Simpson tested positive for oxilofrine after the 100m finals at the Jamaican national championships on June 21, 2013.

"This ruling is not only unfair, it is patently unjust. Panels such as these, I understood, were assembled to allow athletes who, consciously or unconsciously come into conflict with the rules of sport, a chance at equitable redemption," Powell said in a statement posted on his website. "Unfortunately, this was not the case."

Powell's lawyer had already vowed to appeal the decision handed down by a three-member panel of the Jamaica Anti-Doping Commission Disciplinary Panel, which unanimously ruled that Powell, who blamed his positive result for a banned stimulant on a nutritional supplement, was negligent. Panel chairman Lennox Gayle announced the suspension, which is due to end on December 20 of this year.

Negligent
"Having reviewed and listened, and bisected all evidence in this matter, and reading the submissions of both councils, the panel arrived at a unanimous decision and it is a decision that Mr. Powell was found to be negligent and that he was at fault, especially since he is an elite athlete, so the period of ineligibility will be 18 months, starting from the date of the positive test," Gayle said.

In a quick response, Powell's lawyer Kwame Gordon said the athlete would appeal. "We are disappointed at the verdict and will be taking it to the next level," he said.

JADCO lawyer Lackston Robinson had argued in February that Powell should be banned a minimum of two years, telling Gayle, Peter Prendergast and Dr. Japheth Ford that the sprinter was "guilty of gross negligence".

Powell, who set a world record in the 100 metres in 2008 with a time of 9.74 seconds, blamed Canadian physical therapist Chris Xuereb for the positive test, saying he provided the nutritional supplement, Epiphany D1, that resulted in the positive test.

Robinson argued that Powell's trust of Xuereb, whom he had known for less than two months was "gross negligence" and cited discrepancies in testimony by Powell, Simpson and their manager, Paul Doyle.

A bottle of Epiphany D1 submitted for testing to a US lab by Doyle showed traces of oxilofrine while one bought by the lab from the Epiphany D1 website did not test positive for the same substance.

"The evidence presented in the case was quite lengthy and detailed, and I must say, the defense team of Mr Powell did some real hard work in presenting the type of evidence and material in its defense of its case," Gayle said. "The submission of JADCO was also very useful." – Sapa-AFP