No really, the EFF is well positioned to force positive change 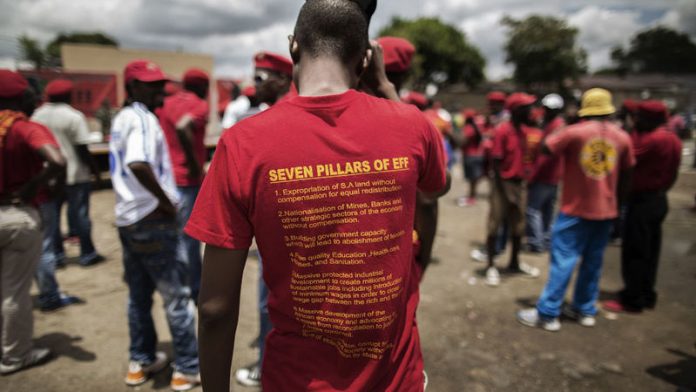 I’m not about to start doing my Woolworths dinner shopping in a red beret, nor am I yet comfortable calling my barman “fighter” when I have just purchased a R50 craft beer, but I’m still going to vote for the Economic Freedom Fighters come May 7.

Let me explain why.

I believe the ANC has the structures and legitimacy to govern South Africa. This comes from 20 years in government and 82 years of struggle. The Democratic Alliance (DA) might believe it has the capacity to rule but its legitimacy is in dispute.

Its election manifesto mentions apartheid 12 times, whereas the ANC’s manifesto only drops the A-bomb eight times. The DA is at pains to tell how its members opposed that system of institutionalised exploitation, and today it is still determined to redress the “economic legacy of apartheid” by growing the economy and creating jobs.

I’m inclined to place South Africa’s struggle in the context of the ongoing global class wars between heinously affluent, yacht-owning, car-collecting industrialist-financiers and the rest of us.

It’s the very economic system itself that’s responsible for the exploitation of workers – capitalism. Apartheid was the implementation method used here for 45-odd years. After that fell, the capitalist mavens co-opted some liberators and changed their system of wealth extraction to market fundamentalism, deregulation, black economic empowerment, trickle-down economics and the mantra of growth for job creation.

In 2008, 48% of South Africans lived below the poverty line of R524 a month. Trickle-down economics hasn’t worked.

I believe the only way to ensure a humane, worker-friendly, pro-poor country is to have a government that creates it with laws. We need a strong, activist government prepared to make fundamental, progressive policies – yes, socialist ones – that put the rapacious exploitation of big business in check.

This means placing more of the country’s assets in the hands of the people, giving workers a reasonable living wage and a say in the way their company is run.

The party that has reopened the debate on economic transformation along these lines is the EFF. Its leaders have shown marketing genius and placed the economic system front and centre in the party-political debate.

The ANC will win the election by miles, and I wouldn’t have it any other way, but it needs to be aware of a groundswell of popular discontent with its market-friendly policies. These have led to massive poverty, corrupt self-enrichment by many of its leaders, an unforgivable massacre of 34 miners in Marikana – all to protect the interests of monopoly capital and the disintegrating tripartite alliance.

A vote for the EFF is a vote for a self-described “Marxist-Leninist-Fanonian organisation” that believes only a socialist transformation “will end the suffering of our people”.

The political spectrum has been bereft of a meaningful, independent left for decades. With the DA as official parliamentary opposition, the ANC’s main challenger has been a business-friendly party of the centre-right. No wonder the ANC’s manifesto also speaks of “inclusive growth and job creation”. The ANC is the party of the R30-billion arms deal, and other outrages perpetrated in the name of job creation.

But all is not lost. The ANC also purports to be braced for the second phase of the struggle, when it “implements radical socioeconomic transformation to meaningfully address poverty …” The manifesto is full of exciting plans for pro-poor projects – homes, 1 000 schools, three universities, 43 hospitals.

That is the kind of positive intervention that only a government can make. And if its main rival is perceived to be the stridently interventionist EFF, the ANC is more likely to make it.

So I say, vote EFF, and pull the ANC left. If the EFF can garner a significant slice of the vote, the ANC will be forced to take its sentiments seriously, and the ANC’s socialists will gain influence.

This is not to say the EFF is ready to govern. Some of their policy proposals read like a brainstorm that got out of hand when the beer arrived. (Let’s build some new cities!)

But the party expresses a profound, worldwide, popular dissatisfaction with the current economic system. It is a feeling manifesting in Greece, Spain, Egypt, Brazil and elsewhere. These protesters are asking for more than just a job, any job. Students want university admission, mothers want better healthcare, people want easier access to cities and the internet.

People want the government to redirect the obvious profits earned and stashed by a handful of industrialists and financiers and put them to work improving society. Only a government can do that.

The ANC will govern. But it needs to be encouraged to follow through on its pro-poor traditions. And I think my vote for the EFF will help to give it that encouragement.

Hagen Engler is the author of Marrying Black Girls for Guys Who Aren’t Black, published by Jacana

What we want: Ramaphosa to cough up a hairball, racists in hair shirts and consumer boycotts that don’t turn hairy
Read more
Politics