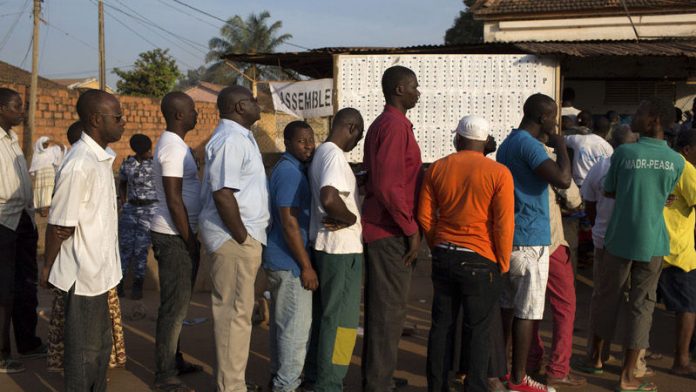 Voters in Guinea-Bissau began casting their ballots on Sunday to elect a new president and lawmakers in an election meant to draw a line under a 2012 military coup that plunged the West African nation into chaos.

The frontrunner in a field of 13 for the presidency is Jose Mario Vaz, the former finance minister and candidate of the dominant African Party for the Independence of Guinea and Cape Verde (PAIGC).

Most of the presidential candidates come from a new generation of politicians. Chief among these is Paulo Gomes, a former World Bank executive and Harvard graduate who is seen as the strongest challenger to Vaz.

"I came in very early because I wanted to choose a leader who will be able to take Guinea-Bissau forward after all the problems we have had in the past years," said 21-year-old Gibrilo Cande, one of the first to vote after polls opened at 7am GMT.

A line of about 100 voters snaked into the street from an abandoned cinema which was turned into an open-air polling station for the day.

Nearly 800 000 voters, most of them young and voting for the first time, are expected to take part in the ballot which could usher in new leadership in the coup-prone nation that has been dubbed Africa's first "narco-state". Polls will close at 5pm GMT.

The former Portuguese colony is home to 1.6-million people and covers about 28 000 square kilometres. Weak state institutions and a labyrinthine coast of islands and unpoliced mangrove creeks have made it a paradise for smugglers of Latin American cocaine, mainly destined for Europe.

If no candidate wins an outright majority, a second round will be held between the top two candidates.

The country's last attempt at an election two years ago was aborted when soldiers under army chief Antonio Injai stormed the presidential palace days before a scheduled presidential run-off.

Twice delayed, Sunday's vote was organised after pressure on the transition government from the United Nations, the United States, the European Union and West African regional bloc Ecowas, which has been bankrolling the interim government.

"We are tired of military coups. Everybody is tired, we just want the country to get back to normal," said 77-year-old retired civil servant Alexandre Vierra.

The poll is seen as a last chance for Guinea-Bissau, as donors tire of turmoil in the impoverished nation. No elected president has completed a five-year term since a war of independence from Portugal ended in 1976.

About 80% of the country's population depends on cashew farming, which is the biggest cash earner. However, post-election stability could help attract investors to the country's untapped mineral resources, including bauxite, phosphate and offshore oil. Some 110-million euros in European Union aid, frozen after a 2011 military uprising, could be unblocked too.

"The atmosphere around the country is calm, we are not expecting any hitches," Jose Ramos-Horta, the former president of East Timor who is now UN Special Representative in Guinea-Bissau, told Reuters in the crumbling capital.

"In the last few days of campaigning, the tensions observed a few weeks ago have dissipated," he added.

Vaz's candidacy is clouded by accusations from Bissau's attorney general of suspected involvement in the embezzlement of a $12.5-million budget grant from Angola. Vaz denies wrongdoing.

The PAIGC party machinery makes it likely to win the parliamentary ballot but Vaz's victory is far from certain because of anger at traditional parties and a strong challenge from Gomes.

Another independent candidate, Nuno Gomes Nabian, the former chair of Bissau's civil aviation agency who comes from the Balanta ethnic group, has the support of the army.

"If we win, we will make sure that we respect the military, but we must also make sure that they respect us," Vaz told several thousand supporters at a rally on Friday. – Reuters