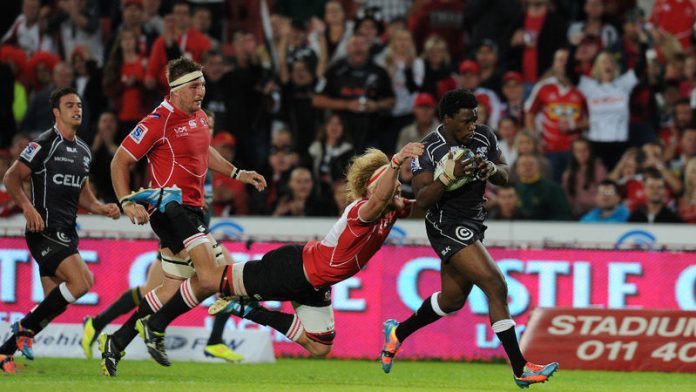 A superb individual try from fullback Lwazi Mvovo secured the Sharks a 25-12 victory over the Golden Lions to hold on to a two-point lead in the Southern Hemisphere provincial series.

The Brumbies hung on to defeat the Queensland Reds 23-20 in Brisbane after leading 20-3 at one stage to lead the Australian conference by three points from Western Force.

The Chiefs scrambled to an unconvincing 22-16 win over the Melbourne Rebels at Waikato Stadium for their first victory in four games.

Western Force made it five successive victories for the first time in their history with a rousing 28-16 win over the NSW Waratahs in Perth.

The Otago Highlanders recovered from a shaky start to beat South Africa's Northern Bulls 27-20 in Dunedin and climbed to sixth overall and second in the New Zealand conference behind the Chiefs.

The Auckland Blues, Wellington Hurricanes and Western Stormers all had byes this weekend.

In Johannesburg, Mvovo scored a superb chip-and-chase clinching try for the Sharks 13 minutes from time.

Centre S'bura Sithole forced a turnover near the touchline and Mvovo darted down the flank, caught his chip and zipped over to land a decisive blow against the Lions.

Francois Steyn converted and then added a penalty to get the Sharks home in a rugged South African derby at Ellis Park.

The Brumbies led 20-3 after 31 minutes in Brisbane but the Reds doggedly fought their way back in the second half, dominating territory and possession to get within three points with 11 minutes left.

But the Canberra-based outfit dug in and finished the Australian derby in Queensland's half as the clock wound down.

It was a bitter defeat for the Reds, who have now lost their last four games by five points or less.

After racing to a 19-0 lead in the opening 23 minutes, the Chiefs struggled for much of the remainder of their home match as the Rebels fought back to within a whisker of snatching an unlikely win.

There was only one try apiece, with victory ultimately determined by the goalkicking of Gareth Anscombe, who punished the Rebels with five penalties.

It was another outstanding defensive effort from the Force before their fans in Perth to grind down the Waratahs, who dominated possession.

Emerging hero winger Nick Cummins was the match winner for the Force as they clinched their first home match against the Waratahs, running in three tries.

The Waratahs were ruing the absence of star fullback Israel Folau, who was controversially ruled unfit to play by the Australian Rugby Union on the eve of the match.

The Highlanders overcame the Bulls in Dunedin as the South African team's poor form on the road continued.

The Bulls, coming off a loss to the Hurricanes last week, led 13-3 after half an hour but then conceded three straight tries, effectively putting the game out of reach.

The Crusaders completed their first clean sweep in South Africa since 2008 after comfortably overcoming the Lions in Johannesburg last weekend.

It was the first victory by the Crusaders over the Cheetahs since 2007 in the republic.

Victory lifted the Crusaders five places to seventh and into the hunt for a top-six finish and a play-off spot.

The Cheetahs have the worst defence of the 15 teams — conceding 303 points in eight matches — and remain second last. – AFP