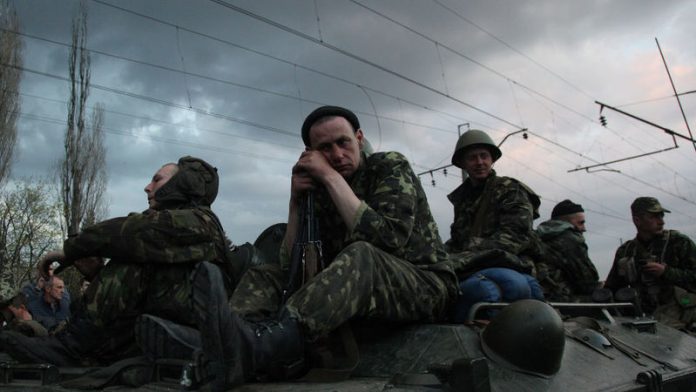 Leaders of gunmen who have taken over city halls and other sites in and around Donetsk this month in pursuit of demands for a Crimea-style referendum on union with Russia rejected the agreement struck in Geneva by Ukraine, Russia, the US and European Union and demanded on Friday that the leaders of the Kiev uprising must first quit their own government offices.

Moscow renewed its insistence that it had no control over the "little green men" who, as before Russia annexed Crimea last month, appeared in combat gear and with automatic weapons to seize public buildings – a denial that Western allies of those who overthrew the pro-Russian president in Kiev do not accept.

The White House renewed President Barack Obama's demands that the Kremlin use what Washington believes is its influence over the separatists to get them to vacate the premises. It warned of heavier economic sanctions than those already imposed over Crimea if Moscow failed to uphold the Geneva deal – or if it moved to send troops massed on the border into Ukraine.

"We believe that Russia has considerable influence over the actions of those who have been engaged in destabilising activities in eastern Ukraine," national security adviser Susan Rice said. "If we don't see action commensurate with the commitments that Russia has made yesterday in Geneva … then obviously we've been very clear that we and our European partners remain ready to impose additional costs on Russia.

"Those costs and sanctions could include targeting very significant sectors of the Russian economy."

'Guilty schoolboy'
President Vladimir Putin's spokesperson hit back, while voicing skepticism – of a kind also heard from the Ukrainian government – about how useful the cautiously worded Geneva pact would be.

"You can't treat Russia like a guilty schoolboy," said Dmitry Peskov. "That kind of language is unacceptable."

The Russian Foreign Ministry said: "The Americans are once again stubbornly trying to whitewash the actions of the Kiev authorities, who have embarked on a course of violently suppressing protesters in the southeast who are expressing their legitimate indignation over the infringements of their rights."

"He made clear that the next few days would be a pivotal period for all sides to implement the statement's provisions, particularly that all illegal armed groups must be disarmed and all illegally seized buildings must be returned to legitimate owners," the official said.

Ukrainian offers
Ukraine's interim government, in power since pro-Western protests forced President Viktor Yanukovich to flee to Russia two months ago, was at pains to show it was keeping its part of the bargain. Its ill-equipped security forces have shown little sign of being able to regain control in the east by force.

Prime Minister Arseny Yatseniuk, though admitting he was not overly optimistic about the agreement solving what has become the gravest East-West crisis since the Cold War, said militants would be offered an amnesty. And he and the acting president made a formal joint broadcast pledging constitutional reform to devolve power to the regions and bolster the status of Russian as an official language in areas where it was widely spoken.

Kerry called Yatseniuk and praised him for the amnesty and other measures taken by Ukraine to implement the agreement, the state department official said.

Russia has made much of the presence of far-right "fascists" among those who forced Yanukovich out in February. In Parliament, nationalists briefly tried to abolish a law allowing the official use of Russian, the first language of many in the 46-million population, and of a majority in the eastern regions.

Critics of Putin say that Kremlin-controlled Russian media have fueled unjustified fear of the new Kiev leadership in the east of Ukraine, where Yanukovich had his power base.

But Russia, which Ukraine and the West say is destabilising the new government in order to maintain and extend its influence over its most populous ex-Soviet neighbour, echoed the Donetsk militants in denouncing the authorities' failure to dismantle what is effectively an anti-Russian protest camp in Kiev.

'More concrete actions
The barricaded encampment around Independence Square, known as Maidan, played a crucial role in bringing down Yanukovich after he roused popular anger by rejecting closer economic and other ties with the EU in November. Now, hardcore activists on the square say they will defy any efforts to move them on until a presidential election has been held successfully on May 25.

Ukraine's foreign minister warned the militants in the east that they could face "more concrete actions" after the Easter weekend if they failed to cooperate with monitors from Europe's OSCE security body and start vacating buildings. But, he said, the Maidan was not an "illegal" occupation and so unaffected.

Russia's envoy to the European Union said Ukraine was misreading the Geneva accord, "in particular that it only applies to the eastern and southern provinces and those who are demanding federalism, but not to Kiev, where everything is legal including the ongoing occupation of Maidan".

The self-declared leader of all the eastern separatists said he did not consider his forces to be bound by the agreement.

Denis Pushilin, head of the self-declared Donetsk People's Republic, told journalists in Donetsk, the regional capital, that Lavrov "did not sign anything for us; he signed on behalf of the Russian Federation".

First, he said at a news conference in the heavily barricaded, occupied headquarters of the regional administration, Yatseniuk and Acting President Oleksander Turchinov should quit their offices, as they took them over "illegally" after Yanukovich was ousted.

"The Kiev junta is signing agreements and fulfilling none of them. They are provoking crisis," he said. "Turchinov committed a crime against his own people. We will keep going to the end."

But Alexei, a separatist in nearby Slaviansk, acknowledged that the Geneva talks may have changed the situation: "It turns out Vova doesn't love us as much as we thought," he said, using a diminutive term for Putin, who is viewed by many of the militias in occupied buildings as their champion and protector.

Fear, suspicion
Massive unknowns hang over the situation. Putin's ultimate goal may not be the Crimean-style annexation of Ukraine's industrial heartland, despite his comments in a major public appearance on Thursday in which he recalled that what is now eastern and southern Ukraine was the tsars' New Russia.

The Kremlin denies any ambition to take territory and many analysts believe it is principally seeking to influence events in Ukraine to ensure a favourable outcome in next month's election following the loss of Russian ally Yanukovich.

That in turn raises questions of the role of Ukraine's rich business "oligarchs" in the crisis and the election.

Conspiracy theories abound in Kiev, according to which the rich and powerful may be fomenting unrest behind the scenes to further their own ends or to curry favour with Putin, who holds sway over the Russian business interests of Ukrainian tycoons.

Suspicion of the elites whom they blame for robbing the national wealth and corrupting government and society for the 23 years of post-Soviet independence drives activists on Kiev's Maidan to insist they will not dismantle "self-defence" barricades until after they see a fair election next month.

"People will not leave the Maidan," said 56-year-old Viktor Palamaryuk from the western town of Chernivtsi.

"The people gave their word to stay until the presidential elections so that nobody will be able to rig the result. Then after the election we'll go of our own accord."

Weariness
As shrines to the 100 or so who died in violence on the square became a focus for Good Friday solemnity, when Christians mark the crucifixion of Jesus, many said that weariness after five months of protests would not break their will.

"Nobody will take down our tents and barricades," said 34-year-old Volodymyr Shevchenko from the southern Kherson region. "If the authorities try to do that by force, thousands and thousands of people will come on to the Maidan and stop them."

Right Sector, a far-right nationalist group at the heart of battles with riot police in February, saw the Geneva accord as being directed only at pro-Russian separatists in the east.

"We don't have any illegal weapons," said Right Sector spokesperson Artem Skoropadsky. "We, the vanguard of the Ukrainian revolution, should not be compared to outright gangsters."

Washington did not spell out what further sanctions it might place on Russia. With the EU, it has so far imposed visa bans and asset freezes on a small number of Russians, a response that Moscow has mocked. But some EU states are reluctant to do more, fearing that could provoke Russia further or end up hurting their own economies, which are heavily reliant on Russian gas. – Reuters