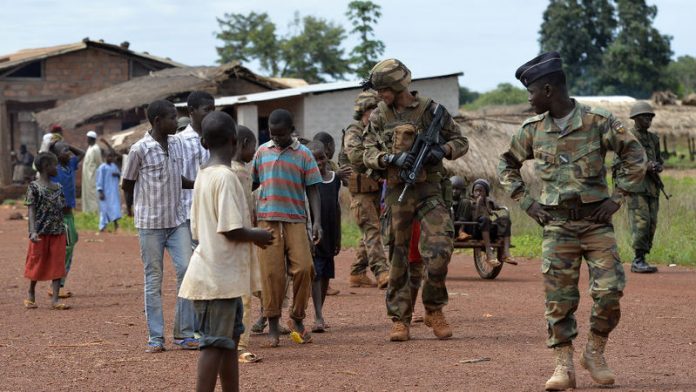 Some residents of the capital Bangui in the Central African Republic are openly nostalgic for the Bokassa era, which lasted from his military coup in 1966 until his overthrow in 1979, two years after a hugely extravagant coronation when the former soldier proclaimed himself emperor.

His fans point to his legacy in public works, including buildings, electricity supplies and transport, neglected by his successors in one of Africa's poorest countries.

Then he simply pointed around. "But that building there, the tar on the road and even that electricity pylon, they were Bokassa's work. Even if he was a thief, he did a lot of good."

A group of young people listening in voiced their approval – though it was not unanimous.

"Fine, but he was still a dictator," said one of them, Faustin.

Justice and equality
Jean-Bedel Bokassa was born in a village in 1921 and named after a saint, Jean Baptiste de la Salle. He became a rifleman in the French colonial army in 1931 and quit in 1962 after attaining the rank of captain and serving in Indochina and Algeria.

Still a soldier in the newly independent Central African Republic, Bokassa seized power on New Year's Eve 1965, proclaiming justice and equality for all.

But during his long rule he became infamous for brutality, torture and summary executions.

He was also seen as a stalwart backer of France's sometimes meddling activities in its former African colonies.

Dubbed "a trooper" by France's Charles de Gaulle, Bokassa declared himself president for life and marshal of the army. He also converted to Islam before organising a coronation modeled on that of Napoleon I, at an estimated cost of $20-million.

No heads of state attended the ceremony but France was represented by a government minister. Two of the six French horses brought in to haul the imperial carriage died in the equatorial heat, but guests were offered 60 000 bottles of champagne and Burgundy wine.

Then-French president Valery Giscard d'Estaing, who enjoyed hunting gazelles and other wildlife, developed close ties with Bokassa. However, when revelations emerged that Giscard had accepted diamonds from his African friend, the scandal contributed to his electoral defeat in 1981, when Francois Mitterand and the Socialist party swept to power in France.

"People were paid under Bokassa. The Central African army was stable and even set an example for other African countries," said a waiter at the decaying Hotel Oubabangui.

After more than a year of ethnic and religious violence that has claimed thousands of lives the troops trying to restore order come from other African countries and France.

The crisis erupted in March 2013 when the mainly Muslim rebels of the Seleka alliance overthrew the government.

They installed their leader, Michel Djotodia, as head of state but he stepped down last January under international pressure, accused of failing to halt the spiral of violence between the Muslim minority and the Christian majority, with atrocities on all sides.

"I was too young under Bokassa but my father spoke well of him to me, saying that he was a good president and a true nationalist," said the director of the national museum in Bangui, Albertine Ouaboua, in an office with neither a door nor windows. Like the rest of the premises, the room was badly damaged in recent strife and the museum is closed.

Ouaboua has not been paid for five months, but like countless others who have scraped by with no salary, she goes to work for fear of being sacked, she said.

Dania, a diplomat's daughter and hostess, gave another perspective on Bokassa.

"He killed a lot all the same," she said.

Notorious massacre
The French intervention that ousted Bokassa in September 1979 was in part due to his notorious massacre of about 100 children five months earlier, when they refused to wear costly school uniforms.

In Bangui, with its deeply rutted streets and crumbling bridges, a number of buildings mark out bygone times, including a 20 000-seater stadium built by the Chinese and the red-brick Roman Catholic cathedral, where street sellers still offer copies of the official gazette from Bokassa's day and books on the "philosophy" of his rule.

When an AFP reporter went to Bangui in November 1996 to cover Bokassa's funeral and the latest army mutiny, the following strange exchange took place on the way out of the cathedral.

Emu, a loyal supporter of the late ruler, said: "It will be better when he comes back."

"But he's dead," the journalist answered.

"Yes, I know," Emu replied. "But it will still be better when he comes back." – Sapa-AFP