Nepal gives in to some Sherpa demands to avoid Everest boycott 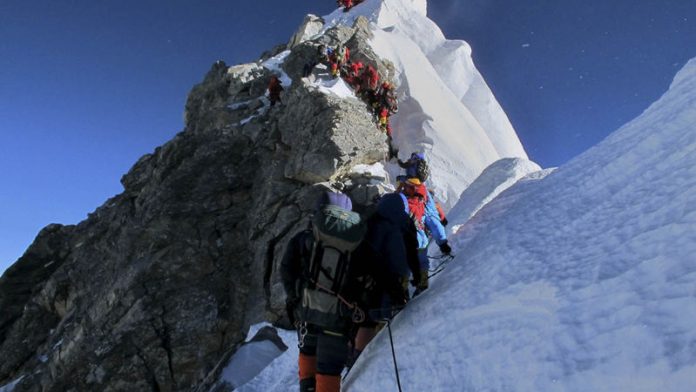 Nepal agreed on Tuesday to set up a relief fund for Sherpas who are killed or injured in climbing accidents, one of several key concessions to the mountain guides after Mount Everest's deadliest disaster.

The announcement by the tourism ministry came after the Sherpas threatened a climbing boycott unless the government agreed to adequate compensation. A boycott would throw the lucrative Everest climbing season into doubt.

Nepal appears to have agreed – at least in part – to many of the most important demands, although the funding falls well short of what the Sherpas wanted. There was no immediate official response from the Sherpa community.

Sherpa guides were hauling climbing gear between camps Friday when a chunk of ice tore loose and triggered an avalanche. Thirteen bodies were recovered and three Sherpas still missing are presumed dead.

The government quickly said it would pay the family of each Sherpa who died 40 000 rupees, or about $415.

The Sherpas said they deserve far more – including more insurance money, more financial aid for the families of the victims and new regulations that would ensure climbers' rights.

Pasang Sherpa, a guide stationed at Everest base camp, said he has not been informed of the government's position so he could not comment on it. But he said many Sherpas are agonising over whether to scale the mountain this year after so many deaths.

"The expedition teams want to continue because they are already here, already spent for their trip," he said.

"But they need Sherpas to continue."

The Everest climbing season provides livelihoods for thousands of Nepali guides and porters.

Climbers have long relied on Sherpas for everything from carrying gear to cooking food to high-altitude guiding. Without them, reaching the summit would be almost impossible.

If the Sherpas boycott the season, many of the climbers would have to forfeit most or all of the money they have spent to go up Everest, which in some cases adds up to $90 000.

At least one expedition company has cancelled the 2014 attempt for its six-member team.

"Our team members have empathy for the Sherpa community and we wish for everyone to be able to mourn their lost family and friends in peace," the Adventure Consultants Everest Expedition 2014 Team said on its website.

The ministry of tourism said in its statement the government had agreed to the following:

Since Friday's avalanche, expedition teams have declared a week of mourning with no trips to the summit.

Ang Tshering of the Nepal Mountaineering Association said about 400 foreign climbers from 39 expedition teams are on the mountain with an equal number of Sherpa guides, along with many more support staff such as cooks, cleaners and porters in the base camp.

More than 4 000 climbers have reached the top of the world's highest mountain since 1953, when it was first conquered by New Zealander Edmund Hillary and Sherpa Tenzing Norgay.

Hundreds of people, both foreigners and Sherpas, have died trying, and about a quarter of the deaths occurred in avalanches. – Sapa-AP