Tutu calls on South Africans to vote with their heads 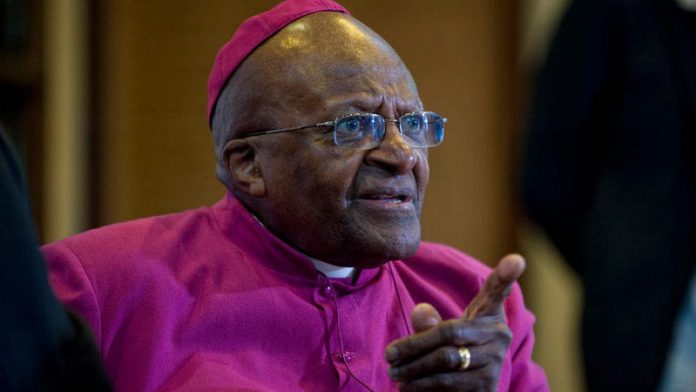 Archbishop Desmond Tutu has called on South Africans to apply their minds before casting their votes at the general elections on May 7, while reaffirming a statement he made last year that he will not be voting for the ANC.

"I have already said that I will not vote for them [the ANC]; that is something that I have said. And I say it with a very sore, very heavy heart because on the whole they have tended to be close to the kind of things we dreamt about," Tutu told journalists in Cape Town on Wednesday.

However, he would not say who he would be voting for.

"I pray that after May 7, we would all walk tall."

Tutu was addressing journalists about the 20 years of South Africa's democracy, following a "high number of interview requests from journalists".

He had no prepared speech and spoke briefly about the successes and failures of the ANC government over the past 20 years.

He said while he had never belonged to any political party, he had sought to support a party that would be as close as possible "to the sort of things that we would love to see".

"On the whole, the ANC was that." He then added: "Have you noticed the tense?"

"We dreamt about a society that would be compassionate, a society that really made people feel they mattered. You can't do that in a society where you have people who go to bed hungry, where many of our children still attend classes under trees."

Shaken  up
While saying that he is neither for nor against the Vote No campaign, Tutu said the campaign was shaking people up.

He said the campaign was targeting a particular constituency by saying they must think about their vote. "Don't just say, ah well, I've always sung these struggle songs and therefore when I'm going to vote … think!"

He said the fact that there has been a "virulent" reaction was an indication that some people are very concerned.

"One: you can't call into question the integrity of the people who have called for this; you can't call into question their struggle credentials and they are saying don't vote mindlessly, don't be voting cattle. Think when you're making that cross and remember that it is going to decide what quality of life you are going to have for the next five years."

Tutu, at times, spoke highly of the ANC's achievements but also sharply criticised its failures.

"I am going to recognise, not concede, but recognise the wonderful achievements, the fact that many more people have running water, that there is electricity for very many more people than it used to be, the social grants and we have the largest HIV programme … those  are significant feathers in the cap of our government," he said.

But added: "This is a country where we shouldn't read stories of a six-year-old falling into a latrine hole. It shouldn't happen. It unconscionable, it's a disgrace.

"This is a fantastic country with fantastic people. Let's make it become what it has in itself to become."

Pain
Tutu also spoke out for the first time about the pain of being excluded by the ANC government in the funeral programme of his friend, the late statesman, Nelson Mandela.

"I was quite astounded myself but I tried to pretend that I was humbled and didn't really mind. It was not true, I was very hurt. He was a very dear friend.

"We made up for it a little bit. I was asked to preach at a wonderful memorial held at the Westminster Abbey.

"They have the right to say who would speak, but I think they shot themselves comprehensively in the foot in snubbing me. It was sad," said Tutu.

He said he had refused a high number of requests for interviews about the 20th anniversary celebration because that kind of review was too close to the general elections and might have an impression that he wanted to influence the results somehow.

"The very fact of our going to be celebrating 20 years is a heck of an achievement that itself is a very good reason for all of us as South Africans to feel proud.

"When you look around the world, you realise that it isn't something that you could take for granted; there are some many turbulent parts of the world. We've notched up a very significant milestone and that we got to this point without a great deal of turbulence," he said.

Tutu said South Africans had to "give grace to God" for the remarkable quality of leadership, the Mandela crowd and many extraordinary examples.

"We have to admit that no too many of the successors of those leaders have been able to fill their shoes, but of course the shoes were too enormous," he said.