Malema cleared for Parliament … for now 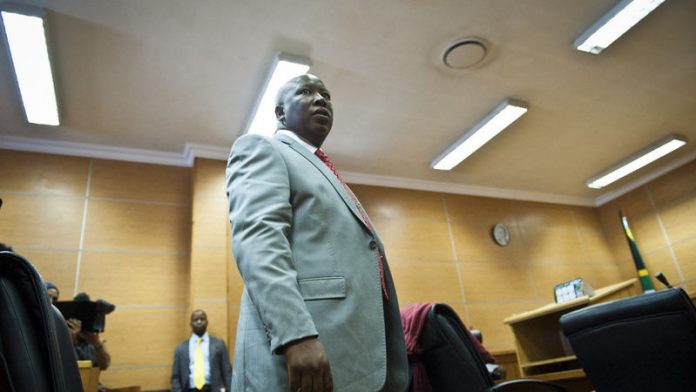 It's all systems go for Julius Malema to take his place in parliament after the elections – for now.

The leader of the Economic Freedom Fighters (EFF) is on Thursday likely to receive a certificate allowing him to be a candidate in the upcoming election, when the Independent Electoral Commission (IEC) is due to issue certificates to all successful candidates from the various party lists.

This means that Malema is set to remain at the top of his party's list and find his way into Parliament, despite the provisional sequestration hanging over his head.

But the R16.2-million he owes the South African Revenue Service (Sars) will continue to be a cloud over his head, as are separate criminal charges levelled against him. Either could deprive him off his seat in Parliament after a short time in the legislature.

It has long been Malema's contention that there is a political ploy to keep him out of government. Like the court application by Sars to have him declared insolvent, he claims.  Malema was placed under provisional sequestration in February this year thanks to that process.

Malema's whopping tax bill plus penalties was acquired over the years 2005 to 2011. His grace with the taxman rapidly ran out around the time he fell out of favour in the ruling ANC. He was finally expelled from the party in April 2012, losing his position as ANC Youth League president, after President Jacob Zuma soured.

Growing political career
It took 18 months, after many attempts by Sars, to file his outstanding returns. He also failed to register the Ratanang Trust for tax purposes, and Sars had to do this on his behalf.

But Malema has refused to let his change in fortunes slow down his revived and rapidly growing political career.

"I am going to Parliament," he told the Mail & Guardian in February – soon after Judge Bill Prinsloo ordered that the young political leader be placed under provisional sequestration.

Malema and anyone else who did not want the order to be made final had until 10am on May 26 to make representations.

Tax specialists the M&G spoke to originally said the sequestration was likely to disqualify Malema from Parliament's candidate list.

Section 47 (c) of the Constitution prevents "unrehabilitated insolvents" from serving as members of Parliament, while section 2 of the Insolvency Act defines an insolvent as "a debtor whose estate is under sequestration".

'He is automatically disqualified'
But while Malema's estate has been placed under provisional sequestration and trustees appointed, he is not disqualified, precisely because the sequestration is still provisional, said tax specialist and attorney Kerri Wilson, a senior associate at Webber Wentzel.

The same would hold true if Malema is found guilty on charges including racketeering and fraud in the separate court case and imprisoned for more than 12 months without an option of a fine.

Malema will appear in court in September on those charges, so he is free to be in Parliament while he is innocent until proven guilty – unless the sequestration is made permanent on May 26 and disqualifies him first.

Either way Malema is in a battle to stay in Parliament, and has a brief grace period to enjoy almost certainly winning a few seats in parliament thanks to his fledgling party's popularity, one of which will belong to him. After that, the battle will resume between him and the court action that could oust him from the national assembly.

The IEC has already cleared the way for Malema to qualify as a candidate, by dismissing any objections to his candidacy – and 44 others.

The body stated on Tuesday last week that only one of 45 objections against candidates lodged with the body was upheld. The M&G understood this was against a candidate from the National Freedom Party, based in Mpumalanga.

The disqualified candidate had been "convicted of an offence and sentenced to more than 12 months imprisonment without the option of a fine" according to the IEC, which according to section 47 of the Constitution means a no-go for a would-be parliamentarian.

Strategy to prevent being disqualified
The other objections – against parties that included the ANC, Agang SA, Congress of the People, the Democratic Alliance and African Christian Democratic Party – were not upheld.

"The way is therefore now clear for the finalisation of the candidate lists and issue of certificates to all candidates in terms of section 31 of the Electoral Act," said the IEC in its statement on April 15. "Certificates will be issued to candidates by April 24 2014."

One of those certificates will belong to Malema. It'll get him to Parliament, but it won't keep him there. Now Malema and his allies must start planning his strategy to prevent being disqualified from his future status as a parliamentarian.

Already, a trust was launched this month to collect funds to settle his tax bill. Five trustees, all EFF members, launched the trust, referred to as the JSM Trust.

The trust was formed in consultation with a team of professionals, including qualified attorneys, accountants and tax practitioners, who offered their services to the trust free of charge, trust chairperson Mandisa Mashego said at the time.

Malema has also sworn to appeal the sequestration if it made final. According to Webber Wentzel's Wilson, his status in Parliament would then be unclear and need specific legal counsel to determine.

"I will continue to challenge it up to the Constitutional Court because this is a political game," Malema said in February. "Now the sequestration is a last attack: They think that through sequestration they will prevent me from participating in Parliament. Like it or not they can see me there. I'm going to appeal that decision."

That's if he is unable to pay. His party was able to chump up the more than R600 000 needed to contest elections nationally and in every province, despite attempting court action to avoid paying the feeds. The EFF will have to pull the same trick to keep its leader in Parliament  – and pray for similar luck come September when his other court case is up.