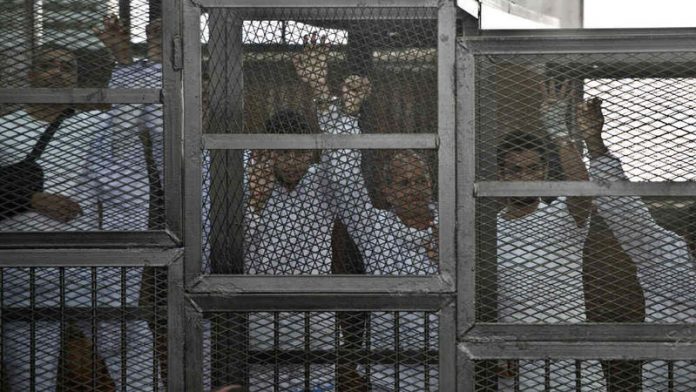 Three journalists working for Al Jazeera’s English channel will appear in court on Saturday, which is World Press Freedom Day. They are charged with aiding members of a “terrorist organisation”, with the Egyptian government saying they operated without proper accreditation. The state prosecutor accused them of publishing lies and supplying equipment and money to Egyptian nationals who were allegedly members of the banned Muslim Brotherhood.

There have been allegations of torture, with some detained journalists saying they had been physically abused and not been treated for their wounds.

A fourth Al Jazeera journalist, Abdullah Elshamy, has been on a hunger strike for 100 days. He was arrested in August, without trial. He began the hunger strike by only consuming water, milk, juice and two dates every day. Since March he has only been drinking water, with his weight dropping from 108kg to 74kg. He will also appear on World Press Freedom Day, where the judge will decide to either extend his incarceration or release him.

The news network has been campaigning to get independent medical assistance, but the request has so far been refused and he has not been seen by a physician. The International Committee of the Red Cross – which normally gets access to prisoners to make sure they are being properly treated – does not get this right in Egypt.

His wife, Gehad Khaled, has joined his hunger strike and said; “Many people talk to me about what may be happening to our bodies and what may happen to us in the future, but this talk doesn’t matter, because as long as our freedom is stolen from us, what is there to fear?”

Al Jazeera has also served the government with a $150-million compensation claim for stopping its operations in the country. In July last year the government detained 28 of its employees and shut down the channel’s Egypt bureau, in what it has said is a campaign to stop it covering the Arab world’s largest country.

Several international media organisations are supporting the movement to free the journalists, under the #freeAJstaff campaign. Al Jazeera says 40 000 people have been actively involved in the campaign.