ANC at pains to silence the booing 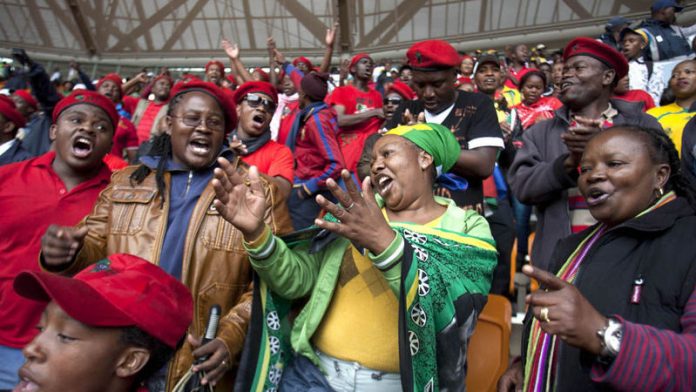 Boosting its fortunes and avoiding any booing of the president seems to be the priority of the ANC leadership at the party’s Siyanqoba (victory) rally at Johannesburg’s FNB Stadium on Sunday.

A nervous ANC has done everything in the security book to protect President Jacob Zuma from being booed once again at the stadium, where he was notoriously jeered at last year during former president Nelson Mandela’s memorial service.

The personal details of hundreds of thousands of supporters have been recorded, and the seating on Sunday will be arranged in such a manner that disrupters can be easily identified by party branch co-ordinators.

Even though Gauteng party leaders are confident that none of their members will jeer Zuma, they and Premier Nomvula Mokonyane, who is organising the rally, are making sure that party branches control supporters.

“We know the people who are in all the buses. We don’t expect anarchy, and we won’t tolerate it. Everyone who is coming has been with us on the ground, campaigning for the ANC. We will have a spectacular rally that no one has seen before,” Mokonyane said.

The ANC used the same method successfully when it launched its election manifesto at the party’s annual January 8 rally in Mbombela, Mpumalanga. Though Mpumalanga is one of Zuma’s strongholds, the rally was attended by ANC members from across the country, and critics could have made it to the venue.

At the time, ANC insiders said that a team of state intelligence operatives and police officers had been dispatched to Mpumalanga from as early as December to do groundwork and counter any move by Zuma’s detractors to embarrass him.

Last rally
The ANC traditionally convenes its last major rally the Sunday before the elections, with the aim of showcasing its support.

The rally is televised live and the party leader – in this case, Zuma – offers hints of the policy, style and substance of his government. Booing would distract attention from his message, and could weaken the president and the party’s confidence only a few days before the crucial poll.

Compounding his problems is the fact that Zuma is facing supporters in the heartland of a province – Gauteng – whose party delegates did not want him to serve a second term as ANC president.

A senior provincial party leader admitted that they do not want to be made the scapegoat if anything goes wrong, and will therefore do everything in their power to make sure the president is not booed.

Bus lists
“Anyone who tries to disrupt or engage in booing will be dealt with harshly,” he said on Wednesday, adding: “We have bus lists.”

However, the rally is organised by Mokonyane, a Zuma loyalist who was imposed as premier in 2009 against the wishes of provincial party leaders.

Mokonyane, who took over from Sports Minister Fikile Mbalula in organising this rally, will not want to disappoint. Complicating the situation is the rivalry that exists between Mokonyane and Makhura. Each is hoping to be picked for the premiership of Gauteng by the party’s national leaders – including Zuma – after next week’s election.

Mokonyane was careful about confirming that she is coming back to the Gauteng legislature. The premier is effectively elected by members of the legislature, even though in practice, she is nominated by the party. “The ANC will decide who to deploy when the time comes,” she said. Makhura refused to be drawn into the discussion.

The Mail & Guardian understands that the issue has been shelved by the party in order to focus on the elections, especially the final “rally of rallies”.

Memorial jeers
Zuma was jeered at Mandela’s memorial service at the FNB Stadium last year, and again in March at the same stadium when he officially handed the World Cup to the Brazilians.

Last month, the residents of the town of Malamulele in Limpopo, who are demanding their own municipality, booed Zuma at an ANC-organised rally when he told them that their grievances would be attended to.

The organisers of the final rally, particularly Mokonyane and Gauteng ANC leaders – the latter suspected by national counterparts of organising the December and March jeering incidents – have spent sleepless nights to ensure that their greatest political pageant is not spoilt.

“The stadium is already full with the number of people that we have organised,” she said. “Many other people will join us voluntarily. There will be three overflow areas not far from the stadium.”

Nkandla downplayed
She downplayed the disgruntlement over the exorbitant spending on security upgrades at Zuma’s Nkandla home.

“Less than 5% of the people that we interacted with during the campaign have raised concerns about Nkandla,” she said.

“In many areas, people don’t even raise the issue of Nkandla, but we … tell them that the president has instructed the SIU [Special Investigating Unit] to investigate the matter further.” – Additional reporting by Moshoeshoe Monare