Fire the ANC government with your vote – Zille 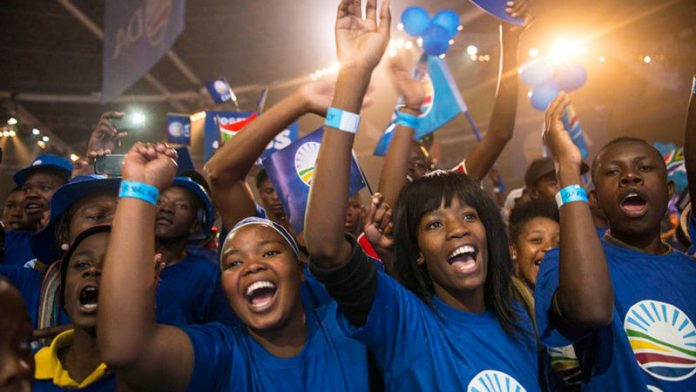 Held at the Coca-Cola Dome in Randburg, Johannesburg, the rally sought to convince those still undecided about where to make their mark on election day to choose the DA.

The party wrapped up its nine-week election campaign with a spectacular show in an attempt to secure more votes from South Africa’s fifth democratic elections scheduled for next Wednesday.

Zille told around 12 000 supporters that South Africans were responding positively to the DA’s “bluenami”.

“Hundreds of you are looking forward to voting for the DA for the first time on Wednesday,” she said.

Voter power
She reminded South Africans that any party leading government does so because voters gave it that power.

Zille accused the ruling ANC of becoming “arrogant” because the party believes voters will continue to vote for it, regardless of what it has done.

“Well, they are in for a big shock on Wednesday. Because everywhere we have been in South Africa the people have told us the same thing, iANC ayisafani [the ANC is no longer the same]. It has become corrupt and only cares about the few at the top.”

She pleaded with voters to “give us a chance”, saying the 2014 election, which has been billed as one of the big challenges for the ANC, comes down to two basic questions: “Is South Africa a better place than it was five years ago? Is your life better than it was in 2009?”

‘The blue machine’
Zille’s keynote address was preceded by those of other DA leaders that have been campaigning for the party in the past nine weeks.

Amid singing and dancing – most of the political songs the same as ANC songs, except for the leaders’ names – the DA’s leaders expressed confidence that the party would perform better in this election and grow its votes.

Deputy federal chairperson Makashule Gana, who said the DA was “four days away from making history”, stressed the growth factor as a sign that the party was now being taken more seriously.

“From a party that won less than 2% 20 years ago to a party that wins provinces in 2014 and continues to grow in every other province,” he said.

“Look around you. The DA is changing, the DA is growing. The blue machine is everywhere.”

He assured Zille that the DA would win the Western Cape again.

“You need not worry about packing anything, the people of the Western Cape will return you as the premier because you have delivered, you have improved their lives and will do even better over the next five years.”

The party already governs the Western Cape and has added Gauteng and the Northern Cape to its list of must-wins.

Gana said: “When we went to Premier [Nomvula] Mokonyane last week, we were not joking when we said she must start packing her belongings. On Wednesday, the people of Gauteng are going to vote for a new government.”

Gauteng premier hopeful
Gauteng premier candidate Mmusi Maimane concentrated on his campaign for this position, promising to create jobs, give people title deeds, hold a referendum that will vote e-tolls out, improve education and deliver the needed services.

One of Maimane’s most ambitious promises though, was that small businesses with promising ideas would “rent [office] space from the DA Gauteng government at just R1 a year.”

He told the Mail & Guardian that with the many buildings the Gauteng government already owns, this is achievable.

“Gauteng owns 55% of the land in the province and the buildings are there. If we spend less money on, for instance, the state of the province address, take R1-million and pump it into buildings, we will be able to subsidise small businesses. They don’t have facilities.

“Obviously as small businesses grow, they can’t continue paying R1 a year. We own the buildings anyway and they consume water and electricity, so let’s use them to create jobs.”

Soothing consciences
The DA sought to appease those who supported the late Nelson Mandela and his predecessor, former president Thabo Mbeki, but have become disillusioned with President Jacob Zuma’s government.

“Under presidents Nelson Mandela and Thabo Mbeki there was economic growth and development, and that meant more jobs. We did not agree with everything the government did, yet there was progress,” said Zille.

That was “a good story to tell”, but Zuma has destroyed all that, said DA Gauteng leader John Moodey.

DA parliamentary leader Lindiwe Mazibuko told party supporters that South Africa deserves better and that the DA was improving the lives of thousands in the 28 municipalities where the party governed.

The survey said that the ANC needed to “keep a close eye” on the Western Cape, Gauteng and the Northern Cape.