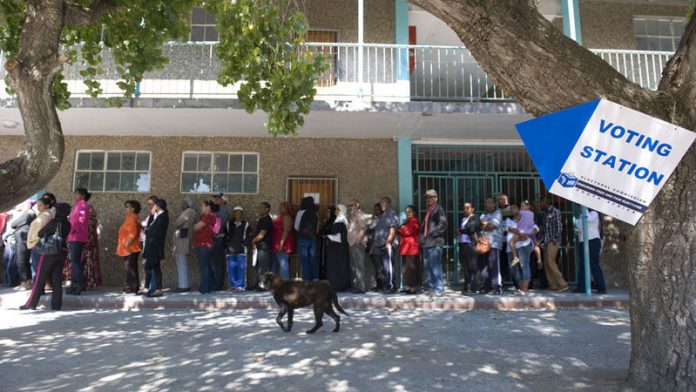 In the poverty-stricken Lentegeur suburb of Mitchells Plain on the Cape Flats, three men carrying copper wire sauntered past the voting station on Wednesday.

Asked whether they had cast their votes, they said none of them had identity books and they would not be participating in South Africa’s fifth democratic elections.

While Denzil Bailey and his friends are aware they are part of the elusive “coloured vote” the Democratic Alliance (DA), ANC and smaller parties such as the Patriotic Alliance have been scrambling to capture in the Western Cape, they appear to have lost hope in the future.

Bailey said they had spent the morning knocking on doors at the houses in the area, asking for old computer equipment so that they could dismantle them and retrieve the copper wire. The haul would probably bring them R50 when they sold it, he said.

“I’ve been in jail for escaping from prison and shoplifting,” said Bailey, rolling tape off the copper wire as he spoke. “I was guilty as charged, because I am unemployed and I have no work.”

Bailey said he and his friends were all matriculants and they had chosen not to join the gangs, which are rife in the area. “It is up to you in this place,” he said. “That’s not our scene.”

Limited opportunities
Opportunities in Mitchells Plain are limited because there is simply no work, said his friend Jason du Plooy, who at 24 is also jobless. “We all finished matric, but we can find no jobs,” he said, a sadness sweeping over him. “The government gives us no bursaries and so we cannot study.”

His story was similar to that of Sadley Cummings (32), who is jobless and has been trying to get a bursary to study further for the past six years. “I’ve trained as a street sweeper with the council, but still there’s no job for me.”

As the voting queue in front of them snaked around the Merrydale Primary School, the trio said they would head off to sell the copper on the streets in Lentegeur.

But even that is not easy, they explained, pointing to various wounds they had received after being attacked for the copper they were carrying on the streets. “They stabbed me here one time,” said Bailey, pointing to a scar on his head.

Looking at the voters milling about, Cummings said he did not want to vote for the ANC or President Jacob Zuma. “Zuma said his wife was raped. But he is coming out of things very good, he has a good place to stay. Things have not gone so right for the coloured people.”

While the ANC has acknowledged that winning the support of coloured communities is a precondition for any electoral victory in the Western Cape, these three men have followed political developments in the country and feel despondent.

The little money they will make on the sale of the copper would buy food and drugs, they explained. “We first buy ourselves something to eat. We must,” said Bailey. “Then we buy ganja.”

Cummings explained that the drug took the edge off their lives. “It is not the right way, but things are so limited for us. I mean, we have been trying so hard to get bursaries and study and get jobs, but today we still have nothing.”

In the voting queue nearby, Ivan Johannes (41), an unemployed painter, said he would be voting for the DA. “The DA don’t tell lies, they can help us with jobs,” he said. “The ANC has done a lot of things for this country. The Constitution is there, but they are not applying themselves to getting down to the people on the bottom, like here. They are involved in corruption. There is the black middle class, which is spending money and not creating the jobs.” The DA, said Johannes, must be given a further chance to succeed and improve job prospects for the people.

Voting patterns
In marked contrast with most of the other provinces, the ANC is an opposition party in the Western Cape and analysts say taking back the province from the DA will not be an easy task. The demographics of the province, and the coloured vote in particular, may help to explain the voting patterns, some analysts say. Coloured people make up 49% of the provincial population, according to 2011 census data.

In the Woodlands suburb in Mitchells Plain, where drugs and gangsterism are a big problem, the DA seems to have made large strides in securing the coloured vote. The blue wave is well established in this part of town.

Church caretaker Sophia Tromp (52) said she was devoted to DA leader Helen Zille and hoped she would one day see the upliftment of her family. “There is just something about Helen Zille, l like her. She has just done a great job, but some people don’t want to see it. She will do something for me, just you wait and see.”

Tromp’s friends, Ursula Paul and Gaironesha Mentoor, nodded wholeheartedly, saying the DA was also their party of choice and had long won over the coloured community.

Tromp and the others said they know the group of people outside the election station wearing Inkatha Freedom Party (IFP) T-shirts who were trying to persuade people to follow IFP leader Mangosuthu Buthelezi, but don’t worry about them. And they are equally unconcerned by others wearing ANC T-shirts, as political tolerance is strong in Mitchells Plain, they said.

For Tromp and her friends, that sums up the freedom they have acquired in the past 20 years of democracy in South Africa. It has not been economic freedom, as they say they are still poor – but they now have the freedom of choice, they say, to put their cross wherever they want on the ballot papers.

And, says Tromp, to shout about who they are voting for at the top of their voices, without fear.