Sundowns’ six-year wait is over 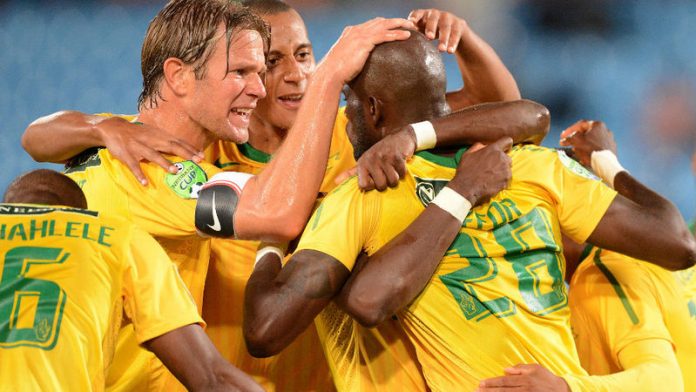 The Brazilians ended a six year wait for silverware on Tuesday as they were crowned Premiership winners at Loftus Versfeld, edging rivals SuperSport United 3-0 to ease to the title with a game to spare.

Moriri opened the scoring for the newly-crowned champions after half-time, following a dismal first half where Sundowns looked anxious and failed to execute their natural, free-flowing style of play.

Now in the twilight of his career, the 34-year-old is no stranger to title-winning campaigns, having already lifted two league titles – in 2006 and 2007 – before Tuesday’s success.

Well-used
Moriri has been with Sundowns for the majority of his stellar career, spending 10 years with the Pretoria club, who last won a trophy in 2008, when they lifted the Nedbank Cup. The former Bafana Bafana regular, who earned more than 30 caps for the national team, was well-used this season by coach Pitso Mosimane, who was rewarded for his faith in Moriri by claiming his first ever league title, having come close as coach of SuperSport United.

Moriri was ever-present from the bench during the championship winning campaign, but has started the last eight games in succession, after a number of injuries forced Mosimane to use his ageing playmaker more often than he would have anticipated at the beginning of the season.

Of the 10 games where Moriri was named in the starting line-up, Sundowns completed a clean-sweep, winning all 10. Humble as ever, Moriri chose not to highlight himself for his efforts, but instead praised coach Mosimane for the hard work and honesty that went into claiming top-spot before the season had even come to an end.

“Pitso has been good. One thing about him, he’s the kind of person who understands the culture of the South Africans and everybody,” Moriri said. “He always makes sure that everyone is on their toes and you can see it. He makes sure that each player gives his best and finally we’re celebrating.

“Pitso is open-minded and he doesn’t hold back. If you are wrong, he comes straight to you and he’ll tell you to your face that you are wrong. Whether you are a senior or a junior. And this is the kind of person that we want.”

Moriri’s teammate, Teko Modise, who scored the second goal on Tuesday, claimed his first ever league honour despite a glittering career which took flight while at Orlando Pirates, where Modise twice won the coveted Footballer of the Year award. “Winning this title will change the rest of my life. I need to set new goals but, for now, I’m just going to celebrate,” Modise said.

“After Surprise’s goal, things started opening up and we knew if we could get one, we’d get the second and the third.”

Continued support
Coach Pitso Mosimane thanked club president Patrice Motsepe along with the rest of the board of directors for their continued support en route to the team securing its first Premiership title since 2007.

“We’re a big team, we have to be criticised,” Mosimane said after the game. “I took the criticism as being positive, we had to fight. At one stage, we went four games without a win – we drew two and lost two in a row.

“The president called me to his house and said, ‘Coach, we’re second on the log, I’ve seen the worse in the last seven years from this team, so we are okay, just keep going’. I had support from the board, it’s unbelievable and you don’t fear [if you have that support]. I surrounded myself with the right people.”

Mosimane joined Sundowns in November 2012 with his side languishing near the bottom of the table and in serious danger of being relegated. But Mosimane steadied the ship, rescuing the Brazilians from the brink and guiding them to safety in his first six months in charge.

Fast-forward a year and Mosimane successfully steered Sundowns to their first trophy since Trott Moloto lifted the Nedbank Cup in 2008. “I told you [earlier in the season] that I would whisper to this sleeping giant and maybe one day it will respond,” Mosimane added. “I kept whispering and it responded. We are the champions and we deserve it.

“It’s important for me to win the league. I came close twice or three times with SuperSport United but we couldn’t win the league. You get judged on those things and I can now say that I have done that.”

Restless
The former Bafana Bafana mentor admitted he was restless heading into Tuesday’s crucial game, where a win would guarantee a trophy for the Chloorkop side’s cabinet, despite the outcome of Kaizer Chiefs’s simultaneous fixture against the University of Pretoria in Polokwane.

“Last night I didn’t sleep, it was difficult. I’m very tired but it’s normal, I’ve never been in this situation before, but tonight I can sleep,” he said. “I must thank the Premiership teams. They kept us on our toes, especially Wits. They kept driving us from behind, and Chiefs were very good.”

Four points clear of second-placed Chiefs heading into the final fixtures on Saturday, Mosimane said he was proud of his team’s points tally of 64, having surpassed the magical 60-point barrier, which in previous seasons has proved the benchmark for winning the championship.

“I thought two points a game would give us the league and I realised, two points per game doesn’t give you the league,” he said. “Chiefs have 60 points and they didn’t win the league.”

Bafana Ba Style, as Sundowns is known, end their season with a dead-rubber against Maritzburg United at Harry Gwala Stadium, but Mosimane was adamant he wanted to add another three points to their already impressive haul.

“We never choked, we kept going and the match in Maritzburg for me is important. All the training sessions will be the same. We need to be decent and bring the results.”

Mosimane becomes the first black coach to win the Premiership since the formation of the Premier Soccer League in 1996, and the first since Stan ‘Screamer’ Tshabalala in 1990, who lifted the trophy, also with Sundowns. – Sapa